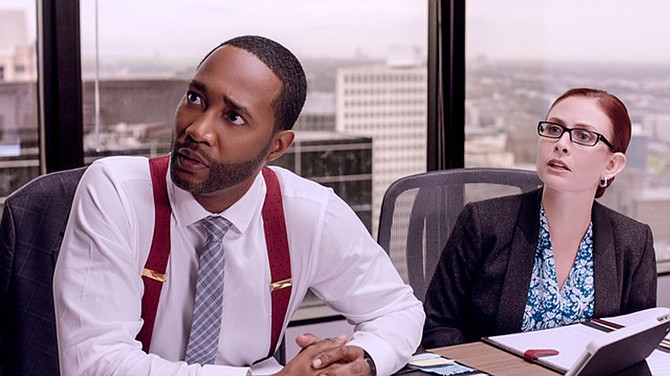 For actor Yohance Myles, "confidence in your faith and dreams" are the winning factors, he says, and not location.

While the 36-year-old actor lives in Ridgeland and teaches theater and film acting at Jackson State University, he also works in film and TV in New Orleans, Atlanta and Los Angeles, and on the Jackson stage, too.

Myles is in the crime-drama event series, "Shots Fired," which airs on FOX at 7 p.m. on Wednesdays. The show is about a small North Carolina town coping with two racially charged shootings and a U.S. Department of Justice inquiry. Myles plays recurring character Leon Grant, who is the father of an eyewitness to one of the murders.

"We're all on the edge of our seats, trying to figure out, 'How does it end?' I have no idea. I really don't," he laughs.

He is also in the cast of "Created Equal," a feature film about a nun's fight to become a priest in the Catholic church. That film premieres on April 29 at the Sunscreen Film Festival in St. Petersburg, Fla. Myles plays defense attorney Willis "Silk" Thompkins, a lead role alongside actors Lou Diamond Phillips, Aaron Tveit, Edy Ganem and Gregory Allen Williams.

Myles grew up in Birmingham, Ala., where his school band and drama inspired an early passion for performance in him. He says Denzel Washington's work in "John Q" as a father who goes to any lengths to help his sick son was also a key inspiration.

"It stuck with me for years," Myles says of the role. "I told myself, 'Those are type of stories I want to do.' ... I want to be able to touch people the way he did for me."

Myles moved to Mississippi in 2010 after finishing his master's degree in acting at Louisiana State University. His mentor, Alabama State University College of Visual and Performing Arts Dean Tonea Stewart, suggested that he apply to schools in Mississippi. Fans will also know Stewart from her roles in films such as "A Time to Kill" and TV shows such as "In the Heat of the Night."

"It didn't dawn on me until I got hired (at Jackson State), 'Wait a minute. I'm right here at the heart of where Dr. Stewart started her entire career,'" he says. He says Stewart started the theater program at JSU.

In addition to his television and movie roles, Myles has been active at New Stage Theatre, acting in plays such as "A Time to Kill," "The Whipping Man" and "Best of Enemies," which he says has helped to fulfill his goal of developing memorable characters in relevant stories.

"Those plays plus 'Created Equal' and 'Shots Fired' are stories that have something to do with the times we live in, how it affects and shapes America, our culture," Myles says. "It deals with race; it deals with religion; it deals with equality. So, these are all projects I'm proud of, ... work I can look back on and share with my family and say, 'Let's watch this. This is what I've left behind.'"

Myles is married to former Miss Mississippi Kimberly Morgan and is the father of five: Maliq, 16; Miciah, 14; Christian, 12; Bella Grace, 1; and Jackson Morgan, who is expected to arrive in late May or early June.

While New York or Los Angeles residency might give him more consistent acting work, living in Mississippi allows more time with family, he says.

"Raw talent is bred right here in the South," he says. "I wouldn't trade it in for anything."