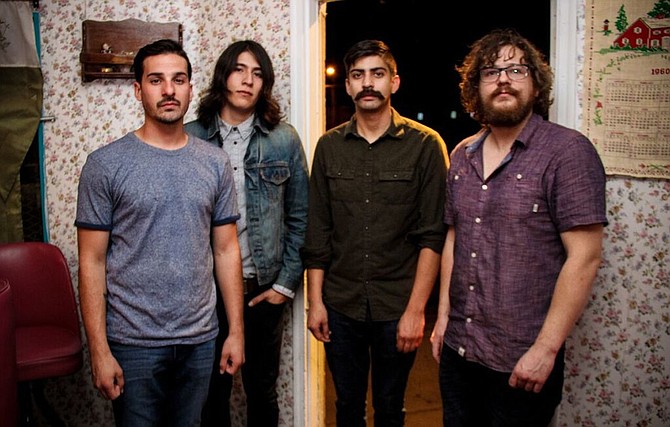 For Texas-based indie pop-rock quartet Great Shapes, the band was something of a happy accident.

The group formed in 2013 out of two other bands dissolving, leaving the members searching for a new outlet. Vocalist and guitarist Neil Henry, drummer Evan Tremper, synth-player and guitarist Nathan Gomez, and bassist Antonio Salazar, as well as former members George Rodriguez and Adam Gutierrez, all knew each other from the El Paso, Texas, music scene.

After their previous acts, The D.A. and Lies of Legends, disbanded, the musicians joined as Great Shapes, which blends pop-rock and inspiration from acts such as Foals, LCD Soundsystem and Modest Mouse, to keep their love of music going.

Henry says one important facet of Great Shapes has been treating the band like a record label in itself. The members handle every aspect together, from songwriting and creative development to show promotion and tour scheduling. Henry says Great Shapes also has to be aware of the trappings that "indie" classification brings and says it can be difficult for an indie band to stand out from the crowd.

"I think it's hard for any local band not to fall into that category nowadays," Tremper adds.

To keep from becoming "any local band," Great Shapes works to create polished arrangements with high production value, while also attempting to find a sound that sets the group apart.

Despite that aim for a distinct sound, Tremper says the group isn't afraid to experiment, something seen in full on Great Shapes' latest release, "Brightness," which hit iTunes and Spotify on Sept. 9. The song is the follow-up to the band's debut EP, "Murmaration," from May 2015.

Henry, who wrote the lyrics for the song, says "Brightness" is about searching for a moment of happiness when things seem to be at their worst.

"Everybody's in a dark spot at times, you know," he says. "And to know that there's so much beauty and light in the things that are around us, ... that would be more encouraging to be—I don't know—more positive about things."

Tremper says touring has also been a major part of the band's identity. The musicians' current tour, which stops in Jackson Oct. 1, sees them performing all across the South, with shows in major music cities such as New Orleans, La., Nashville, Tenn., and Orlando, Fla. Temper says one of Great Shapes' notable achievements was playing at last year's CMJ Music Marathon, a festival in New York City that put them onstage at several iconic music venues.

The members of Great Shapes are also quick to point out one of the reasons they enjoy touring in the first place: meeting new people in new places. Henry says he tries to emphasize those relationships and reach people in his lyrics and the band's songwriting in general.

"I think the most challenging part is just trying to capture the listener's attention and have them put themselves inside your shoes," Henry says.