City of Ridgeland Agrees to Stop Seeking Removal of Apartments

JACKSON, Miss. (AP) — A Mississippi city has agreed with federal officials to stop trying to zone 1,400 apartments out of existence.

The U.S. Department of Housing and Urban Development, which had filed a fair housing complaint against the city of Ridgeland alleging racial discrimination, announced the settlement Wednesday. 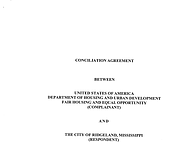 The Madison County city changed zoning in 2014 to require owners to gradually demolish many of the units in large apartment complexes. Those complexes have mostly African American and Hispanic tenants. Ridgeland agrees in the settlement to repeal the 2014 rules and create an affordable and fair housing marketing plan.

The case is the highest profile in a series of zoning restrictions that could reduce affordable apartments and mobile homes in Jackson's suburbs.