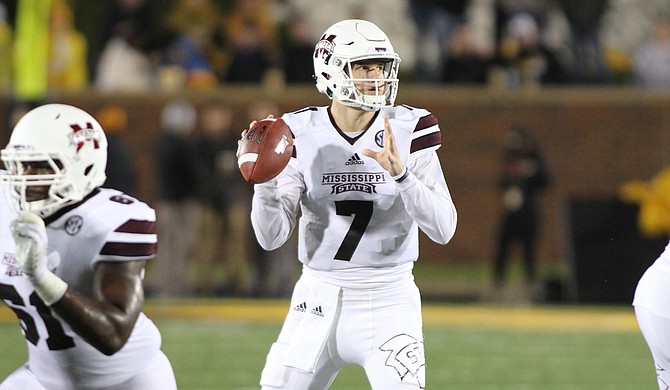 OXFORD (AP)—Mississippi State University coach Dan Mullen arrived at the postgame press conference with a wide smile on his face and a cigar in his right hand.

It was unlit. He said that wasn't the case in the locker room.

The Bulldogs had good reason to celebrate on Saturday night following a dominant 55-20 road victory over their rival, the University of Mississippi, in the Egg Bowl.

Mississippi State quarterback Nick Fitzgerald ran for a school-record 258 yards and two touchdowns, and also threw for three touchdowns to bring the Golden Egg trophy back to Starkville after two years in the Rebels' possession.

The Bulldogs (5-7, 3-5 Southeastern Conference) have won five of eight Egg Bowls under Mullen. This rivalry victory—in front of 66,038 fans on the Rebels' home turf—was particularly impressive.

The Bulldogs finished with 457 yards rushing and averaged nearly 10 yards per rushing play. Running back Aeris Williams added 191 yards rushing and two touchdowns, but it was Fitzgerald who had the biggest gains, including runs of 70 and 61 yards.

"It's a phenomenal feeling," Fitzgerald said. "It's always great when you're running and no one's around you. To do it in a big time game like this in front of this crowd—it's unreal."

Mississippi State jumped out to a 27-10 lead by midway through the second quarter, largely thanks to big running plays for Fitzgerald and Williams. UM has struggled with its linebacker play all season, and the Bulldogs were eager to exploit that weakness in the middle in the field, hitting the Rebels again and again for big gains.

UM rallied late in the second quarter with 10 consecutive points to pull within 27-20 by halftime, but MSU outscored the Rebels 28-0 in the second half. By the fourth quarter, Vaught-Hemingway Stadium was strangely quiet except for a small contingent of Mississippi State fans who cheered every moment.

"It stinks, and I hate it for the fans, the university, the seniors and everybody involved with this program," UM coach Hugh Freeze said. "It's a very disappointing night."