Justices Mull if Judiciary Has Role in Legislative Dispute

JACKSON, Miss. (AP) — The Mississippi Supreme Court said Monday that it wants to hear arguments about a lawsuit a Democratic lawmaker filed earlier this year against the Republican House speaker.

Freshman Rep. Jay Hughes of Oxford sued Speaker Philip Gunn in March to try to block the speaker from using a rapid setting for a computer-generated voice that was reading bills aloud in the House chamber.

Several Democrats had requested the reading as a filibuster tactic to express dissatisfaction because they believed their concerns were being ignored in the chamber where Republicans hold a three-fifths supermajority.

On Monday, justices said they will consider whether the judiciary should get involved in such a legislative dispute. They set June deadlines for attorneys on each side to file arguments in the case, with oral arguments July 19. 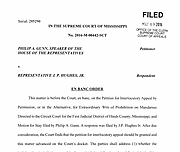 Hughes said in an interview Monday that he was concerned about some justices questioning whether they have jurisdiction over a constitutional question: "Who determines whether there's a violation of the constitution if not the court system?"

A spokesman for Gunn could not immediately be reached Monday. Gunn and Hughes are both attorneys.

Justice Ann Lamar recused herself from participating in the case. Her son is state Rep. Trey Lamar, R-Senatobia.

Two justices — Leslie King and Jim Kitchens — disagreed with the Supreme Court's decision to take the case on appeal. They said instead that the lawsuit should be allowed to move forward in circuit court, where a judge could consider several questions, including whether the House speaker has the authority to determine constitutional issues. A section of the state constitution requires that a bill be read aloud at the demand of any legislator.

House Democrats said they were having bills read aloud because they believed Gunn had promised to kill a bill that would expand the Jackson airport board to add members from suburban counties. Gunn said he never made such a promise. Republican Gov. Phil Bryant signed the bill into law last week, but a lawsuit has been filed to challenge it.

On the day Hughes sued him, Gunn criticized Democrats for having bills read aloud.

"You know good and well the only reason they're reading bills is to try to slow the process down," Gunn said then. "Every one of them in here can read. Every member can read."