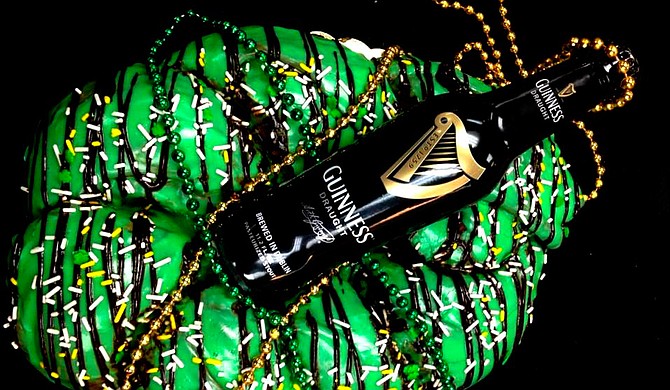 On the day of the parade, March 19, Jaco's Tacos will host the Bluz Boys from 2 to 6 p.m., followed by a dueling piano bar in which two piano players will take requests and organize sing-a-longs from 6 to 9 p.m. From 9:30 to 11 p.m., a local deejay will host a light show in the restaurant's side parking lot.

At Burgers & Blues' St. Paddy's Day Blowout, Stormy Monday Blues Band will play from 1 to 5 p.m., and Drivin' South will play from 6 to 10 p.m. The event will also have a cornhole tournament and all-day drink specials.

For St. Patrick's Day, Primos will have themed iced cookies.

St. Paddy's Parade at St. Alexis is from 9 a.m. to 6 p.m. The festivities will include free hot dogs, and porta-potties and hand-washing stations. The parade finishes beside the church. Visitors can bring folding chairs and ice chests.

On St. Patrick's Day, March 17, Fenian's will be open from 11 a.m. to 2 a.m. It will serve a special menu that features traditional Irish food and bar bites. On the day of the parade, March 19, Fenian's will have a parade pre-game Irish breakfast buffet that will feature eggs, baked beans, fried potatoes and more for $10 all you can eat. It will also have Irish food and bar bites all day. The block party outside will have green beer. The winner of the bar's open-mic competition performs 6 p.m. to 7 p.m., then Bill Shakespeare from 7 p.m. to 9 p.m., and The Bailey Brothers from 9 p.m. to midnight.

The Iron Horse's St. Paddy's Parade after-party will have live music from Kenny Brown, Jason Turner and Cary Hudson. The music starts at 3:30 p.m., and the event has no cover charge.

For St. Patrick's Day, Campbell's will have shamrock-shaped teacakes.

On the day of the parade, March 19, The Hideaway will have a parade after party that will feature Spank the Monkey and Splendid Chaos. The doors open at 8:30 p.m., and the cover charge is $10.

On March 19, South Street will have its inaugural Shamrock Throwdown. The event will have performances from Chad Wesley Band, Bishop Gunn and The AM/FM. The doors open at 4 p.m., and the event ends around midnight. The cover charge  is $15.

On March 19, Ole Tavern will host its seventh annual St. Paddy's Throwdown. It will have live music from King Edward Antoine in the downstairs area and The Whiskey Barrels in the upstairs area. Outside, it will have music from DJDVD Reign with 3D visuals from Videonauts and DJ Glenn Rodgers. The doors open at 2 p.m. and will have food and drink specials all day.

March 19, McB's will have a shuttle that will go from the bar to One Block East for the parade and will return to McB's after. Andrew Pates will play live at the bar from 5 to 9 p.m.

For the day of the parade, March 19, T'Beaux's The Shack location will have crawfish for pick-up. For specials and pricing, find the business on Facebook.

From March 15-19, Broad Street will have a St. Paddy's Guinness-chocolate king cake filled with chocolate Bavarian cream, Guinness beer and Bailey's Irish cream. The bakery will also have other treats such as clover cupcakes, themed cookies and more.