Inside 'Mason's Inn': Life, Lockup and Learning Inside the Raymond Jail 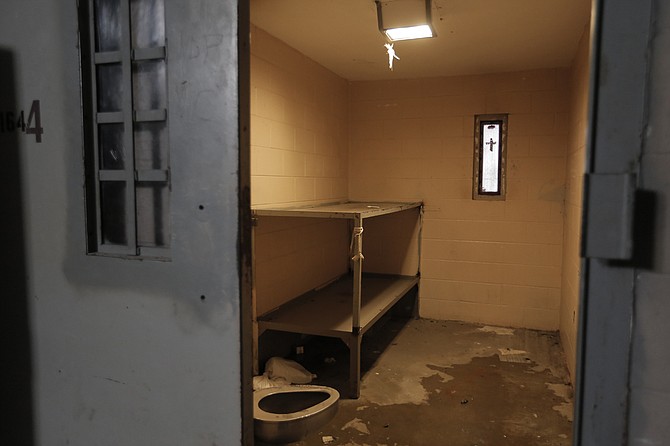 Inside each cell are bunk beds and a single toilet. Windows and weak spots in the walls have been fortified with sheets of steel. Photo by Imani Khayyam.

JACKSON — A hazy stream of daylight filters in through a skylight over Unit 1, Pod A, in the Hinds County Detention Facility in Raymond. The burst of light catches dust motes in the air before settling on a pile of dirt, an empty water bottle and a ripped bag of chips, all remnants of the previous inmates who were housed here and the workers who are making repairs.

Hinds County Sheriff Victor Mason steps around a box that lies atop another dust pile and walks into a cell. There's a subtle swagger about him—a sign that he's sure of his ability in his new role as sheriff and the staff he has assembled. He says that Pod A construction should be complete in a matter of weeks and points at a window with a newly welded steel sheet with holes in it, plugged in the center into something that closely resembles  a cross.

Scrawled in blue ink on the wall beside him, an inmate has written, "Trust God. He will get U out wen nobody else will(sic)."

The Hinds County Detention Facility is an all-male jail that houses about 430 inmates, fewer than 20 of them juveniles. At maximum capacity, the center can hold nearly 600 inmates, but with Unit 1 out of commission due to repairs, the numbers are closely monitored. A riot in 2014 left one inmate dead and multiple injured, and the unit was damaged, requiring extensive repairs.

Mason, who took over Dec. 30, 2015, has made it his goal to make repairs, keep both inmates and officers safe, and teach inmates the proper tools to succeed so once released, they don't end up back inside, he says.

The jail offers a biblical studies program, and currently, he says he is coordinating a GED program for inmates and a father-son initiative for juveniles, as well as vocational programs to teach inmates trades like electrical work and carpentry.

'Inside Masons Inn' Life, Lockup and Learning Inside the Raymond Jail Gallery

Inmates here are classified by the crimes that they've committed: arson, burglary, rape and murder. Inside the units, they can be seen shuffling around during recreational time in various colored jumpsuits such as a muted green for trustees—individuals with minor offenses such as old fines or misdemeanors who have a small amount of time left and are allowed to work outside of the pod-— or a striking red for most violent offenders.

Mason says he has gotten a few complaints from inmates who are a part of the LGBT community, as well as gang members who have been put in a unit with rival gangs, but he's going by the rules the U.S. Department of Justice has implemented. Inmates are housed together by the crimes they have committed, which can cause problems if there are gang affiliations that haven't been severed. Mason says an inmate was caught recently with a shank almost a foot long, and when asked, the inmate told him he feared for his life.

While the sheriff understands that his inmates are human, he says that he also has to look out for officer safety. "You don't want to be defenseless when something starts, so you want to be sure that you can defend yourself so that no one gets hurt or killed," he says.

"You can't turn your back on anybody, but they've got to learn that they are in here for a reason."

Currently, the detention center has training programs to teach officers how to defend themselves, whether with physical measures or defensive tools like a Taser. He hopes by late spring to have more programs in place such as sensitivity training to handle transgender inmates.

"We are in the process of moving forward to getting our guards prepared for defensive measures," he says. "We have general orders, and those are the instructions that we live by daily. I will see to it that we are retraining everyone on everything, so you can't say that you didn't know the rules of the house."

A few detention officers who spoke to the Jackson Free Press noted that since Mason has taken over, morale has increased, and stress is minimal. Mason says he isn't a micromanager and trusts that his staff can handle their jobs well. As a visitor walks around the jail, every staffer seems willing to reach out and shake his hand, and most seem to brighten when he walks into the room.

'The Devil Made Me Do It'

Inside the detention center's front door is a room filled with beige and burgundy seats all melded together into long rows where families can sit and wait for scheduled visitation times. Visitation here isn't like in the movies; they must be scheduled in advance. Inmates are only allowed to visit using a telephone and a computer screen where they sit in one room and the visitor is in another. This keeps down the likelihood of smuggling in contraband or lingering touches that aren't allowed.

Multiple doors separate the inmates from the outside world, and while they're always locked, someone is always watching and manning the panel of keys that controls every door here. Inside the main control room, which is in the far corner of the booking area, is a wall of television screens, each one split in different ways to show real time images of the jail. On the screen, a van has pulled into the jail, and within minutes, new inmates are lined up outside the room. The officer sitting in the control room taps a few buttons with an almost innate skill and in an authoritative tone tells them to look forward. They oblige.

Near the heart of the jail is the "gray hall." It is a long stretch that connects the pods to the rest of the facility. It's cold and empty, except for the group of newcomers who huddle close to the wall, only allowed to walk on the gray lines. The hallway is always quiet, and when they are off their shift, sometimes officers will walk the hall a few times for exercise. Four laps around is a mile.

Something about the gray hall feels almost like criminal purgatory, the gap between inmate and officer or inmate and visitor. It's stark white, red brick and gray, and usually the last bit of something pure and clean an inmate sees.

Inside the pods, everything is muted in grays and browns, save for the jumpsuits they wear. With a bunk bed sleeping two in each cell, it's cramped inside, and a metal toilet sits in the corner without a door or curtain for privacy. The shower is outside in the common area.

Every pod has an isolation cell in case an inmate needs to be separated due to protective custody or for other inmate's safety. Juveniles are grouped into a separate unit all on their own, and the day one turns 18, he is added in with the general population. There are full medical services at the jail inside one of the pods. When inmates have medical issues, they are taken from their pod and placed into the medical unit. If the health concerns are serious, such as heart problems, the inmate is taken to a major hospital.

Due to safety concerns, the facility doesn't have a cafeteria. All inmates eat in their units. They are allowed recreational time during the day, which is done in two shifts, where they share one television, can shower, play board games, socialize with each other and read. Most tend to stay in their cells.

It's easy to forget that the inmates are real people with a history, family and ambitions, but Mason tries to meet with a few of his inmates when he can to learn what led them down a path to Raymond, he says. The most disheartening case he's had so far was of a 24-year-old inmate who walked off work detail away from the prison with less than a month left to his sentence.

The man, whom Mason did not name, was expecting his third child. One day, while on work detail he asked the supervising officer permission to use the restroom. He began walking down a hill, and while the story varies from officer to inmate, he told the sheriff that once he'd gone too far, he stopped and began crying. Before he could turn around, something prodded him to move forward.

When the sheriff asked him afterward why he didn't come back, he responded, "The devil made me do it."

Past the main facility, down a paved road and around a hill sits the Hinds County Joint State-County Work Center where a mixture of Mississippi Department of Corrections inmates and Hinds County inmates reside. Inside, they keep them on either sides of a long hallway, and inside their rooms, it's crisp and neat. Each inmate has his own bed and small television screen, and unlike the main facility, they have multiple sinks and a bit more privacy in the shower. Inmates huddled around the main television, wrapped in blankets over their jumpsuits, while others brushed their teeth. On one of the small tables where inmates can play board games is an unfinished round of checkers, pieces strewn across the board like a life deferred.

Under the previous administration, the work site lost the MDOC inmates, but Mason worked with Mississippi Corrections Commissioner Marshall Fisher to gain them back under the stipulation that Mason must create programs to teach the inmates life skills or a trade. Now, he has about 50 workers who either do on-site detail or road work.

The facility has a garden, and inmates can wash cars, cut grass or do cleanup inside the jail to work off their fines. The work site offers a bit more freedom because those housed here have old fines and misdemeanors and aren't considered to be dangerous.

"They know what to do and what not to do," Mason says.

For now, Mason says his goal is to finish the repairs on Unit 1 in Pod A and get his programs off the ground. He doesn't want to see any inmate earn their freedom and then end up right back in Raymond. "We want to reach and touch everybody, not only to keep everyone safe, but to keep others from coming down to our facility," Mason says.

"We're the Mason Inn," he says. "We'll keep the light on for you," the sheriff adds.