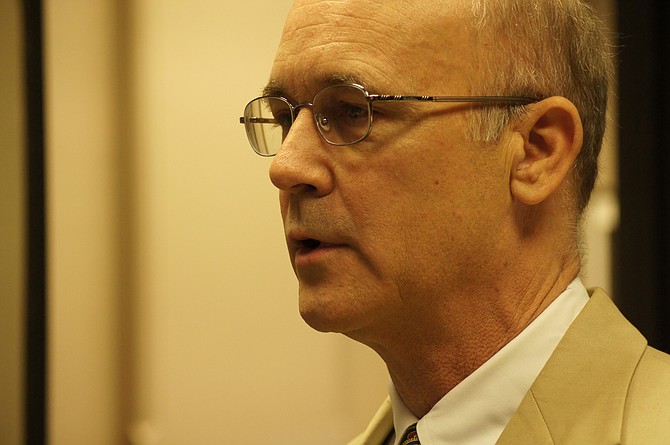 Tuesday's Senate session rang with reprobation from Sen. Hob Bryan, D-Amory, who spoke bitterly about Mississippi First, a group that he says acts as a front group for charter schools.

Bryan's admonishment of the pro-charter organization followed his equally disapproving words against Senate Bill 2161, which will head to House of Representatives after the motion to reconsider was tabled on Friday. The bill would not only allow the establishment of charter schools in "C" school districts like Hinds County School District, but will also allow students to cross district lines to get there.

The amendment, written by bill sponsor and Senate Education Committee Chairman Sen. Gray Tollison, R-Oxford, would also require the Mississippi Department of Education to pay the charter-school ad-valorem receipt and per-pupil dollars if the student does not reside in the same district as the charter school. 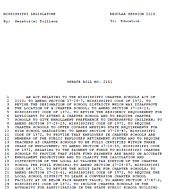 Tollison said today that this bill would open up different school options to under-performing students in every district in the state. He praised charter schools, saying that they are providing alternate education systems for those students.

"There are a lot of states ahead of us in this, and as I said, it's just a different model of learning," Tollison told the Senate Friday.

Bryan responded today that the bill favors students who reside in wealthier districts with higher property values and potentially could send taxpayers' property taxes to a different district.

In both cases, the school districts would see a reduction of their January transfer of Mississippi Adequate Education Program funds by how much of that money would be rerouted to charter schools.

"I am perplexed as to why this provision is in the bill because there's not any need to do this in order to have the charter schools except to penalize public schools," Bryan said to the Senate at large on Tuesday.

But Tollison stood strong. "This is only going to happen where the school is not getting the job done," he said on Tuesday. "Why would we let kids remain in schools that are failing year after year?"

Presently, 80 percent of a charter school's free and reduced lunch population must reflect the school district's numbers of those students in which the school is located. Tollison's amendment adds that a charter school "may given enrollment preference to underserved children" to ensure they meet this requirement. Tollison assured the Senate that the bill did not create a sort of voucher program with charters on Tuesday.

"You can throw out all the buzz words you want, this is not a voucher program," Tollison continued. "This is public money going to a public school."

Bryan views the bill as the beginning of the proliferation of charter schools in the state—which only has two charter schools, both located in the Jackson Public Schools district.

"This is only the first step, charter schools are going to proliferate," Bryan told the Senate this morning. "They're going to have for-profit vendors; they're going to contract with for-profit people ... this is where all of this is headed."

Rachel Canter, executive director of Mississippi First, responded to Bryan's words about her organization today. "All I can really say is that I have long admired Senator Bryan's deep personal passion for public education," she said in a phone interview. "We are an organization that was founded to support improvements to public information and support that passion. We have deep disagreements (with Senator Bryan) about charter schools."

The Senate charter-school bill was originally held on a motion to reconsider on Wednesday, but this morning that motion was tabled by a voice vote, and the bill will head to the House of Representatives for consideration.