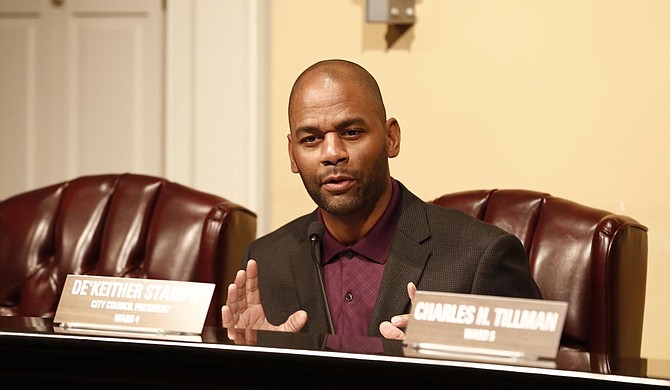 Ward 4 Councilman De'Keither Stamps cast the only vote in favor of the declaration. Photo by Imani Khayyam.

The second attempt at declaring a civil state of emergency failed at a special meeting of the city council Tuesday, March 1, with Ward 4 Councilman De'Keither Stamps as the only vote supporting it.

The failure to pass the resolution comes at the end of a week of efforts by the City to address concerns by citizens in the wake of a press release from the Mississippi Department of Health warning expectant mothers and small children away from the tap water. The City's Communications Director Shelia Byrd held meetings with media and community stakeholders to reiterate the administration's position: The water is safe to drink.

The warnings led to questions and a press conference from Jackson Public Schools District President Beneta Burt, where she reassured parents that the board would be testing their water, encouraging them to send bottled water with their children if they wanted. It also caused concern in the local business community, with restaurateur Jeff Good announcing that his restaurants will all start filtering their water.

As talks about filters, pipe replacements and bottled water continue to dominate the discussion, there is also the question of paying for testing and preventative measures in parts of Jackson that traditionally have lower-income families. The failed proposed declaration of civil emergency would have requested assistance from several federal and state agencies.