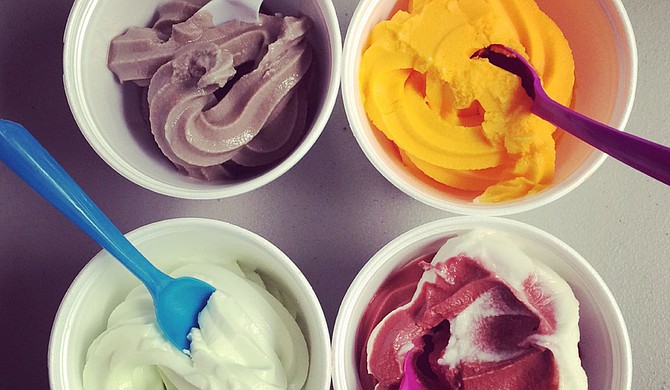 Fondren Fro-Yo has flavors such as triple chocolate, orange sorbet and key lime, and swirls such as red velvet wedding cake, though flavors change each week. Photo courtesy Kristin Brenemen

When customers walk into Fondren Fro-Yo, which recently opened in the Jackson neighborhood, bright colors, designs and topping dispensers surround them. The business, which is Jackson's first independently owned one of its kind, has seating both inside and outside depending on the weather, and familiar songs play softly in the background. Located off Old Canton Road, Fondren Fro-Yo sits at the entrance of the neighborhood and occupies a once-desolate side of Old Canton Road.

The space that Fondren Fro-Yo now occupies previously housed GLO Design Studio. After owner Anthony Ritter moved GLO upstairs five years ago, the space transformed into an office and storage area, but none of the business ventures was a good fit for the area. Then, last summer, came the idea for Fondren Fro-Yo.

Pop Culture Pops was interested in the space for their storefront; however, after the business got the space in the Pix/Capri Theatre, Ritter had the idea of bringing frozen yogurt to Jackson.

"We wanted to bring something to that all of Brandon, Flowood and Madison already have," Ritter says. "We don't have anything in Jackson like this."

Betsy Mullins, Ritter's business partner for Fondren Fro-Yo and a pastry chef by trade, says: "It's definitely been a learning experience and will continue to be one for sure, but I'm excited to take on that responsibility."

Of the two cases of cups ready for filling, at least 350 fro-yo fans snacked at Fondren Froyo on its opening day.

The self-serve topping bar offers assorted treats such as coconut shavings, Nerds candy, M&Ms, marshmallows, kiwi pieces, strawberry, several syrups, among many others. "We would eventually like to do more gourmet toppings and smoothies with the different yogurts," Mullins says.

This winter, Fondren Fro-Yo (2951 Old Canton Road is open Monday through Saturday from 11 a.m. to 8 p.m.; however, once the time changes on March 13, the business will be open until 9 p.m., and possibly on Sundays from 11 a.m. to 9 p.m. For updates, photos, and directions, find Fondren Fro-Yo on Facebook and Instagram or visit fondrenfroyo.com.