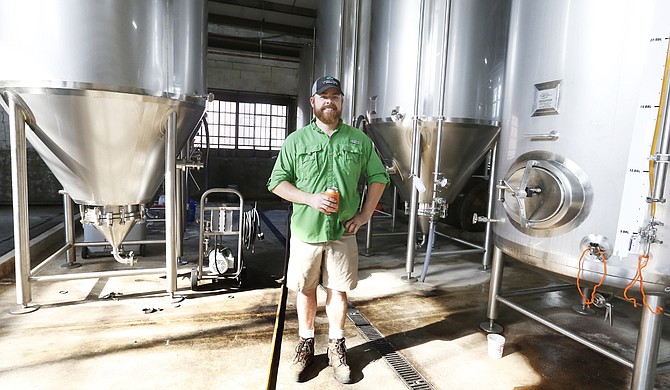 In a warehouse on Mill Street in midtown sits Lucky Town Brewing Company, Jackson's only brewery. Brewmaster Lucas Simmons, who co-owns the business with partners Chip Jones, Angela Ray and Brandon Blacklidge, recently gave the Jackson Free Press a tour of the brewery.

1—While many breweries have their grains come in tall silos, Lucky Town's grains come in 50-pound sacks. The grain mill cracks open the grain and breaks off of the inner cusp of the grain. The motor on top of the pipe spins and drags the grain up to the grist case, which stores the grain when it's transferred from the mill. The holding time can be anywhere from a few minutes to overnight.

2—The mash tun (the round device above) mixes the raw mill grain with hot water. The temperature depends on what you want to get out of the beer. The standard mash temperature is between 145 and 160 degrees Fahrenheit. Simmons says raising the temperature yields a beer with a thicker mouthfeel (the sensation that comes from the consistency or viscosity of the beer), and lowering the temperature results in a dry, easy-to-drink kind of beer.

3—The boil kettle, which is equipped with steam jackets on the inside, gets the water boiling hot. When that happens, Simmons throws in the hops. The time the hops sit in the boiling water changes the outcome of the beer. The longer the hops sit in hot water, the more the flavor of the beer changes, so it needs to be cooled down as soon as possible. 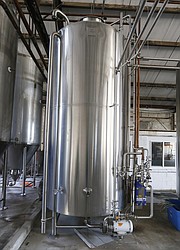 4—Once the hops finishes boiling, the unfermented beer goes through a pipe to the heat exchanger, and the cold liquor tank cools the beer down. 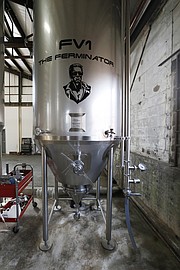 5—The beer then goes into a fermentation vessel where Simmons adds pure oxygen to ferment the yeast. It takes 15 to 20 days to ferment a beer. While many breweries may use a filter, which removes impurities, Lucky Town chooses to forgo the filter so that the process doesn't strip away any of the flavor.

6—Lucky Town cans up to 26 beers per minute. On most days, Simmons is the only one brewing the beer. When he cans the product, he has part-time workers help him, along with Blacklidge, who assists Simmons every Friday. Lucky Town can't afford to have a big crew because state law prohibits the company from selling anything on site, though Simmons says the Mississippi Brewers Guild is currently fighting that law.

"It's all about judging your time wisely," Simmons says of the brewing process. "Basically, I can control any system in here from my phone."

He also plans to add more tanks to the brewery that can help speed up the brewing process. Simmons also hopes for more brewing companies to come to Jackson to help the craft-beer industry in the city.