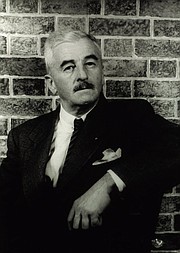 OXFORD, Miss. (AP) — Late one night at the University of Mississippi power plant, William Faulkner turned over a wheelbarrow, used it as a makeshift table and began writing the classic novel "As I Lay Dying" — but where in the building did he do it?

Was it where facility managers answered building maintenance calls until 2013? In one of the rooms used as a biology lab? Or maybe in the basement where the steam tunnels branch off?

No one knows, and there won't be much more time to tread the floors of the Old Power Plant and speculate. Ole Miss plans to demolish the now-vacant 1908 building in coming months, as it builds a mammoth $135 million science building just north of Vaught-Hemingway Stadium.

University Architect Ian Banner said Ole Miss officials considered saving the building, which isn't actually in the footprint of the new science building, but decided against it. Instead, Banner said the university will build a commemorative space.

"This option, I think, is going to be phenomenal," he said.

But with the building gone, one more physical link to a time when Faulkner was just making his reputation will be severed.

"The power plant really is the only remaining space on campus where Faulkner created significant work, and 'As I Lay Dying' was really one of his most significant works," said Jay Watson, a professor of Faulkner studies in the Ole Miss English department.

Faulkner, newly married with two stepchildren, needed money when he took the job as the plant's overnight supervisor in late 1929, working 6 p.m. to 6 a.m. The coal-fired plant supplied electricity to the university and town of Oxford, both much smaller then. After people went to bed, there wasn't demand for power until dawn.

So Faulkner would roll up a sheaf of papers in a rubber band when he left his family's rented quarters, unroll them in the middle of the night and write.

"I had invented a table out of a wheelbarrow in the coal bunker, just beyond a wall from where a dynamo ran," Faulkner later said. "It made a deep, constant humming noise. There was no more work to do until about 4 a.m., when we would have to clean the fires and get up steam again."

Faulkner dated the first page of the manuscript on Oct. 29. The 107th and final page was dated Dec. 11. The book became a landmark of 20th century literature, chronicling the ill-fated nine-day trip of the Bundren family across Yoknapatawpha County to bury matriarch Addie in her family plot in Jefferson, Faulkner's fictional counterpart of Oxford. Telling the story in stream-of-consciousness monologues by 15 narrators, Faulkner intended the novel to solidify his reputation as a writer.

"I set out deliberately to write a tour-de-force," Faulkner wrote later. "Before I ever put pen to paper and set down the first words, I knew what the last word would be. ... Before I began I said I am going to write a book by which, at a pinch, I can stand or fall if I never touch ink again."

Those who oversee Mississippi's historic structures cleared Ole Miss to pull down the power plant in 2010 and again in 2014.

"We determined in looking at the structure that it had been altered so heavily that it had lost integrity," said Jim Woodrick, director of the Historic Preservation Division at the Mississippi Department of Archives and History. "The building has just been really badly handled through the years."

Many doors and windows have been replaced, he said. A modern metal roof now sits over the former boiler room. The smokestack was demolished.

"I don't know if (Faulkner) would recognize it if he walked in it," Woodrick said.

The university backed away from a 2010 plan to knock down the building, but the structure appears unlikely to get a reprieve this time.

"I really have been doing my best for the last couple of years to get the university to preserve that building, but they've decided to go in a different direction," Watson said.

The power plant job was the last non-writing work that Faulkner would ever do. Three months after mailing a typed version of "As I Lay Dying" to his publisher on Jan. 12, 1930, the author bought an antebellum home on what was then the outskirts of Oxford. Today, Ole Miss owns and hosts visitors at that much better-known Faulkner site, which he named Rowan Oak.

The power plant will live on though, in Faulkner's work. In his 1932 story, "Centaur in Brass," recurring character Flem Snopes works as power plant superintendent and tries to get two firemen to steal brass parts for him to sell.