The Push to Double the Minimum Wage 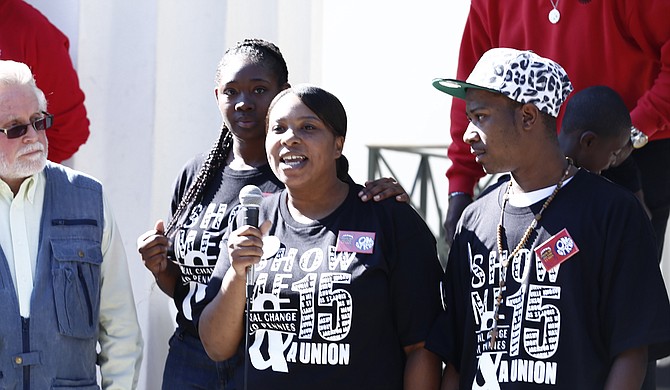 Cajania "CoCo" Brown, 24, says that she, her colleagues at Popeye's Lousiana Kitchen, and all other minimum-wage workers are worth more than what their bosses and the State of Mississippi say they deserve to be paid.

"They tell us that if we want more money, we need to get better jobs and education, but none of us wants to do this for the rest of our life," the Jackson resident and mother of two said.

Brown started taking business courses in 2012 at Strayer University, a for-profit institution specializing in degrees for working adults with a campus off Briarwood Drive. She wants to go back and become a "black business leader," but she says "it's a struggle just to survive on $7.25 an hour." She points to the costs of her energy bills, rent and groceries as some of the factors that led her to postpone college.

"Can't survive on $7.25!" was one of the slogans a group of about 20 local activists, organizers and low-wage workers chanted Tuesday, Nov. 10, at the McDonald's restaurant on Woodrow Wilson and Bailey Ave.

From there, protesters visited and marched at several fast-food chains on U.S. Highway 80, including McDonald's, Dairy Queen and Popeye's. Ten fast-food workers were on strike that day, while several more joined the rally after their shift.

Inside the Popeye's on Highway 80 and at the McDonald's on Bailey Avenue, protesters presented a statement to managers calling for $15-per-hour pay and union rights for all workers.

The strike ended with a rally on the steps of Jackson City Hall at noon, with union organizers and workers from the Nissan plant in Canton, the Mississippi Immigrants Rights Association, the Mississippi Alliance of State Employees and state Rep.-elect Kathy Sykes, D-Jackson, bringing the crowd to around 50 people.

"These young people weren't around for the civil rights and labor movements of the past," Jaribu Hill, who founded the Mississippi Worker's Center for Human Rights in Greenville in 1996, told the Jackson Free Press. "So it's critical for today's struggles for justice that they become engaged and their voices and experiences highlighted."  The local day of action was part of a nationally coordinated effort known as "Fight for $15," which kicked off in late November 2012, with several hundred fast-food workers in New York City walking off the job to demand $15 an hour and the right to unionize.

Darcy Burgess, 47, who moved from New York City to Jackson in September, works with Fight for $15 and was one of the principal organizers of Tuesday's action, recruiting fast-food workers and connecting them with local allies.

Jackson was one of 270 cities across the U.S. that saw workers from various low-wage industries participating in the day-long strike.

Burgess said she plans to stay in Jackson until workers get $15 an hour and union rights, stressing that getting workers unionized would address the imbalance of power between owners, managers and low-wage workers, who have less job security than higher earners.

Mississippi is currently one of 25 states with "right-to-work" laws, which prohibit unions from developing "security agreements" with employers that would require their employees to join a union or pay union dues.

Burgess said even though right-to-work laws hinder the ability of Mississippi workers to achieve real bargaining power, the goal of full union rights will remain an integral part of the struggle to get and keep a living wage.

Despite massive gains in worker productivity and technological capacity, overall wages for American workers have remained stagnant since the late 1970s, the Economic Policy Institute reports. In contrast, average income for the top 1 percent of earners has increased more than 240 percent since 1979.

While the Fight for $15 movement promotes higher wages so that service jobs offer more livable wages to workers, some opponents of mandated raises say minimum-wage jobs are simply an entry-point into the workforce, a necessarily low bar from which one can climb the economic ladder.

"If these jobs were meant to be your career," Sen. Joey Fillingane, R-Sumrall, told the Jackson Free Press, "then not raising the minimum wage would be a really bad idea. These jobs are just meant to get you climbing the ladder from point A to point B."

Mississippi's current minimum wage remains at the federally mandated $7.25 per hour, which leaves a full-time worker earning $15,000 a year before taxes, just above the federal poverty line for a household of two.

Ron Aldridge, state director for the National Federation of Independent Businesses, says that the NFIB regularly conducts nationwide surveys of small businesses showing that around 80 percent of their members oppose a minimum-wage increase. Aldridge said he was confident that the numbers for Mississippi small businesses would closely parallel, if not exceed, that national percentage.  Aldridge said the issue boils down to how businesses with low-profit margins can stay afloat. "A raise to $15 more than doubles current labor-costs, and so you're left with a choice between passing that increase on to the customer or cutting into your own profits," he said.

When asked whether larger fast-food chains such as McDonald's were in a better position to wage raises, Aldridge said that the situation was really not all that different for successful corporations.

"That's really the wrong way to approach the issue," Aldridge said, "because individual franchises are owned and run by local business leaders who have taken great risk and made personal investments, and their profit margins are still razor thin."

Both Aldridge and Fillingane point to Mississippi's investment in workforce training programs as a better solution than raising the minimum wage.   "We've been spending somewhere between $20 (million) and $40 million a year in workforce training so that people on that lower-rung of the economic ladder can get trained to get a job at a Toyota, or Nissan or at a number of other industries that have come to our state," Fillingane told the Jackson Free Press.

"Those are tax dollars, and you could say that's certainly part of the social welfare net we've put in place in our state, that allow people to go from making $7.25 at a local restaurant to taking some courses for six months and going to work at one of these factories, making $12 to $15 an hour."

While many economic studies have concluded that incremental increases in minimum wages have little effects on employment, some conservative economists, such as Jonathan Meer of Texas A&M, argue that the traditional literature mistakenly relies on short-term analysis of effects that build up over time.

In a debate with economist James K. Galbraith of the University of Texas at Austin in September of this year, Meer maintained that higher wages inevitably lead to stagnant or decreasing employment. Galbraith, a renowned moderate, argued that economists like Meer base their certainty about negative employment effects in theory rather than fact, while dismissing one of the most salient effects of higher wages: higher income for workers directly translates to higher purchasing power in a local economy.

“What businesses lose in increased labor costs they gain back as workers walk back through the door with more money in their pocket,” Galbraith said.

Moderates like Galbraith, who supports the general demands of Fight for $15, agree that businesses would face more difficult short-term decisions if the federal level were immediately doubled. In his debate with Meer, Galbraith suggested immediately raising the federal wage to about $10.50 and phasing in a raise to $15 by 2020.

“Businesses have to adjust all the time for increased costs and fluctuating markets,” Galbraith said, “and I am a moderate, which means I believe that important social reforms should be introduced gradually.”

In states with higher costs of living and higher minimum wages than Mississippi, some cities, like Seattle and Los Angeles, have already passed ordinances to raise the minimum to $15 over the next few years.

While an immediate raise to $15-per-hour might deliver a shock to the system in Mississippi, where poverty is rampant and wages for most workers are low, Fight for $15 advocates say that high concentrations of wealth inequality are the real stumbling block to political progress.

"Mississippi might only move to $10 or $12 for now," Jaribu Hill said, "but first we've got to know what's right and demand our full rights."