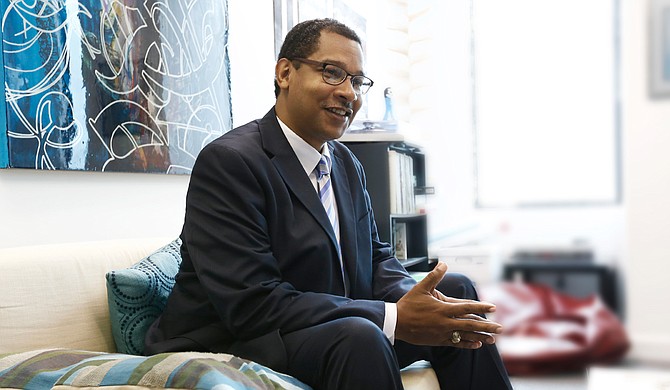 Cedric Morgan considers himself a techie with a customer-service touch—just the combination of skills needed to be the Hinds County circuit clerk. Photo by Imani Khayyam.

Cedric Morgan grew up near the Pilgrim Rest community, in rural Leake County, in a family of farmers. So naturally, when he won an academic scholarship to Jackson State University in 1983, he decided to study computer science. Since finishing his computer-science degree in 1987, Morgan, 51, has worked in information technology for a number of state agencies, including the Office of the Mississippi Secretary of State, which oversees elections. There, he worked closely with the state's circuit clerks, who are in charge of voter registration, to maintain voter rolls. In other words, to make sure there were no dead people voting (it was common back then, he says, but rare these days). Now, Morgan wants to bring his tech savvy and management skills and become the next Hinds County circuit clerk.

If elected, Morgan said he wants to streamline the county's e-filing system for civil lawsuits and revive an unenforced state law that requires clerks to personally visit high schools in their district and register high-school seniors. Morgan and his wife, Karen, have one daughter named Jessica and live in Clinton.

What would your Day 1 priorities be?

My consistent message is that I want to go in and do an assessment ... a SWOT analysis, essentially: the strengths, the weaknesses, the opportunities—that's where your solutions come in—and, of course, look at any threats.

How do you think the technology upgrades are going at the circuit clerk's office?

Since I've been campaigning for this office, I've been speaking with stakeholders-attorneys who work on a day-to-day basis with the circuit clerk's office, and many of them are not happy with the system. What I want to do when I'm elected to the office of the circuit clerk is to do an assessment to see if it's the application itself. As you know, when (new) versions of software come out, there are always revisions and, of course, it's important that you get input (from users). And I know that the Administrative Office of Courts is receptive to that—that's just good, solid project management.

What specifically are people unhappy about?

Specifically, some feel that it's not user-friendly. It's not very intuitive like a lot of applications that we're used to working with, on the Apples, the Macs, etc. I can recall that I recently had my nieces visiting ... and it's just amazing how they're able to accomplish (with computers) what they're trying to do, just because it's intuitive . ...

One of the challenges that they are also facing is when the current circuit clerk (Barbara Dunn, who is not running again) was fined by the (Mississippi) Supreme Court. In the judicial system, when one of the parties in a civil suit files information regarding that case, all the other attorneys involved in that case should be notified. And there have been some instances (under Dunn's clerkship) where some of the other parties weren't notified. Of course, the clock is ticking, and that can be detrimental to justice. And from my limited information, it just appeared to be a technical issue.

If Hinds County has a system with all the bells and whistles, wouldn't it cause problems in talking to other systems with fewer bells?

The technology is there now where that is not a major issue. There are interfaces that can be built for a variety of platforms. For example, Apples talk to Microsoft products. So it's not an issue as it was in the past. The key is project management. Project management involves making sure you have a time frame for the product—and I'm oversimplifying here—knowing what resources are needed, and you have contingencies. It's important for project management, but it's also important for vendor management as well. It's important that you have a background and knowledge to save the county some money in many cases. Most vendors are about selling you goods, whether you need them or not. You have to have solid background for what's needed for a project and make sure you're very efficient with taxpayers' dollars.

The problems you mentioned—is that because Hinds County didn't buy the right equipment, or is it a project management issue in your view?

It really comes down in my mind to good solid project management. ... There's a testing phase to implementation and, during the testing phase, there's an opportunity for end-user feedback to the developer. And that developer takes that into account and does some tweaking to address those issues.

Does there need to be a dedicated project manager in the clerk's office?

There definitely needs to be project manager, and I think it's more important when the circuit clerk has the leadership role for that project.

Of course, the circuit clerk cannot do everything by themselves. It's a team effort, but you have to gave the staff with the skill sets. You don't have to be an official project manager, but you have to have that skill set.

Would you be looking to bring someone in?

Not necessarily. I believe in training, and we have all kinds of universities and colleges in the area. Training is available to provide project management training that's needed—sometimes just three or four days will help you successfully manage some projects. Even in existing employees. If you provide them the proper training and tools, then they always rise to your expectations in most cases.

You've obviously done the IT thing, but customer service is another big part of the job.

We talked a lot on the technical side. That was just over half of my career. The other half has been (in) management and supervision. Even in the technical realm, you still have to be customer-service oriented because really, in IT, we are just a business that is providing a service. Also, in the (Jackson) city clerk's position I held ...

When were you City clerk?

That was Harvey Johnson's second term, and I worked through Frank Melton's term as well. That's about customer service. That was the interface for citizens of Jackson to have access to city government, to have access to city council. We provided administrative support to the seven council members, we provided support to the mayor's office and the other city departments. As far as customer service, I've been well trained in it. Throughout my service in state government, I was afforded the opportunity to through the state personnel board. I also completed the Stennis Institute of Government at Mississippi State. I think I have a very rare combination of experience that you (won't) find in most political candidates in having the technical background and the government management background as well.

What needs to happen to change the thinking of agencies about access to public records?

Government has been streamlined because of budgetary issues. However, that does not excuse being not able to respond to a public-records request. I believe in the sunshine law. I believe government should be open and transparent. ... I think it does come from the top, and it means having a leader in place with that mindset, understanding that we want the citizens to be informed. We don't want to release any confidential information. However, with public information we have to make our best effort to produce that timely.

Access is such an ambiguous term. There's some space between $1 per page for copies and, understanding budget constraints, not charging anything. But where do you find a fair midpoint?

My commitment is to be open and fair. I want to make sure that we assess what it costs to produce a document. It's probably not $1, maybe it's less. But (I will do) an actual assessment to see what the costs are where the intent is not deter to someone from being able to obtain some public information. It's fair to the taxpayer also that the cost is covered, but not above what it costs to produce it.