Ain’t Nothing But the Birthplace of the Blues | Jackson Free Press | Jackson, MS

Ain’t Nothing But the Birthplace of the Blues 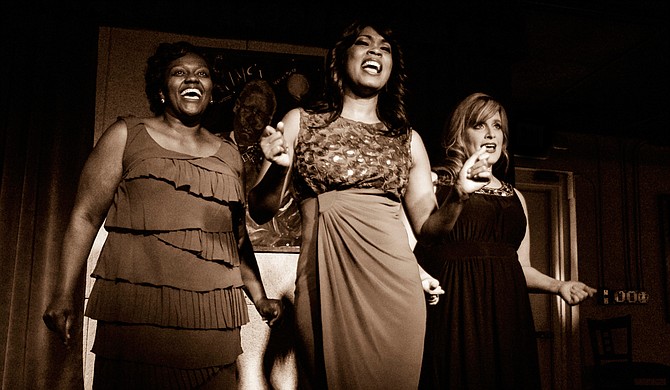 Sharon Miles, Kimberly Morgan Myles and Mandy Kate Myers star in New Stage Theatre’s production of “It Ain’t Nothin’ But the Blues,” which runs from May 26 to June 7. Photo courtesy New Stage Theatre

The South is the birthplace of the blues, and Public Broadcasting Station's "Blues Road Trip" describes the Mississippi Delta as the genre's emotional heart. So, inherently, a certain amount of pressure goes along with producing a musical revue about the blues in the Magnolia State. New Stage Theatre is gearing up to tackle that tough number this month.

"It Ain't Nothin' But the Blues" is a melding of music that culminates in what we now identify as the blues. Peppy Biddy, director of New Stage's revue, describes the show as "part concert, (part) chronological telling of the history of the blues."

The revue begins with African chants, which are the essential roots of blues music, and moves musically through the Mississippi Delta, ending up in Chicago. Because the blues evolution also influenced country music, that link plays out on stage, too.

"The fact that ("It Ain't Nothin' But the Blues") has a lot of ties to Mississippi gives us an obligation to work even harder on it," Biddy says. "... You can't get away with anything inauthentic."

That, coupled with the fact that the revue made it to Broadway in 1999 and earned four Tony Award nominations, including Best Musical, pushes the stakes even higher.

"Yeah, well, there's always that," Biddy says with a laugh.

Actor, singer and songwriter Ron Taylor's original idea for the revue was to perform songs showing the evolution of the genre, and Taylor, along with director Randal Myler, artist, actor, singer and composer "Mississippi" Charles Bevel, singer/songwriter and actress Lita Gaithers, and actor Danny Wheetman wrote the script. The Denver Center Theatre Company originally produced the revue; then the Crossroads Theatre Company, with the San Diego Repertory and Alabama Shakespeare Festival, presented it for the first time in New York at the New Victory Theater. Crossroads, the San Diego Repertory and Alabama Shakespeare Festival, in association with the Lincoln Center Theater, produced the play at the Vivian Beaumont. In its Broadway iteration, seven performers cover around 35 songs within two hours, all to the accompaniment of a six-piece band.

Of the original show's writers, Taylor, Bevel and Wheetman were also part of the Broadway show, along with actors Gretha Boston and Carter Calvert, singer Eloise Laws, and jazz singer, songwriter and actor Gregory Porter.

As a jukebox musical revue, "It Ain't Nothin' But the Blues" is not plot driven. Most of the dialogue serves to inform the audience where the music has been and where it's going. For New Stage, it means that the production relies heavily on the vocal chops of its seven performers to successfully deliver more than 35 songs over two acts. And it has no character roles as you might expect in a traditional book musical. Instead, the performers go by their own names.

Musical director Sheilah Walker-—the musical director for "Ain't Misbehaven" at New Stage 11 years ago who also has Broadway and London theater credits—and the cast put a lot of stock in thorough preparation. Miles, who sings "Someone Else Is Steppin' In" and "I Put a Spell On You," among other tunes, puts it this way: "The more you practice it, as opposed to shying away from it, the more you can stretch the vocal cords, and it really does help. So by the time the show opens, you will have worked that muscle enough so that you're mentally not getting in the way (and) that you can actually hit that note comfortably."

Among other songs the audience will hear are Patsy Cline's "Walkin' After Midnight," Peggy Lee's "Fever," and a Roy Hawkins tune that B.B. King made famous: "The Thrill is Gone." The revue also includes the Don Gibson song "I Can't Stop Loving You," which was a hit for Ray Charles, Billie Holiday's " Strange Fruit," Muddy Waters' "I'm Your Hoochie Coochie Man" and Robert Johnson's "Come On In My Kitchen."