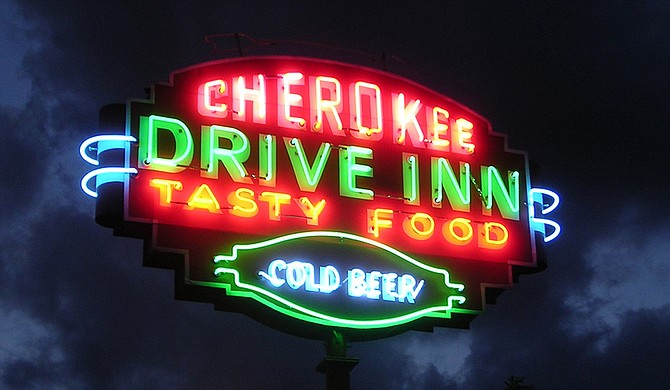 The Cherokee Drive Inn (1410 Old Square Road), long-time Best of Jackson winner for Best Dive Bar and Best Hangover Food, has closed down. The famed establishment has changed locations and owners often enough that no one is certain where and when it was founded or by whom. Some say it was around since the 1920s, but the oldest known owner is Monroe Mason, who took over in 1944. The eatery went through at least five different owners and three or four location changes before coming to what is now its final resting place in 2003.

For some, the Cherokee was all about food. The beloved Jackson eatery was famed for its Thursday roast beef plate lunch, the Barnyard Burger, fried chicken sandwiches, fried green tomatoes and the cult-classic appetizer, comeback dressing served on saltine crackers. It was no organic gastro pub, but with a no-nonsense approach to food, the Cherokee kept the bellies of Jackson full and warm.

Others might remember the Cherokee as a venue. Hanging lights illuminated scuffed and often altogether missing linoleum tiles that gave a sense of history to ponder between games of pool. When there wasn't a country track being played, regulars could look forward to acts like The D'lo Trio picking away on a Thursday night.

A quick look on the restaurant's Facebook page makes it clear that people are struggling to understand the loss of the former Jackson fixture: "Have y'all closed?" "Are you guys closed for good or is this some sort of terrible hoax?" "What's this I hear about The Cherokee closing???"

What is this, indeed.

Even if you went to the Cherokee frequently, passing it on Interstate 55 likely didn't evoke much of an emotional response before the loss off the beloved locale. The Cherokee was a staple. It had been around in some form or another since long before most people can remember. Whatever becomes of the property, it will be a reminder of the neon signs, odd arcade games, greasy fries and warm sounds that once housed many great nights for Jacksonians.

The zoo recognized the need for new directional signs eight years ago as numerous people were calling for directions, and the older signs had faded and were no longer useful.

During conversations with the support group Zoo Area Progressive Partnership about adding banners along Capitol Street, the need for directional signage again came up as a higher need. ZAPP President Marcia Reed and zoo staff contacted the City and began working with staff there on getting a design approved and funding for printing and installation.

The Jackson Zoo went through a rebranding look in 2013 with the help of Mad Genius and agreed that the new brand would also work well for the signs. The City of Jackson funded the project in 2013, and the zoo completed the printing earlier this year. Installation began May 20.

The Mississippi Emergency Management Agency has developed a virtual business emergency operations center where businesses can find vital information and work together before and after an emergency during hurricane season. Businesses can register for the program at https://fs22.formsite.com/er-itn/mema/secure_index.html.

MEMA recommends that business owners develop a recovery plan for their businesses by taking the following precautions:

• Consider a telephone calling tree or a voice recording to communicate with employees during an emergency.

• Designate an out-of-town number where employees can leave an "I'm OK" message during a catastrophic disaster.

• If you have employees with disabilities or special needs, talk with them about what their needs may be during a disaster.

• Review and practice what you and your employees intend to do during and after an emergency.

• Make plans for assisting employees who may need transportation.

• Make plans for communicating with employees' families before and after a hurricane.

• Purchase a NOAA Weather Radio with a warning alarm tone and battery backup.

• Survey your facility. Make plans to protect outside equipment and structures.

• Consider the need for backup systems, such as portable pumps to remove floodwater and generators to provide emergency power.

• Prepare to move records, computers and other items within your facility or to another location.

• Consider how to recover any digital data if there is a significant power outage or if computers and servers are damaged. Keep tax and payroll records, records of inventory and essential information at an alternate site.

• Maintain three to five days of inventory. If a disaster occurs, the loss isn't as great.

Gov. Phil Bryant declared May 25-29 Hurricane Preparedness Week in Mississippi, and urges families and businesses to consider their emergency plans in the event of a hurricane.