Spirit Through a Camera Lens 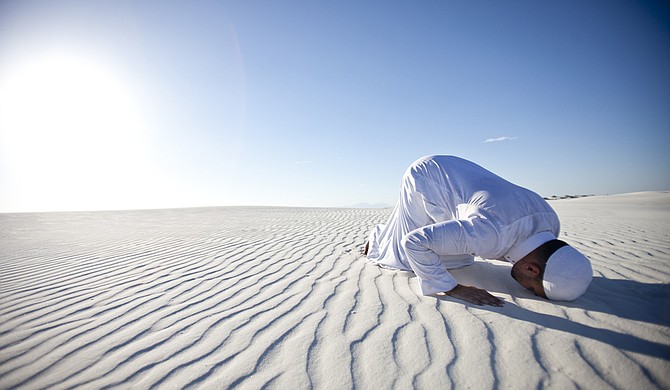 “Capture the Spirit of Ramadan” runs from May 28 through July 31 at the International Museum of Muslim Culture, located at the Arts Center of Mississippi. Photo courtesy Lisa Vogl-hamid, New Mexico, International Ramadan Photography Competition

In sweeping hills of reddish-brown earth, a man in a white robe kneels on his prayer rug, hands raised toward the sun. The photograph is peaceful, the stillness captured through the lens of the camera. In another shot, a young boy leaps across a puddle in a courtyard, the top of a building reflected in the water. His uncovered feet seem to fly, gliding along the tiny colored steeples.

These photographs and many others are among the winners in previous years' "Capture the Spirit of Ramadan" exhibitions. Dr. Basel Almisshal, an architect and member of the United Nations' Photographic Council, founded the International Ramadan Photography Competition in 2011. The exhibit began as an online contest to capture and show the world positive images of the beauty of the Islamic faith during the months of Ramadan. The IRPC selects the top photos out of thousands in the categories of spirituality, architecture and culture.

The International Museum of Muslim Cultures, located in the Arts Center of Mississippi, will host this year's exhibition which, for the first time, will be on American soil. The "Capture the Spirit of Ramadan" exhibition debuted in 2014 at the Islamic Arts Museum in Kuala Lumpur, Malaysia, and again at the Festival of Eid (which marks the end of Ramadan), which was in London's Trafalgar Square.

IMMC Assistant Director Muhammud Abdur-Rahman, also the museum's imam-in-residence (an imam is an Islamic leader), explained that the exhibit will share with the Jackson community what Muslims do during the month of Ramadan and what it means to them.

Maryam Rashid, the education coordinator at the museum and Abdur-Rahman's wife, says that historically, some of the first people to come to Mississippi were Muslim.

"Some of the enslaved Africans that came to the Americas and worked here, they were Muslim," she says. "So it's a way of kind of bringing that awareness of where Islam is—how it connects to America and Mississippi, in particular."

Rashid adds that the exhibit is also an opportunity for people to see the Islamic presence in their community.

"It's an opportunity for the citizens in Jackson, Mississippi, to celebrate with us," she says. "We enjoy the spirit of Christmas, which we know is a Christian holiday, but we enjoy that spirit of giving and celebration. We just want to share that with others here in Jackson and to let them know we have an active Muslim community."

The first year of the contest, more than 25,000 photographers from 40 different countries submitted their works to the competition. This year's exhibit includes 3,500 photographs of Ramadan in 2014 from 60 countries and runs at IMMC from May 28 to July 31. The dates roughly coincide with Ramadan this year, which begins on or about June 18 and ends around July 17. The dates can vary slightly in different parts of the world, in accordance with the Islamic lunar calendar.

Ramadan, which translates to "scorching heat," occurs during the hottest part of the year, Abdur-Rahman says. The heat symbolizes the burning away of sins and becoming a renewed person. Much like Christian Lent, the month provides a time for Muslims to focus on patience, humility and abstaining from sin. The New Moon begins a month of fasting from dawn to sundown to commemorate the time when the prophet Muhammad received the last messages from God and set them down in the Quran, the Muslim holy book. After sundown, Muslims celebrate the revelation with family, friends and food.

Photographer, filmmaker and writer Mustafa Davis, whose work is an eclectic mixture of Muslim and international culture, will lead photography workshops during the event. In addition, Lina Ali, exhibit curator and IMMC board member, will discuss the origins of "Capture the Spirit of Ramadan." Check the museum website for the dates and times.

See "Capture the Spirit of Ramadan" from May 28 through July 31 at the International Museum of Muslim Cultures at the Arts Center of Mississippi (201 E. Pascagoula St., 601-960-0440). The museum has a package deal for "Capture the Spirit" and other exhibits: $13 for adults and $12 for children and seniors. For more information, call 601-960-0440. The museum is open Tuesday-Friday 10 a.m. to 5 p.m. It is closed Monday and open by appointment only Saturday and Sunday. On Fridays, the museum is closed 1 to 3 p.m. in observance of Jumah prayers.