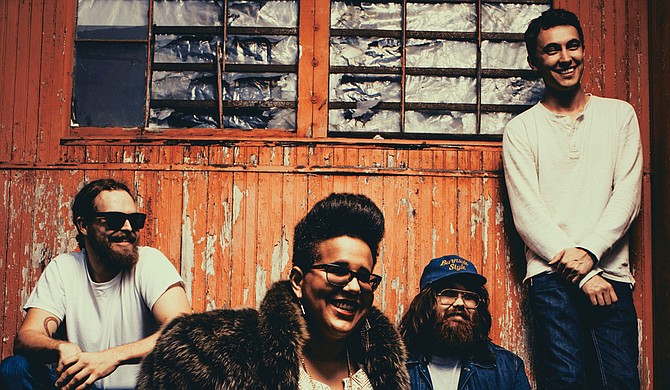 When I first listened to Alabama Shakes, I didn't like them. It was hard to tell if the person singing was a man or woman because of lead singer Brittany Howard's lower octaves. Her voice sounds like a cross between Jimi Hendrix and Marvin Gaye, with feminine overtones. At first, the music seemed lackluster. While I don't necessarily like heavy tunes, I like it when music is loud.

But Alabama Shakes grew on me after a few more listens to the band's first album, "Boys & Girls." The music began to sound like a soulful version of Kings of Leon, with bluesy guitar riffs and, many times, keyboards driving the sound. It reminded me of summertime—the kind of music I want to listen to on long road trips with my windows down. For the band's newest album, "Sound & Color," which hit stores April 21, the band departed from that familiar sunny sound in favor of a darker one. Alabama Shakes kept most of its rock 'n' roll roots intact but layered on heavier sounds—and more than a little weirdness, such as the hollow sound of Mason jars clinking.

Listen to the opening songs on the two albums back to back—"Hold On" from "Boys & Girls" and the title track from "Sound & Color"—and you'll hear a vast difference between the band's freshman and sophomore albums. "Hold On" opens with a slow, simple drumbeat, and then Howard's guitar kicks in with a sound akin to Chuck Berry. It prepares you for the rest of the album: fun, bluesy, edgy vocals from Howard and songs reminiscent of the early days of rock 'n' roll.

"Sound & Color" begins on a slower, soulful note. The trembling tone of an organ replaces the straightforward keys, and in the background, you can hear strings. In "Hold On," Howard sings about future possibilities and her impatience to get to a destination. "Sound and Color" seems to be a follow-up to that song. In it, she sings about exploring a new world in all of its beauty and darkness: "Sound and color. This life ain't like a book."

The title track rolls into "Don't Wanna Fight," which sounds like a hard-rock version of Gnarls Barkley's "Crazy." Its bass line thunders while Howard repeats, "I don't wanna fight no more." The song is the lyrical opposite to "Sound and Color." Here, Howard is trying to fix a relationship, and she laments about how hard life can be. I understand her in this song because sometimes I, too, have problems with being an adult and dealing with grownup stresses.

I think my favorite track on "Sound & Color" is "Future People." I connect more with this song than others because it centers on self-discovery. "Some want to see those who've gone above, friends they've lost, people they love. I'd rather meet freedom than roam, to lead me through the fog," Howard sings, though it's ridiculously hard to understand the lyrics with her high-pitched delivery. The bassy, throbbing synthesizer throughout the chorus electrifies the song.

For many, the last track is also the last chance to wow the listener, whether it's upbeat or gets down to the heart of what the album is trying to convey. "Over My Head" does the latter. It is the most soulful song on "Sound & Color," with its echoing organs and swinging vocals and drums.

Like "Boys & Girls," it took a few times listening to "Sound & Color" for me to like it, but it's now one of my favorites. The record shows how much Howard and the rest of the band have progressed since their debut album. "Sound & Color" is a fresh take on old-style rock 'n' roll, and though I'm not a huge fan of soul, Alabama Shakes' rock-soul fusion definitely works for me.