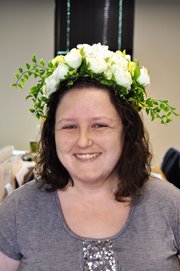 When I was younger, one of my guy friends would always complain that I have terrible taste in music. I listened to bands such as Goo Goo Dolls, Nirvana and a maybe few pop songs here and there—all vestiges from my childhood.

He even made me a CD mix titled "For Amber's 'Taste'" that had songs from bands he liked at the time, such as Coheed and Cambria and The Mars Volta.

Every time he made fun of my music taste, I vehemently defended it, because to me, everyone likes what they like. That's not to say that you can't introduce someone to other stuff, but it's just not nice to tell someone that their music taste is terrible—even if it's probably true.

But I will say that thanks to him—and a bet with myself to fill a 120 GB iPod with 30,000 songs—I have much more diverse music tastes now. If you look at my Spotify history on a daily basis, you'll probably notice that some weeks I may listen to the same thing each day, and some days, I listen to a diverse array of artists from Doug E. Fresh to Echosmith.

My friend's contagious love for music rubbed off on me, and I thank him every day for that. But more often than that, I tend to listen to a specific type of band (and this doesn't necessarily apply to a specific genre)—ones either fronted by or that contain women.

It's not a conscious mode of solidarity. I just happen to like the diversity, and I think when people do duets, something magical happens. Now, don't sit here and think that means I listen to nothing but Lady Antebellum or The Civil Wars. I'm actually drawn more toward music such as English band The Duke Spirit (fronted by Liela Moss, a style inspiration for me) and Paramore, fronted by Haley Williams, who is actually from Meridian. Moss and Williams are both dynamic lead singers, but I always find that their bands lack a certain element.

You see, ever since I began listening to The Donnas as a 14-year-old, I grew fascinated with women in rock 'n' roll. And though bands like Paramore wouldn't survive without women like Williams, I always wondered why it is that you rarely ever find women who play the role of lead guitarist.

I'm sure you can probably name a few, from Joan Jett to Lita Ford to Nancy Wilson to, more recently, Carrie Brownstein of Sleater-Kinney. But compared to men who play lead guitar, women are few and far between.

Now, there are hard-rocking bands that consist of nothing but women, and that's cool and all, but I think men and women together create this incredible dynamic. You get a pretty voice, good guitar riffs and occasionally some heavy, catchy bass lines (my personal favorite). But most of the time, that's what I think the music industry sees women as—pretty faces only meant to sing while the men are over there getting all the guitar solos.

One of my other favorite bands, Damone, had a woman lead singer, Noelle LeBlanc, who sang but also played guitar. Except that she only played in rhythm with the other guitarist, Mike Woods. You rarely got to hear her perform solo.

But good news is on the horizon. With the changing dynamic of the conversations on gender equality, I think the world is beginning to want more women like Browstein or Jett. And that's where I think the success of bands like the Alabama Shakes comes in.

The lead singer and guitarist of the band, Brittany Howard, is a great example of a woman making strides in music. And the funny thing about her is that she has a few different elements that set her apart from other women in rock 'n' roll. For one thing, she is a woman of color (mom is white, dad is black) who fronts a roots-rock band. And, on top of that, she's a plus-sized woman. Just by being in the music genre she's in and doing what she does, she's making strides without even trying. She's making a difference with her eyes closed.

If you've ever seen her perform live or watched YouTube videos, you can see that she's not kidding around about her talent. That's not even to discredit her voice. I love it because it's like a combination of Billie Holiday and Janis Joplin.

In an interview with bet.com, when the writer Clay Cane asked her if it ever feels odd being one of the only women of color who front a rock band, she said: "I don't think it's odd. I think it's cool people like it. Because, shoot, people used to do it all the time. This is where rock 'n' roll came from: Chuck Berry, Memphis Minnie—it used to happen all the time. It's still happening. All along, there's all these talented people, women, men, black, white—we just got lucky."

I've heard many people say they just don't enjoy Alabama Shakes, which is cool because that type of music isn't everyone's thing. But at the very least, they respect Howard's accomplishments.

It's even harder to find female drummers and bass players, I guess because those instruments seem to play such a background role (though both are the backbones of most songs). If I had the time to learn and money for a drum kit, I'd play drums in a band in a heartbeat. And since I like to hit things, I think I'd be quite good at it. I'm sure many other women share that same sentiment, but it's a rare occasion when you find a female drummer, and even more rare to find ones of color.

The music industry is a hard one to crack for anybody, but you encounter more problems when you're a woman who just wants to rock. That's not to say it's impossible, or to even discredit any woman in the industry (all of them are fantastic). Or even men in the industry. Some of my favorite musicians are men, whether you're talking about ones such as the late Kurt Cobain of Nirvana or Alex Turner of Arctic Monkeys. But women need to rock, too.

So anytime you're looking for a new band to check out, remember the women in the industry who fight every day to be taken seriously. And don't discredit women like Brittany Howard just because she's playing in a genre where it's hard to find women like her (even though rock 'n' roll was essentially built by African Americans).

She knows how to rock.