Queen for a Day (or Two): Your Guide to the 2015 Zippity Doo Dah Parade | Jackson Free Press | Jackson, MS

Queen for a Day (or Two): Your Guide to the 2015 Zippity Doo Dah Parade 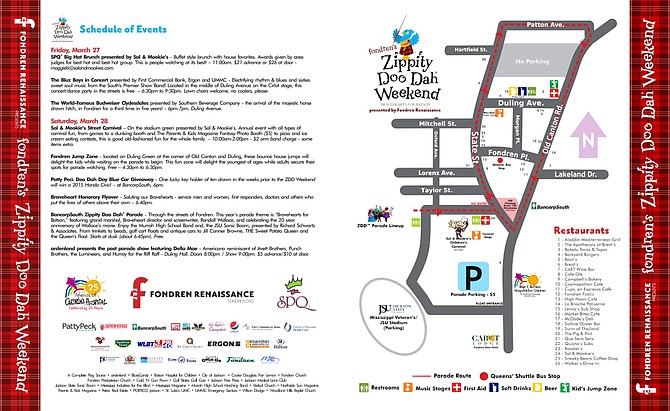 Sal & Mookie's New York Pizza & Ice Cream Joint (565 Taylor St.) will close for lunch Friday, March 27, for the Sweet Potato Queen Big Hat Brunch. Doors open at 10 a.m., and the event includes a buffet and the Big Hat contest. Spud Stud Scott Caples, who has won the contest numerous times, is the judge. Winners for Best Hat and Best Hat Group will receive prizes. Tickets for the brunch are $21 in advance, and $26 at the door. Doors open at 10:30 a.m., and the event begins at 11 a.m. For more information or to register, visit salandmookies.com.

The r&b and soul band The Bluz Boys will play in the middle of Duling Avenue on the Cirlot stage from 6:30 to 9:30 p.m. The event is free to the public. First Commercial Bank, Ergon, Inc., and the University of Mississippi Medical Center are the sponsors.

The Budweiser Clydesdales will arrive in Fondren for a third time in five years from 6 p.m. to 7 p.m. Southern Beverage Company is the sponsor.

Sal & Mookie's presents the annual Street Carnival on the stadium green at Veterans Memorial Stadium (2531 N. State St.) starting at 10 a.m. until 2 p.m. The event includes games, a dunking booth, a photo booth for $5 and pizza- and ice cream-eating contests. Armbands for the festival are $2.

The Fondren neighborhood will have bounce houses at the corner of Old Canton Road and Duling Avenue from 4:30 p.m. to 6:30 p.m. The event is free.

At 6 p.m, the 10 finalists in the Patty Peck Honda Doo Dah Day Blue Car Giveaway will gather at BancorpSouth (2710 N. State St.). A winner will receive the keys to a 2015 Honda Civic LX.

The theme of this year's Zippity Doo Dah Parade is "Bravehearts for Batson." The grand marshal is Randall Wallace, who wrote the script for the film "Braveheart" (and wears a mean kilt). The parade will also include performances by the Murrah High School Band and the Jackson State University Sonic Boom, golf-cart floats, antique cars and none other than the Sweet Potato Queens, led by Boss Queen Jill Conner Browne. The parade begins around 6:45 p.m.

After the parade ends, Della Mae will perform at Duling Hall (622 Duling Ave.) beginning at 9 p.m. The doors open at 8 p.m. Tickets are $5 in advance and $10 at the door. ardenland presents the event.

For more information about any of these events, visit zddparade.com.

Where does the money from Zippity Doo Dah go?

Since the event began in 2011, the proceeds have gone to the Blair E. Batson Children's Hospital. The 2014 ZDD proceeds supported the purchase of a van for the hospital's Palliative Care Unit to allow the five children who live there to go on field trips. Once ZDD was over, Randall Wallace wrote a check to pay remaining costs for the van. This year, the ZDD proceeds will go to the purchase of six "giraffe" beds for the Blair E. Batson's cardiac units. Since some of the children are too fragile to move even from the bed to a gurney for surgery, the beds will allow physicians to do procedures while the child stays in place. To buy all the beds, ZDD needs to raise $100,000.