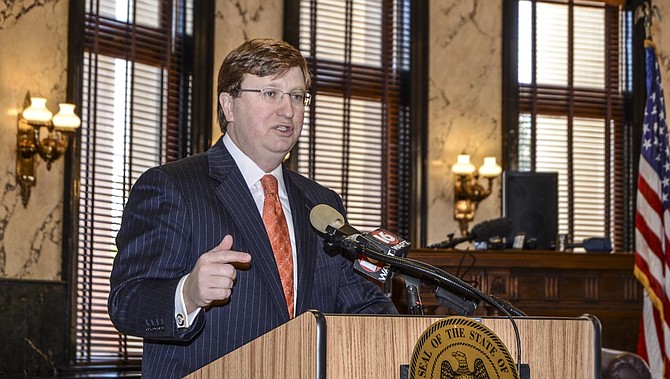 JACKSON, Miss. (AP) — House Democrats, in one of their most unified moments of the past four years, may have killed the chance for large tax cuts in Mississippi's current legislative session.

Needing a supermajority of 72 votes Wednesday to send a $555 million reduction in taxes to Gov. Phil Bryant, House Republicans mustered only 67 votes for House Bill 1629, with 52 Democrats rejecting the bill.

A Republican held the bill for more debate, but it was unclear what will happen before a March 26 deadline.

House Speaker Philip Gunn, R-Clinton, was downcast about chances of a revival, saying the vote will provide a contrast between parties in this fall's elections.

"We brought forward a measure to give real tax relief to the citizens," Gunn said. "This is our effort and the Democrats killed it. I think it draws a bright line of distinction."

Bryant and Lt. Gov. Tate Reeves, both Republicans, also criticized Democrats. Bryant blamed "the liberal Democrat leadership" for voting "to keep unnecessary taxes on small businesses and corporations in Mississippi and to prevent hardworking taxpayers from keeping a portion of their own money."

Republicans would have to flip at least five Democrats to pass the bill. Rep. Angela Cockerham of Magnolia was the only Democratic supporter.

"Hopefully, a few House Democrats will hear the cries of the people back home that need a little more money in their pockets to provide for their families," Reeves said.

The measure gradually reduces individual and corporate income taxes by $304 million. People wouldn't begin paying state income taxes until they reach $18,300 in taxable income by year 15, and then would pay a flat 5 percent rate. For someone earning $18,300 or more, the cut would save $350 a year. It also phases out Mississippi's $242-million-a-year corporate franchise tax over 10 years, and reduces self-employment taxes by $9 million.

"We're not giving away any money," Smith said. "We're letting people keep more of the money that they earn."

Democrats, in a debate running nearly three hours, argued the bill would cut taxes on corporations that pay too little while starving the state of revenue to provide services.

"This particular bill, for the most part, is a pay raise for corporate taxpayers, not individual taxpayers," Brown said.

Rep. Robert Johnson III, D-Natchez, said investing in schools, roads and other items is a better way to improve Mississippi.

"The only way you're going to help these people get any jobs and make any more money is to invest in your community," Johnson said.

Republicans might send the measure to a House-Senate conference, but House rules would probably bar consideration of a franchise tax cut, because it wasn't part of the original bill.

"If we send it to conference, I think we have lost the bill," Smith said during debate.