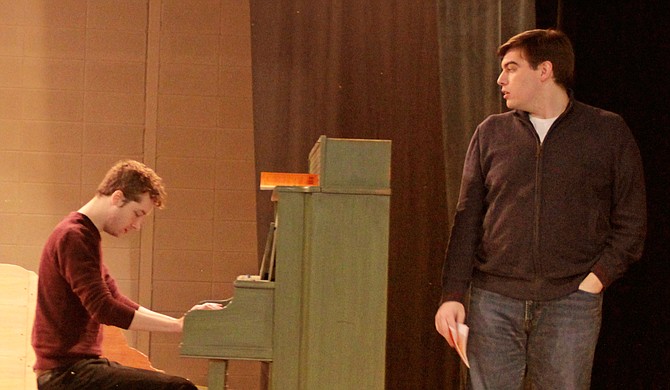 For the Unframed at New Stage Theatre series, Matt Faries (left) and Neill Kelly (right), star in “Dog Sees God: Confessions of a Teenage Blockhead,” which is an unauthorized parody of the “Peanuts” comic strip. Photo courtesy Amber Helsel

In the first frame of the final "Peanuts" comic strip, Charlie Brown holds a phone to his ear. "No, I think he's writing," he says, presumably in response to someone asking for Snoopy. Classic "Peanuts" characters, such as Brown, Linus and Lucy, are spread about on the bottom of the strip, which has a message from creator Charles Schulz, announcing his retirement from the comic after almost 50 years of publication and numerous films, books and cartoons. Newspapers published the comic strip on Sunday, Feb. 13, 2000, one day after Schulz' death.

Though the comic strip ended publication 15 years ago, Schulz' legacy lives on. Playwright Bert V. Royal, who wrote the screenplay for the 2010 romantic comedy "Easy A," wanted to pay tribute to "Peanuts" so he took the world of Charlie Brown and turned it on its head in "Dog Sees God: Confessions of a Teenage Blockhead."

The play, which premiered in 2004 as a reading, is an unauthorized parody of the comic strip that re-imagines Charlie Brown and friends in high school dealing with issues such as drug use and suicide.

"It deals with a lot of big issues, especially for teens," says Katie Beth Jewell, an acting and directing intern at New Stage Theatre. "Bullying is really a big issue in the play, and eating disorders and finding your sexual identity, and in general, finding your identity. That's the main point of it all—them trying to figure out who they are."

Jewell directs the "Unframed at New Stage Theatre" series' adaptation of the play, which runs March 13 through March 15.

A Dalton, Ga., native, Jewell grew up loving "Peanuts." Her first role in a musical was Sally in a production of "You're a Good Man, Charlie Brown" when she was in 8th grade.

"When I read the script (for 'Dog Sees God'), it just made me laugh so much because of all the little details he put in, the little hints at the characters," Jewell says.

Due to copyright law, Royal couldn't use the exact characters from "Peanuts," so he reinvented them. In his version, Charlie Brown, CB, is a high schooler who questions his sexuality when he meets Beethoven (Schroeder), who loves to play the piano. CB's Sister (Sally) has a changing philosophy on the world, switching between her thug and hippie personas.

Van (Linus) is a pothead. Pig-Pen has transformed from the messy kid with a constant dirt cloud following him to Matt, a homophobic germaphobe obsessed with sex who bullies Beethoven. Tricia (Peppermint Patty) and Marcy (Marcie) are best friends and party girls. Van's Sister (Lucy) set the Little Red-Haired Girl's hair on fire, and because of that, she's institutionalized.

Theatergoers may see other familiar elements from "Peanuts" in the play. The color schemes pay homage to the comic strip, including CB's yellow and black clothes and Van's trademark red. Jewell says the set includes the brick wall that Charlie Brown and Linus stood in front of and Snoopy's doghouse.

"It's a cool play that deals with dark issues in a darkly humorous way," Jewell says.

"Dog Sees God: Confessions of a Teenage Blockhead" is at 7:30 p.m., March 13-15, at The Warehouse Theatre (1000 Monroe St., 601-948-3533). Admission is $7 cash or check at the door. As with all Unframed plays, "Dog Sees God" is recommended for mature audiences. For more information, visit newstagetheatre.com or find Unframed at New Stage Theatre on Facebook.