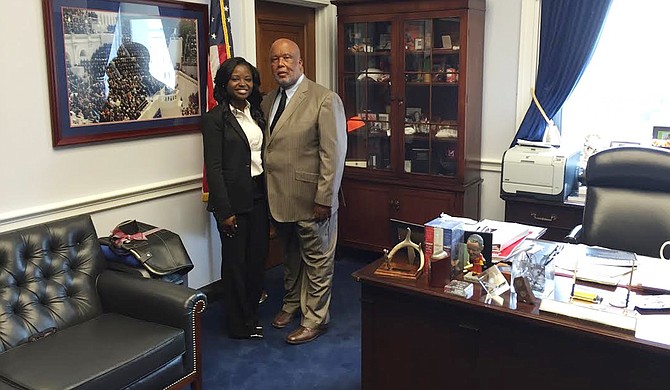 The peaceful air and beautiful landscape that Laura K. Cooper saw on her recent flight to Washington, D.C., is something she remembers vividly.

U.S. Rep. Bennie Thompson, D-2nd District, appointed the Greenville, Miss., native as his 2015 Congressional Black Caucus Foundation intern on June 1. Cooper, 21, will work with the congressman until July 25 in Washington, D.C. She will help Thompson stay in direct communication with constituents, organize social media and attend briefings that affect legislation, and then report back to Thompson.

"I was interested in politics since I was younger," Cooper said. "The first campaign I ever worked for was Congressman Bennie Thompson's. I later worked with Heather McTeer Hudson." McTeer Hudson was the first African American female, as well as first female, mayor of Greenville.

Cooper is a senior at Tougaloo College, where she is a member of Delta Sigma Theta Sorority. She is the former vice president of Tougaloo's Student Government Association, chairwoman of student activities, and the former event coordinator and vice president of the Mississippi Student Justice Alliance.

In her free time, Cooper enjoys reading African American fiction novels, dancing and acting. She plans to go to law school after completing her bachelor's degree in political science.

"Believe in yourself, because you never know where you may end up," Cooper said. "People are becoming discouraged and do not have the hope to dream for big things anymore. They just settle now. Anything is possible if you try. You just have to believe."