Pride and Prejudice: A Life-Long Battle from Civil Rights to LGBT Rights 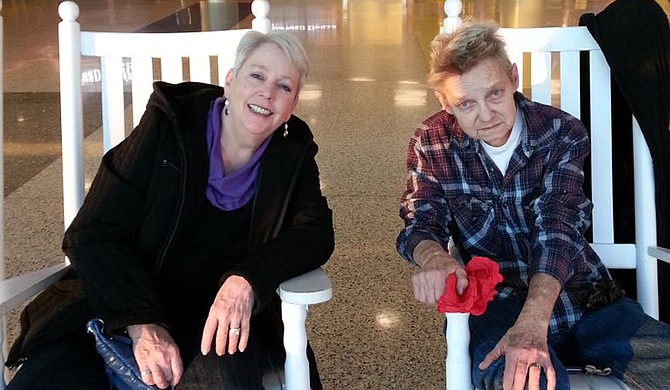 Charlene (left) and Dee Smith-Smathers (right) in the Boston Logan International Airport on their way home after getting married in Brookline, Mass. Photo courtesy Charlene Smith-Smathers

It was 1962 in Jackson, and Dee Smathers lived in an apartment on State Street with her first college roommate turned lover. Dee's family was living out of the state, so she did not worry about their judgment. Her partner, on the other hand, was living a secret life. That lie was destroyed when her parents discovered she was living with Dee.

They called Dee a "filthy lesbian." Dee had never heard the word "lesbian," so she had to ask her landlady what it meant. Stunned because she thought she and her lover were the only ones, Dee called all her friends and family, announcing what was used as an insult to proudly define her new identity.

"You can't go back into the closet after that," Dee said, laughing.

Dee got involved with the Civil Rights Movement in Mississippi—driving a civil-rights worker who couldn't drive, picking up African Americans and taking them to vote—but she didn't stay in Mississippi long. After a year and a half living abroad in Spain, she moved to Houston in 1965.

She worked as a social worker there but struggled with alcoholism and started to attend Alcoholics Anonymous meetings.

During this time, Dee witnessed the beginning of the feminist and LGBT movements in Houston. She sat in on meetings of a group that met called the Texas Homophile Educational Movement, women who would advocate for lesbians with protests and fund their jail bails. THEM was organizing events before Stonewall, the New York riots historically considered the catalyst of the national LGBT movement for equality, Dee said.

Lesbians in the 1960s were expected to look a certain way—wearing blue jeans, dressing in masculine attire. This violated a Houston city ordinance against cross-dressing, Dee said, and cops would come into bars and arrest women wearing jeans. Women would run to the bathrooms when the cops came and flip their jeans around—with the zipper in the back, to distinguish their pants from the men's. THEM would bail women out of jail who didn't make it to the bathroom in time.

Dee became involved with the gay Alcoholics Anonymous community in Houston that was vibrant in the early 1980s, and that's where she met Charlene Smith.

Charlene was born in Arkansas and raised in Mississippi. She moved to Houston with her then-husband, who struggled with alcoholism. Charlene began drinking, too, and attending AA meetings. It was only when she met another "lipstick lesbian" (a lesbian who dresses in a stereotypical feminine way) who confided in Charlene that she was gay, that Charlene, herself, felt comfortable admitting that she was a lesbian too. Charlene had to deal with ending her 17-year marriage and getting sober simultaneously.

It was not until Charlene got sober in November 1986 that Dee would consider dating her. The couple has been together ever since. Charlene ended her marriage, with some guilt but eventual confidence to live her life freely.

In 1995, they moved their organic farming business to Mississippi for more land and to be closer to Dee's father. Charlene also took an accountant job with the Department of Education.

But Mississippi did not feel like home after living in Houston for the couple.

"You set your watch back 20 years—or more," Charlene said.

It was only after the U.S. Supreme Court struck down the Defense of Marriage Act, or DOMA, in 2013 that the atmosphere and the dialogue changed. Dee and Charlene flew to Brookline, Mass., to get married. When they got home, the newly joined Smith-Smathers met hundreds of other advocates and LGBT members across the state—mainly using social media to stay connected. Some of those people had helped found Unity MS.

Knol Aust, co-founder and current chairman on the board of Unity MS, said DOMA empowered the LGBT community in Jackson. "DOMA had people thinking equality would work, and saying, 'Oh, the federal government recognizes us now,'" Aust said. "It woke a lot of people up."

Unity MS formed in 2004, following the amendment to the Mississippi Constitution banning same-sex marriages in the state with 86 percent of the public voting in its favor. The nonprofit is completely volunteer-run and funded by members and local donors, focusing on community building and engagement.

There were active LGBT groups in Mississippi prior to 2004, but Unity MS has brought together the LGBT community in the capital, hosting an annual event called OUToberfest in October to correspond with National Coming Out Day on Oct. 11.

The event has drawn people from Dallas, Memphis and Florida. The first OUToberfest was in 2005.

Ten years later, instead of OUToberfest, Unity MS is hosting the celebration in June—and this year, its timing is ripe.

Waiting on the Supreme Court

Even though Dee and Charlene's marriage is federally legitimate, their marriage is not recognized in the state of Mississippi. Dee has struggled with several health scares since returning to Mississippi from breast cancer to esophageal cancer to most recently, heart failure and end-stage chronic obstructive pulmonary disease.

Charlene has to carry her durable power of attorney for health-care papers whenever she takes Dee to doctor appointments because Dee has given Charlene the power to make medical decisions on her behalf.

The Smith-Smathers, like most of the LGBT community in Mississippi and nationwide, are "on edge" and have been all month, awaiting the decision.

"This morning when I was trying to get ready, my blood pressure was going through the roof, and my head was 'Ahhhh we got to go hurry, hurry,'" Charlene said.

The Smith-Smathers are going to come into town every Monday and Thursday for the rest of the month, anticipating the Supreme Court's decision and the celebrations to follow. They are packing overnight bags, too, so that they can stay in the middle of the action for what they hope will be a historical moment.

The Supreme Court is supposed to rule on marriage equality before July, which will determine the outcome of the Mississippi case, Campaign for Southern Equality v. Bryant, that was appealed to the 5th U.S. Circuit Court of Appeals. The court has halted proceedings in the case, waiting to see how the Supreme Court rules.

Jenni Smith, a co-founder of Unity MS, said the LGBT community in Jackson has come a long way in the past 20 years.

"(Back then) I was backing my car into a parking spot at the gay bar so no one would see my college decal sticker," Smith said.

This year, Mississippi Pride 2015 falls in the midst of what is a "momentous" time for the LGBT community, Smith said. Besides the Supreme Court's ruling, June is also national PRIDE month.

June 28 will be the 46th anniversary of Stonewall, the 1969 riots in New York that marked the beginning of the LGBT movement for equal rights. "We've had community leaders say we'll never see this in our lifetime, and now it's like, we don't have to be last this time," she said.

Before DOMA, Aust said it was difficult to get big donors or organizations to sponsor events in Mississippi. In the past few years, however, that has changed. The Human Rights Campaign has an office in Jackson, and GLAAD hosted a film screening at the Jackson Hilton Hotel last week.

"We became (one of) the last frontiers," Smith said. "We would use the argument (for funding) if we can win in Mississippi, we can win anywhere."

Mississippi native Robbie Fisher, 50, just came out last year, and this weekend will be her first big LGBT community event since then.

"Things started changing the past few years," she said. "I've always known I was gay, but seeing everyone coming forward after DOMA and the Religious Freedom Act, it emboldened me to come out."

Fisher produced a documentary called "A Mississippi Love Story," starring Eddie Outlaw and his husband, Justin McPherson, who own a salon and barber shop in Fondren. They married in Justin's father's home in California.

"I'm excited to see a crowd laying claim to spaces that everyone else has been in all these years," Outlaw said. "It's time to stick our flag in the ground in public—loud and proud."

Comment and read more about the LGBT community in Mississippi at www.jfp.ms/lgbt.