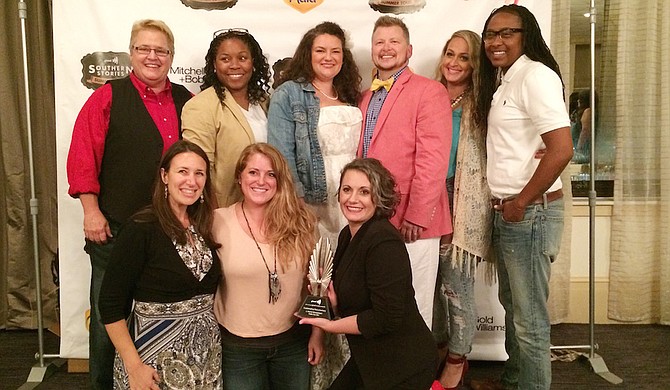 Cameron Stewart and Amber Cameron have been together five and a half years. About a year ago, the couple had a backyard wedding ceremony with vows and commitments—but because they live in Mississippi they could not get a license. Now, however, the couple is anticipating that the U.S. Supreme Court may legalize same-sex marriage this month.

"We're going to camp out at the courthouse," Cameron said.

The couple lives in the small town of Lumberton with their two kids, both from Amber's previous relationships. Their story came to life in "L Word Mississippi: Hate the Sin," a film that first aired last August on Showtime.

On Saturday night, Stewart and Cameron crammed together with other cast members and about 60 Mississippians in a ballroom in the Jackson Hilton penthouse. They were there to show their support for the film that displayed life of the LGBT community in the South—specifically lesbians. GLAAD hosted the screening, and all four of the featured couples in the film came to watch and discuss LGBT progress since the documentary came out.

The screening was more like a live theater production, as cast members reacted to themselves and their friends, laughing and sharing inside jokes or sneering at a pastor teaching congregants to "pray away the gay" in the film.

The film itself is pretty serious, detailing how the church, family members, laws and communities can create hostile environments, hindering these couples from living normal lives in Mississippi. The cast portrays their relationships and the consequences of living in Mississippi, where families often shun them and friends shame them on Facebook.

The event was a stop on GLAAD's Southern Stories bus tour.

Sarah Kate Ellis, president of GLAAD, said the group scheduled the tour following a Harris poll the organization conducted to gauge public opinion about the LGBT community. The poll revolved around comfort levels, asking 2,300 Americans questions like "How comfortable do you feel attending a same-sex wedding?" and "How comfortable do you feel finding out that your kid's teacher is LGBT?"

"What we found was that pretty much one-third of America is still very uncomfortable with the LGBT community," Ellis said. "We found that those numbers rose to more like two out of three people in the South."

GLAAD advocates for the LGBT community in the media. Part of GLAAD's purpose in coming to the South was to engage the LGBT communities and listen to couples share their stories in order to "accelerate acceptance" where it is most needed.

"We know that the way that you move acceptance forward is by meeting somebody who's LGBT or hearing someone's personal story," Ellis said.

"L Word Mississippi: Hate the Sin" does exactly that. The film won the GLAAD Media Award for "Outstanding Documentary" in 2015, and Jaimie Cohen, the field producer on the project, accepted the award Saturday night.

After the screening, some cast members shared what has happened in their lives since filming—10 months later.

'The Burden Is Lifted'

After the film came out, other lesbians in Lumberton and couples began to come out to Amber and Cameron.

"It's a good thing for our town," Stewart said. "We are asked a lot for advice from other couples."

One cast member, Brandiilyne Dear, said that while the LGBT community is winning, there is still work to be done. Even if the Supreme Court rules in favor of marriage equality, the battles will continue in Mississippi.

"We run the risk of getting married then losing our job or losing our housing, or we still can't adopt children," Dear said. "We've just scratched the surface, and I hope people are not like 'we won'—we've got to keep them educated and motivated."

Jana Haynes' struggle in the documentary was coming out to her mother. Since the film aired, her secret was out, and Jana finally had a long conversation with her mother.

"Since the movie, there has been a transformation in my relationship that my mother and I have," she said.

"The burden is lifted."

Several members of the cast spoke on a panel following the screening, discussing the climate for the LGBT community in Mississippi today. Dear started her own church since her old church community denounced her (after the pastor publicly outed her). Dear said that the cast is now a family.

"My favorite thing from this documentary is the connections and the relationships we have (now)," she said. "We spend a lot of time together."

Some of the cast even flew out to Palm Springs for Dear's marriage to her partner, Susan Mangum, earlier this year. The couple lives in Laurel, and since filming, have continued to build the Dandelion Project, an advocacy and outreach organization that provides resources to the LGBT community in Mississippi. Dear said the climate for the LGBT community in Mississippi seems to be changing rapidly.

"I believe the new mindset is greater than the old—even in our churches," Dear said. "The setbacks are becoming fewer. We're winning."

A federal mandate legalizing same-sex marriage, which could be handed down as early as this week, would be one victory the state of Mississippi thus far has denied its citizens.

Haynes said progress is slower because of people like her (or at least who she was in the film) who don't come out. One bad experience with a member of the LGBT community can become the face of the whole movement, she said.

Read more about the LGBT community in Mississippi at www.jfp.ms/lgbt.