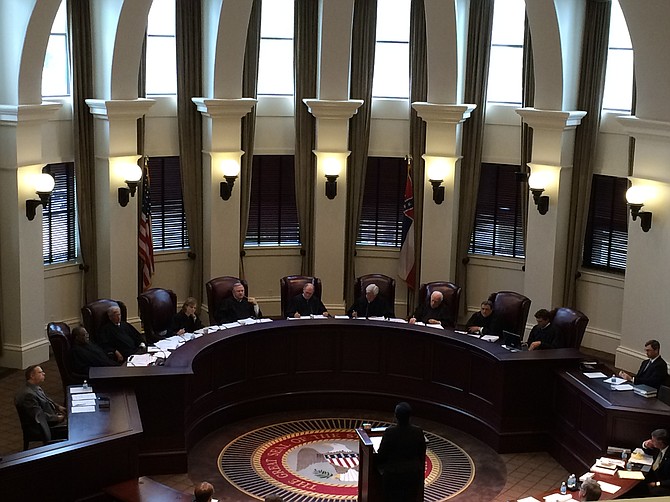 Latrice Westbrooks argues on behalf of the intervenors at the Mississippi Supreme Court on June 9. Photo by Arielle Dreher

The fate of an education ballot initiative now rests with the Mississippi Supreme Court, which heard oral arguments in the case this morning in Jackson. The nine justices will decide whether a lower court overstepped its authority when he rewrote an alternative proposed ballot initiative.

The road to today's hearing was long and winding.

Last fall, public-schools advocates, upset at the Legislature's refusal to follow the state's Mississippi Adequate Education Program, submitted some 200,000 signatures to ask voters whether education funding should be mandated in the state constitution. In response to that effort, known as Initiative 42, the Republican-led Legislature pushed an alternative called Initiative 42A.

Adrian Shipman, a mother of two from Oxford, sued in Hinds County Circuit Court and a Circuit Judge Winston Kidd rewrote the ballot title of alternative measure 42A, which prompted a lawsuit from Speaker Philip Gunn, R-Clinton, and Lt. Gov. Tate Reeves, on the Legislature's behalf.

In today's hearing, Presiding Justice Michael K. Randolph pointed out the key differences between the two initiatives, in his interpretation: Initiative 42 puts the onus for school funding on the state while 42A puts the onus on the Legislature. Initiative 42 includes judicial enforcement, although this is not stated in its title, while 42A apparently does not, in Randolph's estimation.

Nancy Loome, the executive director of the Parents' Campaign, said that 42A’s wording is misleading and that both 42 and 42A will require judicial enforcement.

“The court was very clear that in either case the courts will have the authority to enforce whatever the Constitution says about a child’s right to adequate education,” Loome told the Jackson Free Press. “So the assertion by some in the Legislature that the court will not have any jurisdiction over their alternative [measure] and have no way to enforce it is not true.”

Under state law, ballot titles are the only writing voters will see on the ballot—not the entire initiative. Mississippi law only allows 20 words in a ballot title.

The Ballot 42 title reads: “Should the State be required to provide for the support of an adequate and efficient system of free public schools?”

The Ballot 42A title, as rewritten by Kidd, that was contested in court on Tuesday is: “Should the Legislature establish and support effective schools, but not provide a mechanism to enforce that right?"

Legally, both initiatives would be subject to the law, and Judge Randolph noted the last difference between the measures is defining “adequate and efficient” education as opposed to “effective” education.

Loome said “adequate and efficient” were deliberate word choices in Initiative 42 because of their legal precedence. “Effective,” however, has no precedent Loome said.

“What the legislature wanted to do was make it more difficult for either version to pass,” Loome said. “It [42A] was clearly an attempt just to muddy the water, so it is difficult to write a title that distinguishes between the two options.”

Shipman, the lead plaintiff in the case, said she fully supports Initiative 42, following the hearing.

“It would be entirely too confusing for voters, and we want voters to understand that this is very simple,” she said. “You are either voting to fully fund education or you’re not.”

The justices did not issue a ruling today, but have granted this case expedited consideration. Their decision should be handed down in time to be printed on the November 2015 ballot.