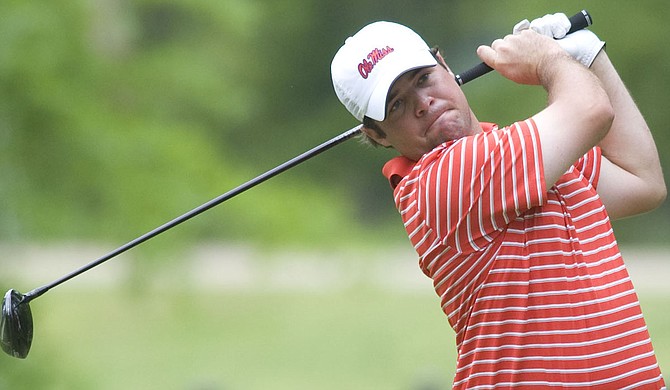 PGA Tour rookie Jonathan Randolph played brilliantly over 53 holes at the AT&T Byron Nelson Classic this past week in Irving, Texas. The final 19 was a welcome initiation into what the pressure cooker of the PGA Tour is all about.

Randolph carved up a soggy TPC Four Seasons course with a 69-63-65 start over three rounds. It was a breakthrough of sorts after a slow start to his rookie season. The former All American at Ole Miss he had missed the cut in six of his last eight starts and nine times in 14 events. But Randolph's ball-striking took a turn for the better in recent weeks, giving him a chance to capitalize on his dazzling putting skills in Irving. In doing so, he found himself in the infamous tour mix for the first time.

Suddenly, Randolph wasn't just another anonymous tour rookie. He led a major tournament late in the third round. Cameras trailed his walks up the fairway, hugging closer than the yardage book slotted in Randolph's back pocket. His name was plastered in bold and all caps atop course leaderboards and CBS graphics. After he had played the majority of his rookie season in relative obscurity, Randolph was now front and center.

Meanwhile, he still played an impossibly difficult game against the best players in the world. The PGA Tour is a pressure-packed cauldron that can swallow even the biggest stars, much less the uninitiated rookie.

It got the best of Randolph. Standing on the 18th tee tied for the lead, one good swing away from another impeccable round, he made his only bad stroke of the day. He pulled his drive into the water lining the fairway and compounded the error moments later with a short missed putt for a closing double-bogey.

It was the only scratch on another sterling scorecard, one that came at the end of a brutally long day amidst torrential Texas rain delays. And Randolph still carded a salty 65 to put himself in the penultimate group on Sunday. So it'd be unfair to connect the closing stumble to the heightened gravity of the moment, if Randolph hadn't played so flawlessly until that point. The pressure of the lead combined with the proximity of the clubhouse can do terrible things to a golfer's psyche.

Still, Randolph entered the final round tied for second place, just two shots behind the lead. But the fall from the rarefied air continued. He bogeyed the first two holes and never gained any momentum after that. His final-round 74 didn't include a single birdie and dropped him to a T-34 finish. It was as though the previously red-hot Randolph had put on Dr. Victor Fries' cryogenic suit. A Sunday full of such promise quickly became a disappointing slide.

Yet, it was every bit a breakthrough week for the affable Mississippian. He carded three straight rounds in the 60s for the first time in his career. His 63 on Friday proved one of the best rounds played in Irving all week. That made his performance the following day most impressive. PGA Tour players believe in the axiom that the hardest thing to do in golf is follow one really low score with another one. Randolph proved to be the exception with his 65 on Saturday, far outclassing his high-profile playing partners in the process: Masters champion Jordan Spieth and Ryder Cup veteran Hunter Mahan.

It was easily the brightest moment of Randolph's infant PGA Tour career.

But there's a reason for most axioms: They usually prove true. In the case of the tour, it's because low scores always mean more scrutiny and pressure. They bring television cameras around your every move. They place elite stars with enormous followings in your group. They create undue expectations for yourself and the course. They raise the stakes on every shot. They make you sit all day and think about what's at stake while you wait for everyone else to tee off.

In short, they put you in the mixer. Randolph found out what it's all about last week in Dallas, and that only bodes well for his future. It's an experience that most eventual champions have gone through at some level. After all, you have to have the spice to get thrown in the cauldron.

Jon Wiener is the host and producer of "Home Cookin'" on ESPN 105.9 FM The Zone. He has a bachelor's degree in English and master's degree in broadcast journalism. Follow him on Twitter at @ESPNHomeCookin.