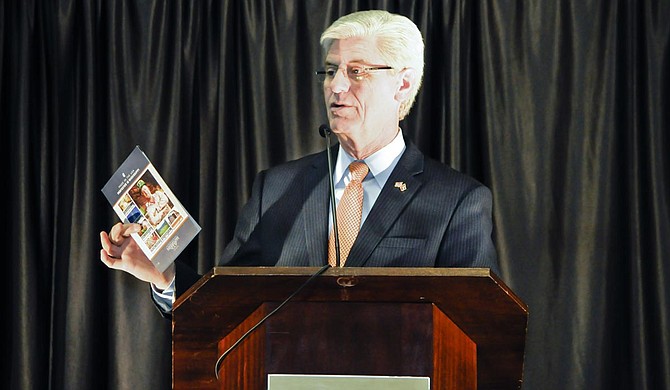 Since Gov. Phil Bryant took office in January of 2012, 26 bills have been filed in the Legislature to restore voting rights. Eight have made it to Bryant's desk. All eight became law without his signature. Photo by Trip Burns.

JACKSON, Miss. (AP) — In his first term, Gov. Phil Bryant has allowed eight bills to become law without his signature. All have been suffrage bills.

Mississippians convicted of certain felonies lose the right to vote. Those who lose their vote have to be pardoned by the governor or go to the Legislature, where it takes a two-thirds majority to restore a person's suffrage.

The constitution initially listed 10 crimes that would strip voting rights. Eleven other crimes were added in 2004 based on a state attorney general's opinion.

Other felonies not on the list, such as dealing drugs, don't affect voting rights.

Nationally, there are millions of released felons whose convictions have cost them the right to vote at least temporarily, if not permanently. To return to the ballot box, felons must negotiate suffrage laws that vary from state to state, in many cases working with election officials who can be both unfamiliar with the law and hostile to former convicts seeking to register.

Since Bryant took office in January of 2012, 26 bills have been filed in the Legislature to restore voting rights. Eight have made it to Bryant's desk. All eight became law without his signature.

"At times, the will of the Legislature is to override that established standard, and the governor chooses not to take an active role in that process," Webb told The Associated Press in an email.

The 26 suffrage bills filed in Bryant's four-year term is the smallest number in 16 years, according to the Mississippi Legislature website.

Lawmakers have from time to time introduced legislation to amend the Mississippi Constitution either to ban all felons from voting or to restore suffrage automatically for a first felony conviction upon completion of sentence. The bills have gone nowhere.

According to the National Conference of State Legislatures, between 1996 and 2008, 28 states passed new laws on felon voting rights. Among those changes, seven states repealed lifetime disenfranchisement laws, at least for some ex-offenders while 12 states simplified the process for regaining voting rights, for instance, by eliminating a waiting period or streamlining the paperwork process.

Other changes have followed:

In 2009, Washington restored the right to vote to felons who completed their sentences, while requiring them to re-register to vote.

In 2011, Tennessee added to the list of felons who will not be eligible to vote again.

In 2013, Delaware eliminated the five-year waiting period before voting rights are restored.

In 2015, Wyoming required the department of corrections to issue a certification of restoration of voting rights to certain nonviolent felons who are being released from the state's prisons.

The Sentencing Project has said Mississippi's suffrage laws are more restrictive that those of many other states. The Washington D.C.-based organization works with groups to encourage reconsideration of disenfranchisement policies.