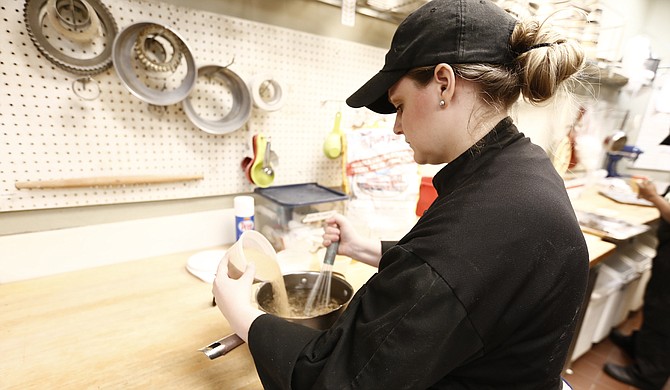 In a well-sanitized area of Broad Street Baking Company's kitchen, Jen Adelsheimer is making pizza dough. She mixes her dry ingredients, which include brown rice flour and tapioca flour, then adds yeast and water into the bowl. She pours it into a large stand mixer and adds oil, an Italian seasoning blend and other ingredients. When the dough is done mixing, she rolls it out quickly, as this particular dough has no rising time. She then bakes it partially for 20 minutes before sending it to the cooks for customers' orders.

This isn't just any old pizza dough. It's the newest part of Broad Street's gluten-sensitive menu, which the bakery started about six months ago.

"We have about eight to 10 (gluten-sensitive) desserts right now, and they all seem to be moving off the shelf,"  she says.

Broad Street started out with a couple of gluten-sensitive items: a chocolate chip cookie and a peanut butter cookie. At this point, the bakery has added coconut macaroons, paleo granola, a Rice Krispies treat, peanut-butter cheesecake with a chocolate ganache, vanilla-bean panna cotta and sugar-free coffee panna cotta.

"We knew that this has been a craving and a need and a want for our customers for a while, but we've always said, 'We can't do gluten-free because there's too much flour in this bakery,'" Adelsheimer says. "One day, it just dawned on me: 'Well, we'll sell it as gluten-sensitive.'"

She says that due to the flour in the air, the menu items, though made with gluten-free ingredients, may contain about 2 percent of the protein. Those who are intolerant or have celiac disease generally know how severe their allergy is, but they should still be wary.

Gluten is a protein found in grains such as wheat, barley and rye. It gives dough its elasticity, helps it rise and, in some cases, makes a chewy end product. For those with celiac disease, which is about one in 141 people in the U.S., gluten triggers an autoimmune system response that triggers white blood cells to attack the small intestine's lining. In 2011, a team of doctors hypothesized that in cases of gluten sensitivity, the protein causes the immune system to view gluten itself as an invader and fights it with inflammation inside and outside of the digestive tract.

"Most people are going to know how severe they are if they're going to eat in a restaurant," Adelsheimer says. "It's their decision, for the most part."

While Broad Street does not have a nutritionist working with them on the recipes, the staff at Bob's Red Mill, where the restaurant gets its gluten-free flours and other ingredients, helps her figure out what to use for each recipe.

As a way to understand the demands of the diet, Adelsheimer began living that lifestyle. Her house is now gluten-free, though she says she can't do it entirely because she still has to taste things at Broad Street.

As a child, she didn't realize that she could make a living off her love of baking. The Georgia native's aunt, Diane Walker, who lived in Clinton, would send Adelsheimer family recipes that she would make. She started her studies at Brenau University in Danesville, Ga., but then quit and joined Norwegian Cruise Line as a server from 2006 to 2007.

"I did that to try to find myself, because at that point, I did not know what I wanted to do," she says. On the cruise line, she says she fell in love with the idea of making a living off of baking. When she got home, she saw a commercial for Le Cordon Bleu and decided to go there that same year. She received her bachelor's degree in baking and pastries in 2009 from the school's Atlanta campus and then did an internship at Disney World at the Polynesian Village Resort. She went to Broad Street in 2010 as the pastry chef.

"It happened very fast," she says.