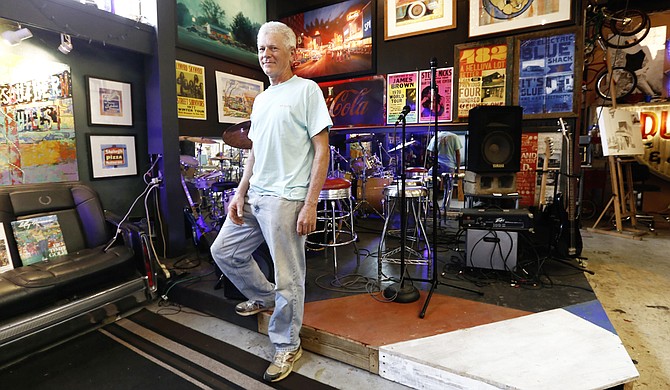 Mark Millet’s art studio in Ridgeland is adapted from an old car garage, which he says gives him the space to paint, work on cars and display his drum kit. Photo by Imani Khayyam.

Watercolor, acrylic and chalk paintings of old southern diners, football stars and country scenes cover every wall in Mark Millet's art studio except the far back one, where an electric sign, "The Dutch Bar & Lounge," glows warmly.

The north wall is where Millet gets his inspiration. Books of Millet's favorite classic American artists and illustrators such as Norman Rockwell, LeRoy Neiman and Bart Forbes cram a bookshelf from the floor of the studio to the ceiling. Next to the bookshelf sits a sofa that he created from the back-seat and taillights of a vintage black Cadillac.

The Ridgeland studio itself is a repurposed car garage, which Millet he says gives him enough space to paint, work on old cars and display his drum kit.

Both his mother and father were commercial artists in the '50s and '60s, working for The Clarion-Ledger. "It goes all the way back to France, (and to) all the Millets that have been artists," Millet says.

Millet attended Hinds Community College from 1977 to 1979 and got a job straight out of school as a commercial artist for Mississippi Federation Co-op. He has done artwork for companies like Raytheon Aerospace Municipalities. Now, he works as a freelance artist, painting commissions and his personal passions.

Though Millet has painted in mediums ranging from acrylic to chalk, his most famous works are watercolor paintings that document how Mississippi looked in the 1950s and '60s. He creates his works from images of old road signs, buildings and restaurants that Jackson locals will undoubtedly know, such as The Dutch Bar and Crechale's, where Millet was a bus boy when he was a teenager.

"Those are charming. Those are good memories," Millet says. "A lot of people relate with that. Nostalgia is a powerful thing."

Millet says it's important to preserve the memories of an older and now vanishing country town. "We have lost so much so quick," he says.

In the front of his studio, Millet has a dresser full of pictures he's taken throughout his career inside paper bags labeled where he took them, with locations that range from New Orleans to Flora, Miss. "You have to be a photographer before you can be an artist," Millet says. Often, when he doesn't know what to paint next, he'll go through the drawer and find something that catches his eye. "This'll be a treasure trove in a few years," Millet says, pulling photographs from a bag labeled "Pelahatchie Bay." "A lot of this stuff is long gone," he says.

But not everything is so serious with Millet's work. "I don't think, 'What's the next thing I need to paint?' I just paint what I like," Millet says.

Along with his more nostalgic paintings, Millet has painted many sports-related pieces, including one of his personal idols, Brett Favre. He says he started painting those because his youngest son, Kevin, played tennis for the University of Texas.

Millet's outlook on art is broad. Though his watercolor is his most noted, he does not have a favorite medium to work in, saying he would get bored too easily.

"You need all the differences to keep life from getting dull," Millet says. "Opposites attract, so if you only had one color, if you had no opposites, you'd get pretty bored."

Millet also says that art, in its pure form, transcends a paintbrush, or even a canvas.

"When somebody builds a custom car, the way it sits, the stance and the size of the wheels, and the color combination, that's an art form," he says. "They just got tools and a big wallet. That's art; they just don't know they're painters."