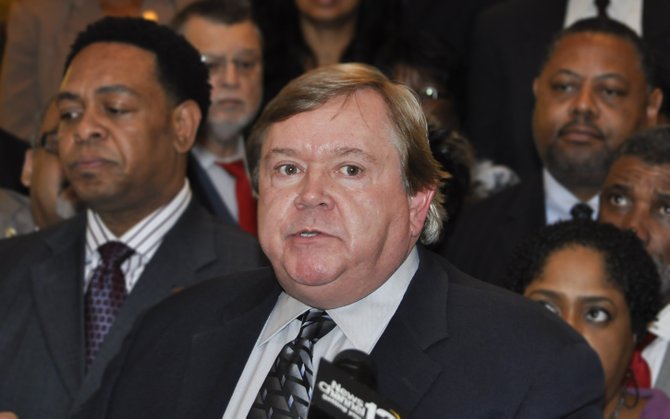 CARROLL COUNTY, Miss. — Students in this rural district ride to school on aging buses, then sit in 20-year-old portable classrooms or decrepit buildings reading outdated textbooks. The district of 1,009 students has only two teaching assistants to help in classrooms, and Superintendent Billy Joe Ferguson makes an annual salary of $18,000.

Such details only begin to describe “the wretched conditions” that exist in Carroll County due to years of underfunding, as outlined in a recent open letter to Republican Gov. Phil Bryant from Ferguson. The superintendent is among the educators, advocates and parents who were counting on a statewide ballot initiative to bring more money to the district’s impoverished schools.

Nearly 200,000 voters signed a petition to amend Mississippi’s constitution, adding to it language that would require the state “legislature to fund an adequate and efficient school system of free public schools.” Known as Amendment 42, its advocates consider it the best hope for holding the state accountable for fully funding persistently failing schools.

But Republican legislators introduced an alternative amendment that was passed by the Mississippi House of Representatives in a 64-57 vote on Tuesday. It deleted any reference to making the state responsible for providing funding to schools. Pending approval from the Senate, both initiatives will go on the ballot this November, making voters choose between these two similar-sounding yet antithetical amendments.

Dick Molpus, a former Democratic secretary of state and longtime education advocate in Mississippi, denounced the House amendment as “an attempt to circumvent the voter’s voice,” and effectively kill the effort to get more resources in the state’s cash-strapped schools, which post some of the lowest test scores in the U.S.

“We can’t afford textbooks, buildings are crumbling and the student teacher ratio is out the roof,’’ Molpus said. “A good number of our legislators believe our future is with an educated populace, but there is always a voice that could care less, and wants to sell it for cheap labor and low wages and poor education.”

A 2014 report by the Mississippi Center for Education Innovation found that underfunded schools have been forced to raise class sizes and hold off upgrading technology. Many districts have reported a lack of funds to pay for experienced teachers, supplies and improvements.

Funding shortcomings are apparent in schools throughout Mississippi. Thousands of children sit in dimly lit classrooms with asbestos-filled or paper-thin walls. During numerous visits, reporters from The Hechinger Report have found bathrooms with no doors on stalls, outside walkways with gaping holes, and outdated drainage systems that back up and flood when it rains.

In some schools, children learn from textbooks that are a decade old and have no access to science laboratories because the district can't afford the materials.

The House’s alternative amendment, which was passed Monday by the House constitution committee and was brought up immediately on the House floor Tuesday, sparked a furious two-hour debate -- along with allegations that members of the House were pressured to approve the competing amendment.

“I have talked to some members who just about got their arm twisted off at the shoulders about this vote,” said Rep. Steve Holland, D-Plantersville, who voted against the House amendment.

Sen. Cecil Brown, D-Jackson, who also voted against it, questioned the motivation for an alternative amendment, which many fear will split votes and prevent Amendment 42 from receiving the votes needed to pass in November. “The reason for that alternative language is to confuse the voters,” Brown said. “I know that, you know that, they know that, the media knows that, and the 200,000 people who signed this petition know that.”

Education advocates in Mississippi introduced Amendment 42 as part of the “Better Schools, Better Jobs,’’ campaign to boost the quality of education with increased funding they believe voters would endorse.

But Rep. Greg Snowden, R-Meridian, who proposed the alternative amendment, said that in part, fear over lawsuits led him to craft a new amendment. Snowden’s amendment has the legislature providing “for the establishment, maintenance, and support of an effective system of free public schools,” but not promising to fund it.

In states like Kansas and Florida, which have both made changes to the constitution language regarding education, lawsuits have been filed in the aftermath.

In Florida, one lawsuit seeks a “remedial plan” by the state to improve and better fund schools; in South Carolina, the state’s Supreme Court recently ruled in favor of several rural districts that sued the state over underfunding. The Court directed legislators and school districts to come up with a solution.

“‘Adequate and efficient’ is basically a lawsuit hand grenade that would be inserted into our constitution,” Snowden said, referring to the language in Amendment 42. It would also authorize state courts to enforce that in litigation.

Mississippi’s constitution now requires the state to provide for “the establishment, maintenance and support of free public schools upon such conditions and limitations as the Legislature may prescribe.”

During the House debate, Rep. Bobby Moak, D-Bogue Chitto, said the burden of funding schools has fallen to the local level and many counties can no longer support tax increases.

“The reason that the ballot initiative is there is because the legislature has not done their job through the years and folks are about tired of it,” Moak said. “They’re tired of having to fund their classrooms with popcorns and candy and cookie bake sales.”

Some critics say that more funding is not a guarantee that education will improve. Gov. Bryant has said fully funding the state’s education funding formula, the Mississippi Adequate Education Program, is not the answer.

Opponents of more funding also point to a recent report by the Joint Legislative Committee on Performance Evaluation and Expenditure Review (PEER), which found that some higher-rated school districts spent less per student than low-rated districts.

Out of fourteen Mississippi districts reviewed in that study, those that received higher education ratings from the state tended to spend an average of $6,672 per student, compared to an average of $9,539 per student in low-rated districts.

Still, several of the higher-rated districts that were sampled, like Enterprise and Rankin County, have significantly smaller percentages of low-income students than the poorly-rated districts, like Moss Point and Hattiesburg.

Research shows that poor students often start school behind and stay behind, and some data suggests that poor students benefit from school funding increases. A 2014 working paper from the National Bureau of Economic Research found that in districts that were impacted by court-mandated funding reforms and saw an increase in education funding, low-income students experienced long-term benefits.

In districts that received more funding, graduation rates for low-income students improved and students were less likely to live in poverty after graduation.

On Tuesday, Rep. Brown argued that fear of a lawsuit is an inadequate reason for the House amendment, and brought up a lawsuit that was filed last year by former Democratic Gov. Ronnie Musgrove on behalf of more than 20 school districts that seeks back pay for underfunding.

“Could there be a lawsuit? Sure, there could be a lawsuit,” Brown said. “You’ve already got a lawsuit.”

Michael Rebell, executive director of the Campaign for Educational Equity at Teachers College, Columbia University, says that there’s no track record to see how this may play out, as it’s rare for an education-related ballot initiative regarding a constitutional amendment to even be proposed, and he has not heard of alternative amendments for education funding amendments in states like Florida that have changed their constitutional language through a ballot process. Rebell that some push-back occurs in these situations because legislators may balk at the idea of a court enforcing an approved constitutional amendment.

“You do get some legislators who are not happy about the court ordering them to do various things, including spending more money,” Rebell said.

Even if one of the constitutional amendments passes, though, Rebell said it won’t guarantee that the legislature will follow through. In many cases, it requires more lawsuits and rulings; legislatures sometimes “drag their heels.”

Luther T. Munford, a Jackson attorney who drafted Amendment 42 for Better Schools, Better Jobs, said the state’s attorney general still has to approve a title for the new amendment, and the legislative budget office has to prepare a statement on how much it will cost. And of course, the Senate still has to vote on it before it can get on the ballot.

In Mississippi, meanwhile, superintendents like Ferguson in Carroll County wait for more resources – and wait.

“Without help this year, Carroll County School District could easily fall,” Ferguson wrote in his letter to Bryant. “Everything we have sacrificed and lived for will be in ashes … why not live up to what the law calls for and become an eternal hero for all the financially strapped school districts?”