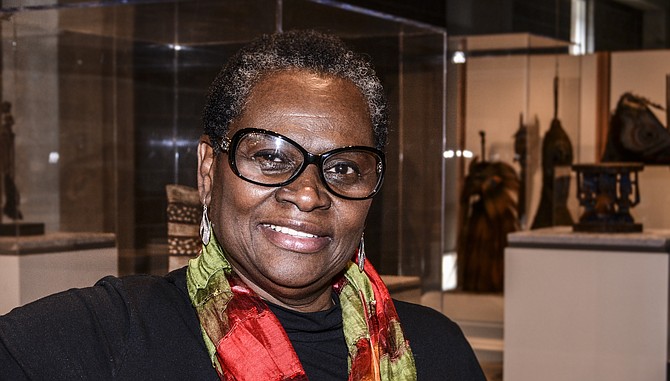 When Tougaloo College professor Johnnie Mae Maberry created one of her longest-running art exhibits, "Slave Narratives," which was sponsored by New York Life, it wasn't just about giving viewers a visual history of slavery. Maberry also wanted to give a voice to those trapped in modern-day slavery, such as human sex trafficking. She used Works Progress Administration and Frederick Douglass narratives as inspiration for the exhibit, which ran online at slaveryinamerica.org for seven years. The pieces offer an inside look at what motivates Maberry to create her art: her history, her family and God.

The exhibit is just one of her many accomplishments. Maberry was part of Tougaloo College's second class of bachelor of arts graduates in 1970, and, in 2001, she was the first Mississippi College student to earn a master of fine arts degree.

"I've always drawn. I've always been doing something artistic," Maberry says. "Even in the '60s when it just wasn't popular for a black girl trying to be an artist, I was still doing it."

Maberry enrolled at Tougaloo in 1966 during her senior year at Lanier High School as part of a pre-admissions program. By the end of her college freshman year, though, she was in a panic. Tougaloo offered art classes but not an art major. Luckily, in 1968, the college began offering one, and two years later, Maberry graduated with a bachelor's degree in art.

In 1989, Maberry received a master's degree in art education from Mississippi College, and began teaching at Tougaloo, where she has worked ever since. Later, she returned to MC, earning her master's degree in fine arts in 2001. Currently, Maberry is earning a doctorate in art philosophy through the Institute for Doctoral Studies in the Visual Arts, the world's first digital education and global residency doctorate program. Through it, she has completed residencies in places such as Istanbul and Berlin.

As Maberry has gotten older, her art has progressed from traditional to more abstract, though she says she "just loves painting, period." For her "From the Spirit" series, she used a method that involves taping the borders of a canvas and pouring paint on it while it's flat. Maberry says that once she adds the paint, she steps aside and "lets the spirit take over." Then, she begins to add texture. The outcome is a fluid-looking painting with overlapping colors and textures, reminiscent of the hues one might see with closed eyes.

*This story has been edited to reflect factcheck changes. Mary Elizabeth Gilbert-Manogin is studying for her doctorate at JSU, and she is currently working on a dissertation for it. Master's degree students do not do a dissertation, and Gilbert-Manogin has already completed her master's degree studies. Jackson Free Press apologizes for this error.