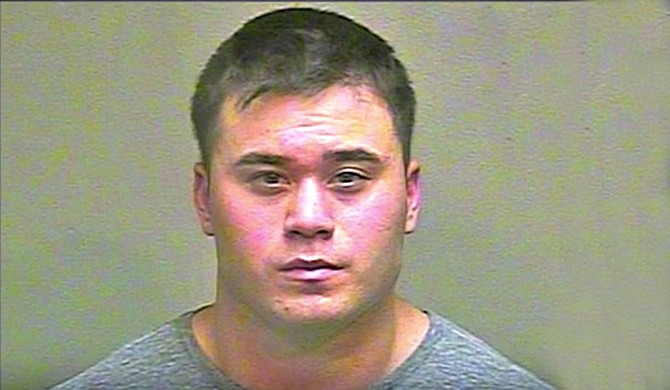 Daniel Holtzclaw was convicted of preying on a teenager and other women he met while working his beat in a minority, low-income neighborhood. Photo courtesy Youtube/The Young Turks Channel

OKLAHOMA CITY (AP) — A teenager's mother clapped her hands and screamed with joy, and a former police officer hung his head and sobbed, as a jury convicted him of raping her daughter and sexually assaulting seven other women.

The mother of Daniel Holtzclaw's youngest accuser said she hopes his guilty verdict will show everyone that sexual misconduct by police officers has to be taken seriously.

"It's a problem for the nation," she told The Associated Press.

Holtzclaw was convicted Thursday night of preying on the teenager and other women he met while working his beat in a minority, low-income neighborhood. He could spend the rest of his life in prison; the jury recommended 263 years, including 30-year sentences for each of four first-degree rape convictions.

The jury found Holtzclaw guilty of 18 counts connected to eight of the 13 women, and acquitted him of 18 others.

Sexual misconduct committed by law enforcement officers is a problem that has concerned police chiefs for years.

Holtzclaw's case was among those examined in a yearlong Associated Press investigation that revealed about 1,000 officers nationwide had lost their licenses for sex crimes or other sexual misconduct over a six-year period.

The AP's finding is undoubtedly an undercount, since not every state has a process for banning problem officers from re-entering law enforcement, and states that do vary greatly in how they report and prosecute wrongdoers.

One factor stands out, however — victims tend to be among society's most vulnerable: juveniles, drug addicts, and women in custody or with a criminal history.

After Oklahoma City Police received a complaint from a grandmother who said Holtzclaw forced her to perform oral sex during a traffic stop, investigators identified a dozen other women who said he had victimized them as well.

The youngest, a 17-year-old girl, was the last to testify at his trial.

The girl recalled Holtzclaw pulling up in his police car as she walked home one night in June 2014. Holtzclaw drove her to her family's home and walked her to the porch, where he told her he had to search her. She said he grabbed her breasts, then pulled down her pink shorts and raped her.

He asked if it was the first time she had ever had sex with a cop, she testified. Her DNA was found on his uniform trousers.

Holtzclaw's attorney, Scott Adams, asked the girl about perceived inconsistencies in her testimony as well as her use of drugs. She pushed back, telling the lawyer: "I'm really getting upset by the way you're coming after me."

The jury convicted Holtzclaw of first-degree rape, second-degree rape and sexual battery in the girl's case.

Her mother said her daughter doesn't want to talk about it anymore, and is relieved that her "long journey to justice" is over.

The AP does not identify victims of sex crimes without their consent and is not using the mother's name, to avoid identifying her daughter.

Several of Holtzclaw's accusers had been arrested or convicted of crimes, and his attorney made this a cornerstone of his defense. Adams questioned several women at length about whether they were high at the time, and noted that most didn't come forward until investigators identified them as possible victims.

Holtzclaw was convicted of one of two charges related to a woman who testified he gave her a ride home, then followed her into her bedroom and raped her, telling her, "This is better than county jail."

That woman testified in orange scrubs and handcuffs, because she had been jailed on drug charges hours before appearing in court, but the jury still convicted Holtzclaw of forcible oral sodomy in her case.

The defense attorney declined to comment after the verdict.

Holtzclaw, who turned 29 on Thursday, was a former college football star who joined law enforcement after a brief attempt at pursuing an NFL career. He was fired before the trial began, and as the verdict was read, he rocked back and forth, sobbing in his chair.

His mother, sister and father — a police officer in Enid, about 100 miles northwest of Oklahoma City — were in the courtroom, along with at least one of his accusers and several black community leaders.

Questions of race also surrounded the trial. Holtzclaw is half-white, half-Japanese. All his accusers are black. The case was heard by an all-white jury, and after the verdict, Oklahoma County District Attorney David Prater said Holtzclaw's attorneys were squarely responsible for that.

Some supporters of the women had questioned whether the jury would fairly judge their allegations, and Prater said he had wanted a jury that was a "good cross-section of our community," but defense attorneys eliminated every potential black juror during the selection process.

Prater said he hopes people will see that his office and local law enforcement will stand up for any one, no matter their race or background.

"I don't care what they look like, where they go to church, what god they worship, or how much money they make," he said. "We stand up for people in this community."