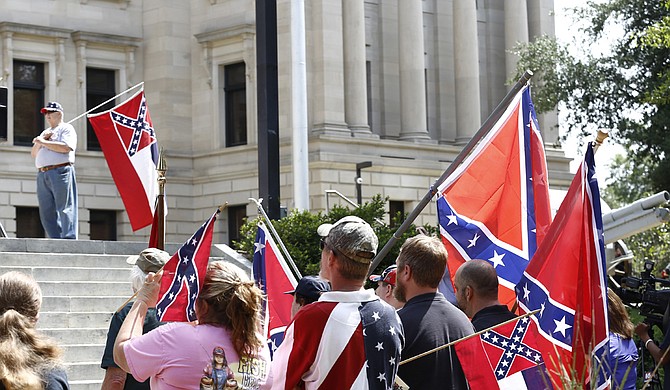 Confederate flag supporters at a rally at the state capitol. Imani Khayyam/File Photo

JACKSON, Miss. (AP) — Organizers of a new ballot initiative are seeking to keep the Confederate battle emblem on Mississippi's flag by putting the flag design into the state constitution.

A statewide vote could be more than three years away, and the sponsors of Initiative 54 say Attorney General Jim Hood is mischaracterizing the proposal in a way that could confuse voters.

Every initiative must have a title, or short description of a proposed amendment, before sponsors can circulate petitions to try to get it on the statewide ballot.

Flag amendment sponsors want the title of Initiative 54 to refer to the flag that's now in use as "the 1894 flag." It includes the Confederate emblem in the upper left corner.

Instead, a title written by the attorney general's staff refers to the "current" flag.

Initiative supporter Greg Stewart said in an interview Wednesday that he worries legislators might remove the Confederate emblem from the state flag before an initiative comes up for a vote, so the term "current" flag would no longer be accurate by then.

"That would be very confusing to the public," said Stewart, who is the administrator of Beauvoir, the last home of Confederate president Jefferson Davis. "If you said '1894,' then people would know what you're talking about."

Hood's office did not immediately return a call for comment on the ballot title.

Confederate symbols have come under increased public scrutiny since the June 17 massacre of nine black worshippers at a church in Charleston, South Carolina. Days after the slayings, Mississippi House Speaker Philip Gunn became the first high-profile Republican elected official to say Mississippi should remove the Confederate battle emblem from its flag. Several cities and some counties have stopped displaying the state flag on public property, saying the symbol is divisive.

The woman sponsoring the flag initiative is Gulfport resident Kitsaa Jon Stevens, who also works at Beavoir, in Biloxi. Stevens filed a lawsuit Tuesday in Hinds County Circuit Court, asking a judge to rewrite the ballot title so it would refer to the 1894 flag. It was not immediately clear how soon a judge might rule.

November 2018 is the earliest that the flag proposal is likely to be on the ballot because the initiative process is time-consuming. Once a ballot title is set, sponsors have a year to gather signatures from more than 107,000 registered voters. Then, the Legislature gets a chance to put an alternative proposal dealing with the same subject on the next statewide ballot.

Most proposed initiatives never make it to the ballot because sponsors fall short of signatures. Those that get on the ballot typically need most of the one-year allotment to circulate petitions. For Initiative 54 to be on the November 2016 ballot, completed petitions would have to be submitted before January. There is no statewide election in 2017, so the next possibility for a vote is November 2018.

In a 2001 statewide election, Mississippi voters decided by a nearly 2-to-1 margin to keep the Confederate emblem on the state flag. However, that vote didn't put the flag design into the state constitution.