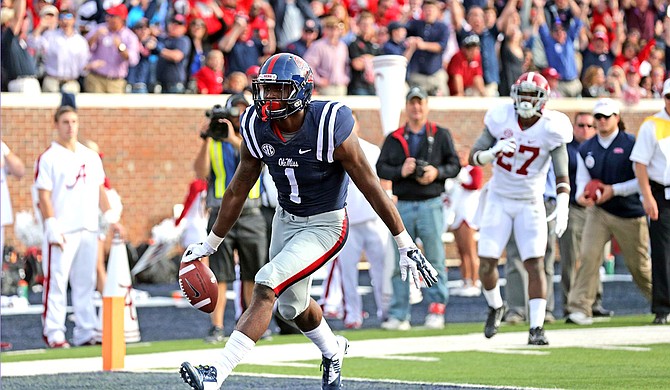 The Rebels reeled off seven straight wins and reached No. 3 in the polls last season. The team beat Boise State University to start, though the Broncos went on to become Fiesta Bowl champs. UM beat the University of Louisiana-Lafayette and the University of Memphis, both of which went to a bowl game, and pulled off one of the biggest upsets of the season, handing the University of Alabama its only regular-season loss. There was no letdown after beating the Crimson Tide as the Rebels won against Texas A&M University and Tennessee—two more bowl teams. Then came the LSU game. The Rebels had a chance to at least tie the game late before quarterback Bo Wallace forced a pass that ended the game as an interception.

The next week, UM ended up in a shootout against Auburn. Once again, the Rebels went away heartbroken as wide receiver Laquon Treadwell broke his leg mere inches before scoring the game-winning touchdown. Treadwell fumbled, and Auburn recovered to seal the win. Against the University of Arkansas Razorbacks, the Rebels looked lost and mentally drained in a 30-0 beatdown. It looked like the season would end on a perfect note after the Rebels dispatched MSU in the Egg Bowl, leaving just the Peach Bowl to finish the season.

But New Year's Eve was a nightmare for UM. In the Peach Bowl, the Rebels ran up against some angry Texas Christian University Horned Frogs, and Wallace played one of his worst games in his final college start. TCU blew out Ole Miss 42-3 to make a statement about the playoff selections.

The Rebels are bringing back most of their core from last season, which includes five offensive linemen and four defensive linemen. One of the biggest losses this season was when the Kansas City Chiefs invited Bo Wallace to a rookie mini-camp. There are plenty of options to replace him, including transfer Chad Kelly, who is the nephew of Buffalo Bills and Hall of Famer quarterback Jim Kelly. Whoever the quarterback is, the team will have junior offensive lineman Laremy Tunsil leading the protection. The new quarterback will also have plenty of weapons with senior running back Jaylen Walton, junior tight end Evan Engram, senior wide receiver Cody Core, and Treadwell.

The defense has to replace Senquez Golson and Cody Prewitt in the secondary, but most of the core of this unit returns. The Nkemdiche brothers, linebacker C.J. Johnson and junior safety Tony Conner also return. Overall, the defense should be in good shape with the depth and talent that each recruiting class has added.

If there ever was a season where the Rebels are going to win the SEC West title, this might be that one. UM has most of the pieces in place, and if Kelly or one of the other quarterbacks can become a reliable playmaker, the sky's the limit for this team. On defense, a better pass rush would be nice, but the Rebels were exceptional in pass coverage last season. Treadwell and Tunsil should be healthy after their injuries last year.