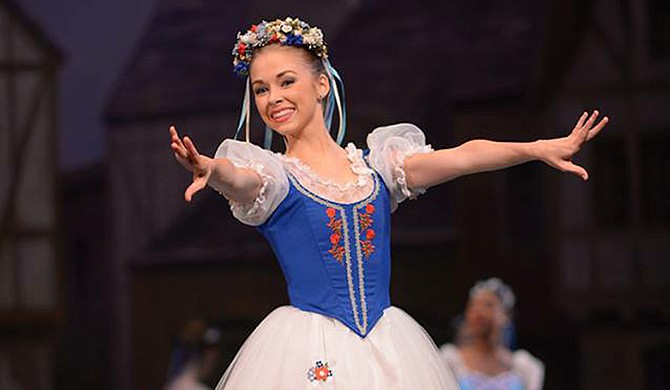 Naomi Wilson has performed ballet for 13 years, beginning when she was 3, and came to Ballet Mississippi in January 2013. Last summer, Wilson, 16, trained at Kansas City Ballet in Missouri, and before that, she spent the summer at Kirov Academy of Ballet in Washington D.C., in 2013. This Sunday, April 26, she will be the lead in Ballet Mississippi's performance of "Coppelia" in Thalia Mara Hall.

The ballet follows a young couple, Franz and Swanilda, whose relationship is briefly interrupted when Franz becomes infatuated with a life-sized doll, Coppelia, believing she is real. When Swanilda becomes jealous of the doll, she pretends to be Coppelia and comes to life for her fiance to save her impending marriage. "Coppelia" is a tale of young romance and triumph as love conquers all.

"It's one of my favorite ballets, so when I learned I got the role, I was really, really excited," Wilson says. Aside from "The Nutcracker," which she performed in this past December as the Sugar Plum Fairy, "Coppelia" will be her first full-length production and her first time leading in all acts of a ballet. "I'm a little nervous but mostly excited," she says.

Wilson plays Swanilda in the production. "She's pretty sassy, but by the third act, she kind of grows up and becomes more mature," she says of her character. "She kind of 'owns the village.'"

Wilson says she sees some of Swanilda's characteristics in herself. "In some instances, she is kind of ditzy, and sometimes I am a little ditzy," she says. "But other times she is really cunning, and I like to think that I am pretty crafty myself."

Mikhail Ilyin, who also trained at Kirov, will play Franz. He has danced with American Ballet Theater, and in 2002, he won a bronze medal in the U.S.A. International Ballet Competition, which takes place at Thalia Mara Hall every four years.

As a young girl, Wilson aspired to be a "ballerina-astronaut" but learned those don't exist—yet. Wilson is now a junior at Park Place Christian Academy in Pearl. She has been rehearsing for "Coppelia" since the second week of January. She says she practices two to three hours per night, all day Saturdays and sometimes Sundays, for a total of 20 hours per week. Fridays are usually her only days away from the stage.

"It can get kind of stressful, like when I get home from rehearsals really late, and I have to stay up later to finish (school work), or I have to set my alarm 30 minutes earlier to finish in the mornings. It's hard, but I think it's worth it."

Ballet Mississippi will host the pre-performance Coppelia Doll Tea Party on Sunday, April 26, at noon at the Mississippi Museum of Art's Palette Cafe (380 S. Lamar St., 601-960-1515). The luncheon will include live musical entertainment and visits from the stars of "Coppelia." Tickets are $30 per person, and children are encouraged to bring their favorite dolls or action figures.