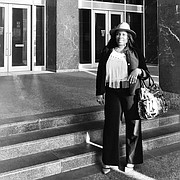 I wear many hats in Jackson.

My bread and butter comes from managing social media for the Mississippi Film Office. But what I most enjoy doing is working on special projects like "#HappyMS" with co-producers Nina Parikh, Philip Scarborough, Tom Beck and Terry Sullivan. I'm also very much occupied with catching up on my reading for the Mississippi Black Leadership Institute and fulfilling my role as a volunteer media coordinator for the Cool Kids Movement, a youth organization in Grenada, Miss.

But lately, my attention has been focused on the 16th annual Crossroads Film Festival since I am its workshop and panel coordinator.

It hardly seems like it was 10 years ago that I graduated from Howard University in Washington, D.C., with a bachelor's degree in filmmaking and returned to Jackson to work with the Crossroads Film Festival. I was the first African American to coordinate the festival before leaving to work with the National Black Programming Consortium in New York City two years later. Then, in 2009, I returned to the festival to debut my first producer credit for the highly acclaimed feature documentary, "Prom Night in Mississippi."

Now, this year, I am returning to launch the Independent Black Film Collective, an organization that aims to bring more diversity within the film-festival community. In more than a decade of working in the film industry in Mississippi, New York and abroad, I've observed a pervasive lack of diversity in film. Upon returning to Jackson in 2013, I knew I had to share the wealth of my experience with my community.

The IBFC's mission is to deepen the engagement of people of color with existing film communities: film festivals, funders, film crews, etc. I am grateful to Crossroads Film Festival for becoming the first to enter into a professional partnership with the IBFC and for allowing me to launch during its 16th festival April 9-12 in Jackson.

The goal of the IBFC launch and festival partnership is to foster immediate interest and engagement with the African American community in Jackson and beyond. We hope that more members of the African American community will join the conversation and learn about the resources and networks available to them, as well as how to navigate a festival in order to gain maximum benefit and to connect with films and filmmakers. Within the next year, I plan to continue the roll out of IBFC, which will include special events in Mississippi and other locations. I hope to build a team that includes individuals and more community partners who will share in IBFC's vision. The main focus will be developing a solid program of annual events and securing funds to ensure that the organization will be sustained.

While working with the National Black Programming Consortium, I met Angela Tucker, an African American filmmaker who created the satirical documentary web series, "Black Folk Don't," which examines and challenges common stereotypes, as well as the feature-length documentary, "(A)Sexual."

I was inspired and impressed by her work within the film industry and film-festival community, so I invited her to take part in the launch of the IBFC during the Crossroads Film Festival. The two organizations will host her workshop "In the Web with Angela Tucker" from 1:15 to 2:45 p.m. at Malco Grandview Cinema (221 Grandview Blvd., Madison, 601-898-7819). This event is free. The workshop will cover the ins and outs of producing a web-based series and will highlight Tucker's experiences directing "Black Folk Don't," which is in its third season and which Time Magazine featured in its "10 Ideas That Are Changing Your Life."

The IBFC is on Facebook, Instagram and Twitter, and you can find it under @collectiveblack. Whether you are a filmmaker, writer, producer, student, singer/songwriter, visual artist, carpenter, stylist, seamstress or film enthusiast, the IBFC invites you to be a part of the program. Anyone who is interested in working with IBFC, please email [email protected]