‘Laugh So You Don’t Cry’ 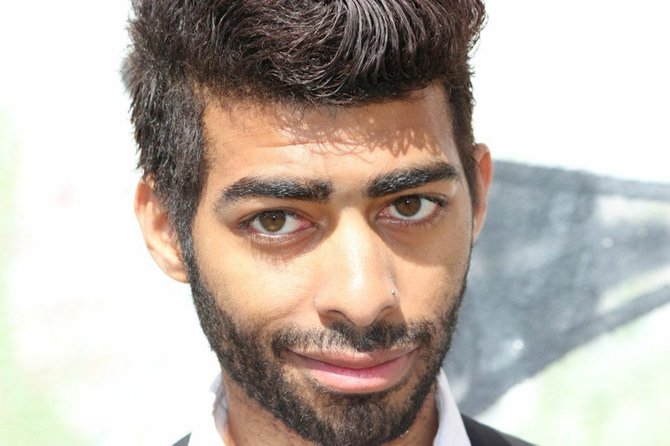 Josh Lewis suffers from sickle cell disease, which is a hereditary blood disorder that causes a patient’s blood cells to turn into sickle shapes.

Josh Lewis hunches forward in a vinyl chair in the emergency-room waiting area. His thin arms lie in a crumpled heap in his lap. He massages the elbow of his right arm with his left hand as he rocks back and forth in a slow, jerking motion. His eyes look glassy, exhausted from the familiar, biting pain.

Despite his position, he is impeccably dressed, as always. His dark hair is swept away from his face in a voluminous style. Lewis, normally chatty and expressive, speaks slowly in a wavering pitch. He forces a smile, but his lips quiver. "Laugh so you don't cry," he tells himself.

Lewis is having a pain crisis caused by sickle cell disease, a hereditary blood disorder. Patients with sickle cell have "sickle" or crescent-shaped blood cells caused by abnormal hemoglobin, a protein that carries oxygen. Sickled blood cells have a short lifespan and often stick together, blocking blood flow in small vessels in the limbs and organs. The disease can cause anemia, jaundice, gallstones, pain crises, vascular complications, stroke, organ damage and weak immunity. Approximately 100,000 Americans suffer from sickle cell.

Lewis, who lives in Jackson with his wife, Kimberly, has struggled with the illness his whole life. He works in artists and repertoire for NOW Entertainment, where he is also a producer and writer.

Lewis has received treatment from various hospitals, locally and out-of-state. When he has a sickle-cell crisis, he is in an inordinate amount of pain. He believes that sickle-cell patients are stigmatized, largely because of racial prejudices.

The Centers for Disease Control and Prevention report one out of every 500 African American children born in the U.S. has sickle cell disease. One out of every 100 Latinos has the trait, and one in 36,000 are born with sickle cell. Sickle cell most often affects people with Indian, Middle Eastern, Hispanic, African and Mediterranean heritages.

Lewis believes that because the disorder affects mostly racial minorities, it doesn't receive the attention or research funding it deserves. When compared to other diseases, sickle cell often lags behind in research and funding.

Lewis believes that under-treatment and disorganization occurs in hospitals, because emergency room staff do not always have the specific knowledge to properly treat the person. On one occasion, Lewis waited from 8 a.m. to 8 p.m. for treatment.

He says that ER doctors will frequently try to give him a shot of pain medication and a common NSAID pain reliever, such as aspirin or ibuprofen, which has little effect on his pain. "I know patients who have stopped going altogether because of inadequate care," Lewis says.

There is hope, though. University of Mississippi Medical Center recently opened a sickle-cell clinic to offer specialized care to those who suffer from the disease. The clinic is located in UMMC's day-surgery area and is open from 8 a.m. to 5 p.m. It is the only clinic of its kind in Mississippi. UMMC says it will ease the congestion in the Emergency Department.

Lewis visited the clinic at UMMC for the first time July 15. After checking into the ER at the clinic, Lewis was quickly wheeled to the day-surgery waiting room. A smiling nurse then escorted him to a private room. She calmly moved about the room, asked questions, drew his blood and gave him fluids. A nurse practitioner figured out how best to treat Lewis' pain. Then, the nurse administered Lewis the medicine he needed and checked in on him.

Lewis now sits in the hospital bed, gently massaging his arm. "We're trending upward," he says with a grin. Lewis encourages other sickle-cell patients to try the new clinic at UMMC, which allows them to bypass the ER. Lewis hopes that the sickle-cell clinic will solve many of the problems he has encountered in hospitals over his lifetime of treatment. "It's a step in the right direction," Lewis says.