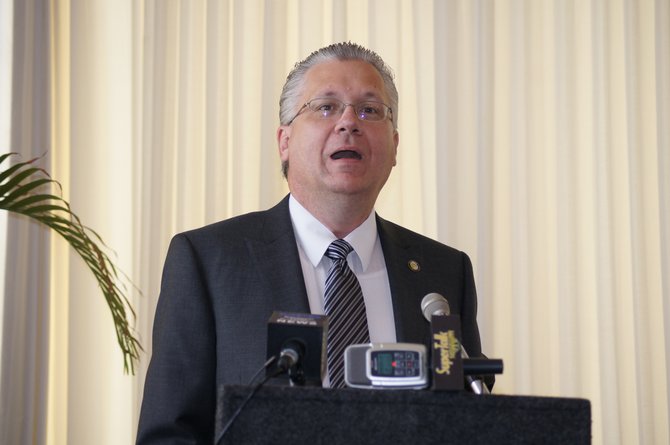 As Mississippi Democratic Party chairman, Rickey Cole believes in small changes to the state’s election process as opposed to a complete overhaul. Photo by R.L. Nave.

The 2014 U.S. Senate race pinned two sides of the Republican Party against each other in a heated primary that presented more possible problems with Mississippi's election law than it did focus on issues facing the state and solutions in either the Mississippi Legislature or the U.S. Congress.

For two months the Chris McDaniel camp complained about the Thad Cochran camp in a tirade that made it easy for the media to take sides by playing off the Tea Party's election integrity concerns as baseless feuding. But Mississippi's election process, especially in the primary stage, does concern the state and the general public so much that Secretary of State Delbert Hosemann convened a panel of 51 state citizens to discuss just that on Sept. 10 at Old Capitol Inn.

Both state party chairmen—Rickey Cole with the Democratic Party and Joe Nosef with the Republicans—warned against taking drastic steps to change the state's election law. Still, all the political leaders tended to agree that some reform is needed.

Laws from the Dark Ages?

"They were written during a time when there was one-party rule in the state," Wilson said. "There are a lot of timelines and deadlines and requirements under the election procedures that really need to be revisited in a comprehensive way."

Mississippi has open party primaries, which means that anyone can choose which primary they want to vote in, even though candidates of the same party will run against each other initially, then face the other party's chosen candidate in the general election. There is no party registration. Voting track record is not taken into account.

A person can only cast one vote in the primary election and, in the case of a runoff, cannot switch party lines from the party they voted with initially—but other than that, open party primaries are fair game.

This caused much confusion during the U.S. Senate race, highlighting the practice of one party's voters raiding the opposite party's primary to influence the outcome of the general election—an open practice in Mississippi.

State Sen. McDaniel recently called for closed primaries, which could have benefitted his race against incumbent Cochran.

"I think we have to move toward some sort of closed primary system at some point," McDaniel said.

But the openness of a primary election is a state policy decision and one most officials are not in favor of changing. "We shouldn't have a knee-jerk reaction to our primary and what people think may or may not have happened," Nosef said at the panel.

Political experts say the state is unlikely to completely change the election process from open to either closed, semi-closed or "top two" primaries, but Hosemann's panel did discuss them.

Louisiana, for example, has what is called a "top two" or "jungle" primary—in which all the candidates are initially placed on the same ballot, regardless of their party, and the candidates with the top two highest percentages enter into a runoff.

Louisiana Secretary of State Tom Schedler spoke to the panel touting his "top two" system and its successfulness. Two other states—California and Washington—also have "top two" primaries. He said the closed primary system, which Louisiana has used before and which requires primary voters to have party registration, was not a suitable system—although 18 states have closed primaries as well as the District of Columbia.

Closed primaries are criticized because they "take away a freedom of choice Mississippians currently enjoy," State Sen. David Blount, a Democrat, said.

Mississippi joins 15 other states with open primaries. Seven states have a combination of both with semi-closed primaries, and the remaining six states have different primary systems between parties.

Ten states have party-elected systems, meaning each party determines how open the primary is, while the rest of the states' primaries are state-mandated.

Some members of Hosemann's panel expressed interest in the top-two system Louisiana has, but Cole said a number of less intrusive election changes could solve the problems seen in the recent Senate race, as opposed to a complete overhaul. Nosef agreed with the sentiment.

"It's not as much what system that we have as it is ... there's no way to enforce our law," Nosef said. "Being able to enforce whatever the rules are is something that I think would be nice because from a voter standpoint that's unbelievably frustrating."

One unenforceable election law in Mississippi is one that says that a voter cannot "participate in any primary election unless he intends to support the nominations made in the primary in which he participates."

Assistant Secretary of State for Elections Kim Turner mentioned the impossibility of enforcing the law.

When asked why we have an unenforceable statute in the first place, Hosemann directed the question to the Legislature, saying they are responsible for creating the law.

Instead of reforming the entire system, Cole suggested changing the law to make runoffs less frequent. If the Senate race had not required a runoff, Cole does not believe the state would be having a discussion about election reform.

Thomas Carey, the U.S. Senate Republican candidate whose name no one can remember, paid $300 to enter into the election and knock the race into a runoff. If the qualifying fees were $3,000 instead, Carey—who many see as a frivolous candidate—would have not been able to essentially muddy up the election, Cole argues. He says those fees should be multiplied by 10 in each election.

While Rep. Cecil Brown, a Jackson Democrat, said he is in favor of smaller changes, he does not believe in increasing the qualifying fees to prevent someone from running.

"The fees should be reasonable. It shouldn't be something that would cause somebody to not be able to qualify," Brown said in an interview.

In addition to higher qualifying fees, Cole says the threshold for the percentage of votes the leading candidate gets to prevent the race from going into a runoff should be lowered to 45 percent rather than 50 percent as it is now.

"I don't think there are a lot of negative consequences associated with those changes," Cole said of laws that would prevent runoffs.

Other implementations include early voting, which allows all residents to go to a planned location to vote before Election Day, and online registration, which is traditionally not popular with Republicans. Hosemann said online voter registration is in the works.

Blount said that since Mississippi now has voter ID requirements, election law should also allow for same-day registration at the polls. None of the proposed reforms, however, address the most dramatic complaint from the McDaniel camp: vote buying.

When it comes to complaints from the Tea Partiers of vote buying by the Cochran campaign, nearly every neutral politician, Republican or Democratic, seems to say the same thing: "I don't have any reason to believe that happened," Brown said.

"If that was a problem, they just need to be prosecuted," Brown said. "Any law can be broken. You just have to catch them."

Get out the vote, or GOTV, efforts—canvassing, passing out flyers and going door-to-door—are legal and have always been a major element of political campaigning. But when someone crosses the line by promising a voter something of value for their vote, they've broken the law.

The lack of transparency in the exchange of money in political campaigning, however, is a federal problem. Cole believes the financial reporting requirements must be stricter, but the Mississippi Legislature can only improve those laws on the state level and in state elections.

Super PACs like the recently created All Citizens for Mississippi, Cole said, should have to report their expenses with the FEC within 24 hours. The PAC, run by New Horizon Church International Bishop Ronnie Crudup, has until mid-October to file their completed and amended reports for expenditures in July. Cole said they shouldn't have that much time, which federal election law provides.

One thing that could have prevented the problems with voter irregularity and alleged crossover votes in the Senate race is simply better poll-worker training.

The regulation of crossover voting in a runoff, Cole said, is "left up to the discretion of poll workers."

Hard-copy poll books are used to check voters in at the polls. In the case of a runoff, the party's poll books are to be swapped so poll workers know if a voter voted in the opposite party's primary in the initial election. If he or she did, the poll workers are then supposed to prohibit the person from voting.

While the McDaniel camp complained of crossover votes, their evidence included a vast number of votes they determined were "irregular" due to strange markings in the poll books. Cole said this indicates that the training of poll workers needs improvement.

But no matter which election processes Mississippians deem most effective, the importance of democracy remains. Lynn Evans from Common Cause Mississippi worries that laws like voter ID requirements, as well as the belief that people who voted in the U.S. Senate Republican primary should not have, contributes to the disintegration of voter rights in the state.

"We seem to have sort of leftovers in our subconscious from the old days of Jim Crow that voting is not a right, it's a privilege, and that only certain people should be able to vote," Evans said. "It seems to me what we should be doing is looking to remove obstacles to people voting."

Evans said the current conversation—which involves closing primaries and requiring voter ID—is one that asks: How can we restrict certain people from voting?

"That to me is the wrong conversation. That was supposed to have been settled," Evans said.