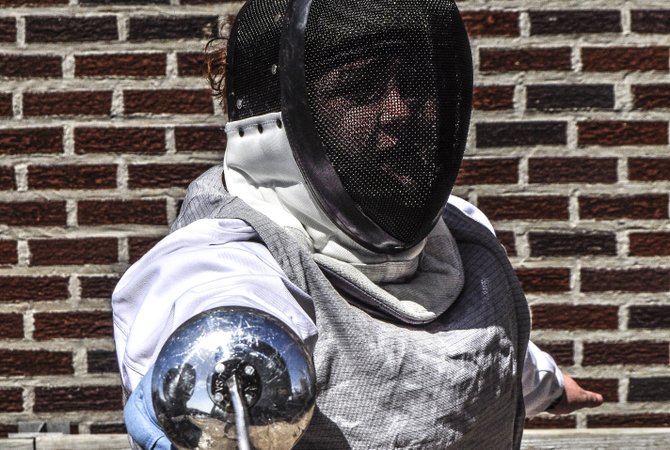 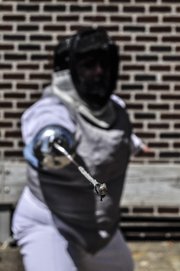 The problem with a regular gym is that, besides classes, it doesn't necessarily provide a fun, competitive way to exercise. Sure, you can pretend that you and your spin-class compatriots are in the Tour de France, or try to race someone on the indoor track, but it's just not as fun as finding unconventional ways to exercise.

Some may not actually be that great of a workout, but exercise avenues like fencing and kickboxing allow you to have fun while doing something active. And let's be honest: Almost anything that gets you moving is better than sitting on the couch watching TV.

While it's not cardio-oriented (though sometimes it can be), it's a test of your character. To succeed in a bout (competition between two fencers), you have to be an excellent judge of character, and have a calculating mind, quick feet and reflexes, and you have to discern when to wait your opponent out, or move in and score. It's a test of your flexibility, especially if you're short like me.

It sounds hard, right? At first, it can be. It's like learning to walk, and if you're an adult, it's even more difficult because you're essentially letting go of 20 or so years of knowledge and retraining your body. 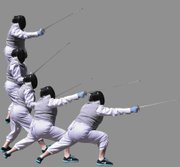 Fencing isn’t an easy sport to learn—as is evident in this image series, since a fencer’s non-weapon arm is supposed to be straight during a lunge—but it’s fun to do.

Target area—Where you can hit. For foil, this is the upper body, including the electric bib on modern masks and excluding the arms and the rest of the mask. For sabre, it's all of the upper body, and for epee, the entire body is a target.

Parry and riposte—When a person comes at you with an attack, you move the blade and hit them.

Weapon arm—Whatever arm you hold your weapon in. This depends on whether you're right or left-handed.

Foil weapon—Long and tapered at the end. It has an electrified tip and a convex bell guard to protect your hand.

Epee weapon—It's similar to the foil in that the tip is also electrified, but it has a separate cord. Epees have a thicker blade than a foil, and the bell guard tapers down to protect your hand, as it's also target area.

Sabre weapon—The entire blade is electrified due to any part of it being able to score. Its blade is triangular. The bell guard is connected to the bottom of the grip (the part you hold) and covers your whole hand. It uses the same body cord as a foil weapon.

En garde—The starting stance for fencing. Your front foot faces front, and your back foot is at a 90-degree angle. When you hold your weapon, hold it at a 45-degree angle to protect target area. Go back to this after attacks.

What Do You Need?

Fencing mask—The thing with the holes that makes you look like a beekeeper.

Glove—Goes on your weapon hand.

Lame—(pronounced luh may) What allows you to score in foil.

Jacket—Long sleeve with a high collar.

Knickers—Cropped pants with suspenders and a high waist for protection.

Mississippi Fencing Club, which meets at Baptist Healthplex in Jackson (address), has jackets, lames and non-electric weapons, but if this is a sport you see yourself continuing, I would suggest investing in gear.

If you like pushing and shoving, roller derby is the sport for you.

I saw roller derby for the first time a couple of weeks ago. It was Magnolia Roller Vixens' last home tournament of the season, the theme? Harry Potter. When I heard that, I did everything I could to attend. After spending the day chasing my niece and nephew around, I almost didn't go. But once I got to my track-side seat, I wasn't sorry in the slightest that I forfeited precious sleep for a roller-derby bout. Two words describe the sport: pushing and shoving. Every bout has lots of both.

What do you need?

Quad skates—Like the ones we used at the skating rink.

Jersey—The coolest part is that you pick your name and number.

How does it work?

Bouts are roller-derby tournaments. Each consists of two 30-minute periods broken up into jams that last up to two minutes with 30 seconds between each jam. In each of these, the referee blows a whistle and the bout is on. When the pack, excluding the jammers, is about  20 feet from the starting line, the ref blows the whistle again and then the jammers, the point scorers, join the battle.

Pivots, who wear a stripe on their helmets, block and call the plays, and blockers block. Under certain circumstances, a pivot can become a jammer. And the blockers try to keep the opposing jammer from getting into the lead.

All of the players have to push and shove their way through the opposing team to aid the jammer in getting to  the front. The jammer has to be quick and tough, and the pivot and blockers have to be strong and unafraid to push people around.

Contact zones are your torso down to upper thighs (above the knee) and include the upper arms (above the elbow). You can't grab, pull or trip people, use your elbows above the shoulder or block with your arm extended or you'll get a penalty.

Training for roller derby, you learn skills such as starting and stopping, skating fast, getting around obstacles and other players, and falling properly. It's a tough sport, but if pushing and shoving is your bread and butter, this might just be the sport for you. 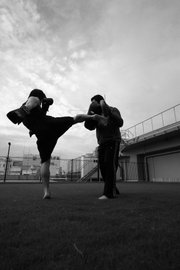 Kickboxing is a great exercise for cardio and fitness.

Compared to fencing and roller derby, kickboxing is quite docile. It's not a team sport, and if you do it as a cardio group class, you won't be kicking or punching anyone.

What do you need?

Tennis shoes—You want to be comfortable.

Workout clothes—Whatever you like to workout in, though I wouldn't recommend Jackson Free Press' bear suit.

How does it work?

It's pretty simple. You either find a place that does real kickboxing or go to a class. Keep in mind that a group class, while rigorous, may not be the kick-boxing you've seen on TV. You do some of the same moves, but they're set to music, and you don't have an opponent. But that doesn't mean you can't learn from the class.

Make punches and kicks lightning fast to stun your opponent (even if that's air). Classes may include other cardio moves such as marching in place or jumping jacks.

Here are some of the things you may learn in either setting:

Boxing stance—Feet are shoulder-width apart. The front foot is at a 45-degree angle, turning a in. The back foot should be at a 90-degree angle. Your hands are level with your cheeks and in a fist. Your nondominant hand stays near your face as protection, and your dominant hand is in front.

Orthodox stance—If you're right-handed, put your left leg and hand in front

Jab—Straight punch to your opponent or the air.

Right cross—For an orthodox kickboxer, after landing a jab, turn your right side and punch with your right arm.

Uppercut—Turn your non-dominant side and punch up.

Front kick—Kick with your front leg.

Roundhouse kick—Turn, bring your knee up and kick with your back leg.

Side kick—Turn to the side and kick.

To get fit, you don't have to stick to conventional methods. If you're like me and get bored in a gym, try one of these sports, and you might find yourself a healthier, fitter person without having to make yourself do something.