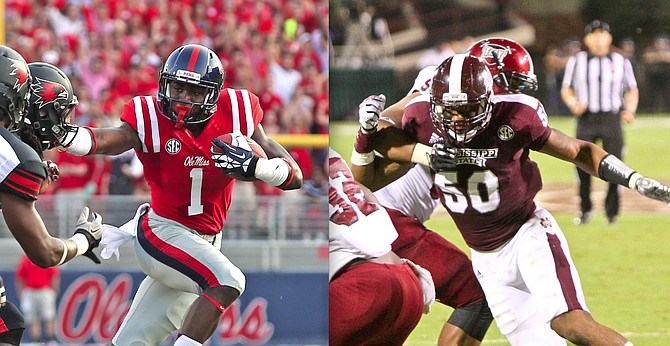 Things have changed quite a bit over the past year.

Starting with that overtime victory over the Razorbacks, No. 1 Mississippi State (7-0, 4-0 Southeastern Conference, No. 1 CFP) has won 10 straight games and is now among the front-runners to win a national title.

While the Bulldogs are rolling, the Razorbacks are still struggling. Arkansas (4-4, 0-4) has lost 16 straight conference games, dating back to 2012. The teams meet again on Saturday at Davis Wade Stadium.

Arkansas right tackle Brey Cook said Mississippi State's rise could be used as a model for what the Razorbacks hope to accomplish in the near future.

"Just goes to show the power of our conference," Cook said. "Anybody can do anything on any given weekend, and we're excited to go out there and play a good football team on Saturday."

Four of the SEC's top seven rushers will be on the field — Mississippi State's Dak Prescott and Josh Robinson and Arkansas' Jonathan Williams and Alex Collins.

It's no secret both teams love to move the ball on the ground. Robinson had a career-high 198 yards rushing last weekend in Mississippi State's 45-31 victory over Kentucky.

Arkansas counters with a mammoth offensive line that has no starter under 314 pounds. Mississippi State coach Dan Mullen compared Arkansas' ground-based approached to LSU, but also said that every school has a slightly different formula for success.

"We play a wide variety of teams in the SEC, and everyone is different," Mullen said. "Even all of the spread teams are a little bit different from each other. We will be a little different on defense than we were last week."

Things to watch on Saturday when No. 1 Mississippi State hosts Arkansas:

HEALTHY PRESCOTT: Mississippi State quarterback Dak Prescott took some hits in the victory over Kentucky last weekend and was wearing a walking boot on his left foot at times during the week. The junior says he's healthy and hasn't been limited during practice, but the Razorbacks will likely try to test his mobility early.

THE DIFFERENCE A YEAR MAKES: About this time last season, Mississippi State came into its game against Arkansas as a 4-6 football team with fading hopes of even becoming bowl eligible. Since then, the Bulldogs have won 10 straight games and are the No. 1 team in the country.

ON THE OTHER HAND: Arkansas comes into Saturday's game mired in a 16-game conference losing streak that dates back to 2012. The Razorbacks have played a lot of competitive games — most notably against Alabama and Texas A&M — but haven't figured out a way to come through with an SEC victory. Knocking off the Bulldogs in Starkville could certainly be a program changer.

RAZORBACK REINFORCEMENTS: Arkansas should get a little extra help on the defensive end to help try and stop Mississippi State. Linebacker Brooks Ellis and cornerback Henre' Toliver are expected to return this week after missing time with injuries. Toliver sat out last week with a sore back, while Ellis missed the last two games with a bone bruise on his knee.

BORN TO RUN: Four out of the league's top seven rushers will be on the field in Starkville on Saturday, including Mississippi State's Prescott and Josh Robinson and Arkansas' Jonathan Williams and Alex Collins. Robinson ran for 198 yards against Kentucky last weekend, which was a career high. Williams also set a career high last week with 153 yards rushing against UAB.

Meanwhile, Auburn and Mississippi spent the week dismissing their standing in the first College Football Playoff rankings as mostly irrelevant.

One of them will no longer enjoy the relative comfort of a win-and-in mindset after this weekend. The fourth-ranked Tigers and seventh-ranked Rebels, both among the initial top four teams, meet Saturday night in what could amount to the first elimination round of the playoffs.

It won't likely be the last in the competitive Southeastern Conference Western Division.

"We're focused solely really on one ranking and that would be on Dec. 7," said Ole Miss coach Hugh Freeze, referring to the final rankings that set up the four-team field. "That's the one that really matters."

This game really matters to both teams.

"I'm viewing this Saturday as, this is the biggest game on the schedule," Malzahn said. "We've got to go there, we've got to play well to win, and that's the only thing on our mind. I'm not looking ahead, this or that. We're going to Ole Miss. We're trying to win a game."

The Rebels are coming off their first loss, 10-7 to No. 16 LSU. They still sport the nation's top scoring defense.

The Tigers are averaging 39.3 points a game and have the SEC's top running game, fueled by quarterback Nick Marshall and tailback Cameron Artis-Payne.

This will be the biggest test both units have faced.

Malzahn says this is the best Ole Miss defense he has faced.

Here are some things to watch in the Auburn-Ole Miss game:

BO BOUNCING BACK: Rebels quarterback Bo Wallace had one of his worst games of the season in the loss to LSU, including an interception in the final seconds. He was 14-of-33 passing for 176 yards but expressed the hope for a less conservative gameplan this week that leds to fewer third-and-long situations.

FREEZE VS. MALZAHN: The two former Arkansas State coaches both typically employ a no-huddle offense, though Freeze has pulled back the reins somewhat with his defense performing so well. The Tigers are more run-oriented than the Rebels, too. But some of the principles are the same, tailored to their respective strengths. "Gus and I could be identical if we chose to within the game plan," Freeze said. "We can also look quite different probably. We're extremely similar in run game. Pass game, probably more different than the run game. We could make them look very, very similar if we chose to."

PROTECT THE FOOTBALL: It's a huge challenge facing any team going against Ole Miss. The Rebels lead the nation with 17 interceptions, including eight from cornerback Senquez Golson. They've scored four defensive touchdowns. Auburn's Marshall has only thrown three interceptions, but the offense opened its last road game with turnovers on its first two plays against No. 1 Mississippi State. The Tigers defense has 13 interceptions.

WE'RE NO. 1: The Rebels' Laquon Treadwell and Tigers' D'haquille Williams are big, physical receivers and two of the SEC's best. Both also sport No. 1, and their on-the-field numbers are similar. Treadwell has 529 yards and four touchdowns while Williams has produced 527 yards and five TDs.

DEFENSIVE MATCHUP: The Rebels got pounded for 264 rushing yards against LSU. The defenders are more in their comfort zone going against an offense that can so closely resemble their own.

"I think that our defense is probably more designed for the Auburn offense," Golson said. "It's more familiar with us especially running against our offense all the time. More comfortable for us, definitely."