The Gathering of the Art | Jackson Free Press | Jackson, MS

The Gathering of the Art 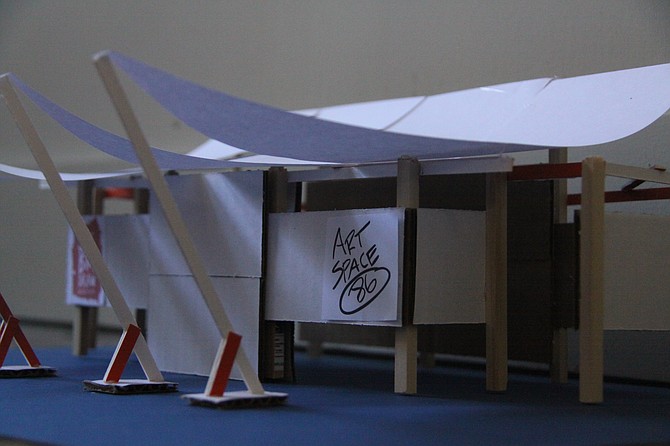 The name comes from the restaurant term "86ed," which means something has been taken away or customers have been asked to leave. The phrase has many possible origins, from the term used for materials to be disposed of on a warship—AT-6—to the prohibition era when police would call ahead to tell the bartender at Chumley's on 86 Bedford St. in New York City that he needed to "86" his customers before police raided the place. In the case of Art Space 86, the term references the transient nature of the event—artists show their work for one day, and then the gallery is gone until Partridge and West plan another.

West and Partridge have been friends since their undergraduate days at Mississippi College. West got the idea for Art Space 86 from similar galleries he saw in Baton Rouge, La.

"(We've) had many, many conversations about art and what art can do for communities, and how we want to be part of the inspiration to allow people to see the excitement and the power that art can have, and also (how) to give artists opportunities to show work," Partridge says. "We noticed around Jackson that there were many more artists than there were places to show art. We felt like this was a helpful thing that we could do community-wise to give another opportunity for artists to show their work."

The first Art Space 86 premiered during Fondren Unwrapped Nov. 21, 2013. Since then, installments have featured artists such as painter Sam Biebers and Kevin Harrington, a member of the Craftsmen's Guild of Mississippi who crafts pieces from downed trees. For this year's Town Creek Arts Festival on Nov. 1, Partridge and West will partner with one of Jackson's most prolific art providers—the Mississippi Museum of Art (380 S. Lamar St.) for its fifth pop-up gallery. In past years, Julian Rankin, MMA's marketing director, says that the museum has organized artists and vendors to exhibit their work at the festival. This year, it's leaving that task to Art Space 86.

"(Partridge and West) are actually constructing a gallery and walls and all this stuff in the middle of the BankPlus Green, which is the big, open area of the Art Garden," Rankin says. "It's a first for The Art Garden to have an outdoor gallery ... of that scale and magnitude and that ambition." A model shows the Art Space 86 outdoor gallery as a tented exhibit with art lining it. Each pop-up gallery has an $86 wall, which Partridge says gives everyone the ability to own their own art, regardless of budget. The outside front space is designated for The Big Draw Mississippi community mural. The Big Draw started in England in 2000. Since then, 20 other countries have adapted the event, including several U.S. states. That list now includes Mississippi.

Town Creek began in 2011 to celebrate the opening of the Art Garden. This year marks the festival's fourth installment and The Art Garden's third complete year of life.

Many events happen in the garden, such as Josh Hailey's recent premier of Photamerica, but Rankin says Town Creek is special, though, because it essentially serves as a birthday party for the garden.

"More than that, it's a celebration of Jackson, and (I think) it being downtown is important because in the city center is a green space that wasn't there before. It used to be a parking lot," Rankin says. "It sort of embraces all those themes of renewal and development and the power of the arts to change communities and cities for the better."

Some of the artists featured in Art Space 86 include Felandus Thames and Susan Russell. Four of the artists—Carolyn Busenlener, Shawn Lee Dickey, Lou Haney and Don Norris—are in the Mississippi Invitational, which premiers that day, as well.

Though the gallery is a large part of the festival, the museum will have other activities all day. At 9 a.m., kids can attend a breakfast at The Palette Cafe by Viking, which is a celebration of the museum exhibit "Spanish Sojourns: Robert Henri and the Spirit of Spain." Along with breakfast, kids will hear a reading from "The Story of Ferdinand" and will get to meet Ferdinand the bull. From 10 a.m. to 2 p.m., kids can participate in hands-on educational activities from the Mississippi Children's Museum, the Mississippi Agriculture and Forestry Museum, and the Jackson Zoo. The event will also include performances from Belhaven Dance, a Sigma Beta Club of Jackson step performance, and the Fondren Guitars Rock Band will play. The Mississippi-Made Concert will feature musical performances from visual artists, including Wyatt Waters, and bands such as Eric Stracener and the Frustrations. "In addition to being family fun and (having) different components for all ages, it's ... a celebration of Mississippi creativity in all kinds of forms," Rankin says.

Town Creek Arts Festival begins Nov. 1 at 9 a.m., with the children's breakfast at The Palette Cafe by Viking at the Mississippi Museum of Art (380 S. Lamar St.). The event is free (the kids' breakfast is $15) to the public. The 2014 Mississippi Invitational is $12 for adults, $10 for seniors, $6 for students and free for children ages 5 and under. The kid's breakfast at The Palette Cafe is $15. For more information, visit msmuseumart.org or call 601-960-1515. Find Art Space 86 on Facebook.