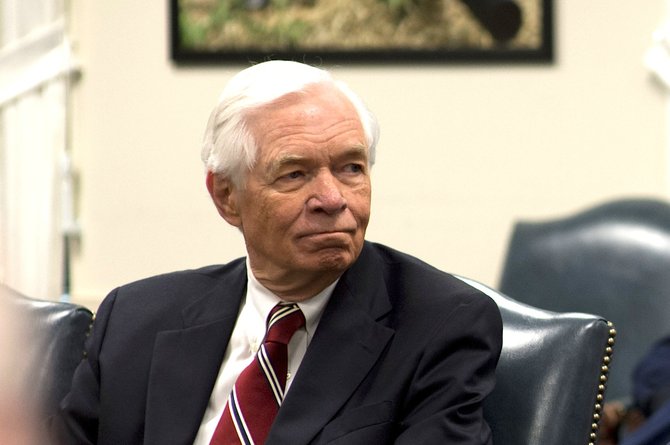 Republican Sen. Thad Cochran told black voters Thursday that when he first ran for Congress in 1972, Mississippi was in a period of fear and uncertainty because race relations were changing.

JACKSON, Miss. (AP) — Republican Sen. Thad Cochran told black voters Thursday that when he first ran for Congress in 1972, Mississippi was in a period of fear and uncertainty because race relations were changing.

He said the gubernatorial election of 1971 was the first time a candidate for a major office in the state, Democrat Bill Waller, made an effort to appeal to black voters who were asserting their constitutional right to vote.

"I can remember this — you were denied that right, and that was wrong," Cochran said. "And we are working more successfully than ever to break down those barriers and prejudices and open up our society to participation by everybody. And that's my goal as I continue to serve in Washington."

The senator spoke to about 50 people at a downtown Jackson campaign event sponsored by All Citizens of Mississippi, a political action committee that has bought ads promoting him to black voters.

The six-term senator defeated a tea party challenger, state Sen. Chris McDaniel, in the June 24 Republican primary runoff. African-Americans were considered crucial to Cochran's winning the nomination because turnout increased in many majority-black precincts between the June 3 primary and the runoff three weeks later. Some McDaniel supporters accused Cochran of race-baiting because of ads that said McDaniel would cut federal spending.

"There's nothing new they'd learn about me. They know me," Cochran said of voters. "He wants me to help draw a crowd. I'm not going to do it."

Childers was elected to Congress from north Mississippi's 1st District in mid-2008 and was unseated by a Republican in 2010. He has made several requests for Cochran to debate at least once in each of the four congressional districts, and he has criticized Cochran for voting against increasing the minimum wage and requiring equal pay for women and men who do the same jobs.

"This is not about being unappreciative or ungrateful to the senior senator. This is about the next six years and not the last 42," Childers said during a recent campaign trip in south Mississippi. "This is about the future, not the past."

The Reform Party's Shawn O'Hara, who has run unsuccessfully for several offices in the past two decades, is also on the November ballot for Senate.