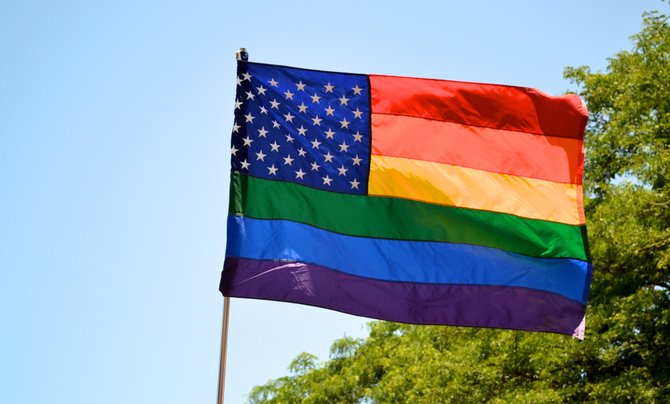 On Monday, the Supreme Court refused to take up appeals from five states seeking to preserve their gay marriage bans. Six other states—Colorado, Kansas, North Carolina, South Carolina, West Virginia and Wyoming—would be bound by those same appellate rulings that were put on hold.

WICHITA, Kan. (AP) — Conservative officials in some of the six states where Supreme Court action this week likely cleared the way for same-sex weddings say they won't issue marriage licenses to gay couples until their hands are forced. Now, gay rights advocates are preparing to do just that.

On Monday, the Supreme Court refused to take up appeals from five states seeking to preserve their bans. Six other states—Colorado, Kansas, North Carolina, South Carolina, West Virginia and Wyoming—would be bound by those same appellate rulings that were put on hold.

In Kansas, Attorney General Derek Schmidt noted that to date no court has squarely decided whether the Kansas Constitution's prohibition on same-sex marriage is invalid, and he said that the state will deal with any litigation as it comes. Republican Gov. Sam Brownback, fighting a close re-election battle, has said the state should defend the ban.

"The people have spoken on this," Brownback said. "I don't know how much more you can bolster it than to have a vote of the people to put in the constitution that marriage is the union of a man and a woman."

Wyoming Gov. Matt Mead has said that the state's attorney general will continue defending its constitution defining marriage between a man and a woman and that the U.S. Supreme Court refusal to hear appeals of gay marriage bans had no impact on a state case contesting that definition.

South Carolina's attorney general said if a court specifically rules against its gay marriage ban, he will then decide how to proceed.

Meanwhile, in liberal Colorado, which is covered by the same 10th U.S. Circuit Court of Appeals as Kansas, gay marriage is now officially legal. Attorney General John Suthers said Tuesday that all of the state's counties must issue the licenses.

In Kansas, where the state constitution specifically bans same-sex marriages, the ACLU affiliate spent Tuesday reaching out to lawyers to join its legal team for a federal challenge that would seek an immediate court order blocking the ban, given the precedent in the 10th Circuit. It could be filed as soon as next week, said Doug Bonney, legal director of the ACLU of Kansas and Western Missouri.

In Kansas' Reno County, Julia and Regina Johnson were given the necessary paperwork Tuesday for a marriage license before a clerk called them hours later to say their application was denied.

Reno County Chief Judge Patricia Macke Dick said she had no choice because there is no case that specifically overturns the Kansas same-sex marriage ban.

The only gay marriage-related lawsuit now in the Kansas courts is a narrow case filed by two couples who married in other states and sued Kansas over tax treatment. Their case is being heard next month.

In Wyoming, three same-sex couples and the gay rights group Wyoming Equality have a lawsuit pending contesting the state's definition of marriage as solely between a man and woman. It is set for a hearing in December. An attorney for Wyoming Equality took issue with Mead's comment that the Supreme Court action had no impact on the state case.

"At the end of the day, the 10th Circuit's ruling is now the law in Wyoming, which means that same-sex couples now have the fundamental right to get married in Wyoming and the governor and the AG's office are trying to interfere with that right," said attorney James Lyman.

And by Tuesday afternoon, four Wyoming couples had filed a federal lawsuit against the governor, Laramie County Clerk Debbye Lathrop and other state officials seeking the immediate right to marry.

South Carolina's Attorney General Alan Wilson says no ruling has been made in a lawsuit by a same-sex couple legally married in Washington, D.C., who live in South Carolina, and that he was required to keep defending the state until a judge rules that the 4th U.S. Circuit Court of Appeals ruling applies to the South Carolina lawsuit.

"When those options are gone, we will have a discussion on how the state moves forward," Wilson said Tuesday.

It astounds me that the Kansas AG hauls out that line, "the people have spoken." Well, yes, back in 2005 they did speak. Since then, things have changed. The latest polls:

Okay, so get with the program and stop wasting tax-payer's money on battles long lost.