Prescott and Bulldogs Make a State-ment in Starkville 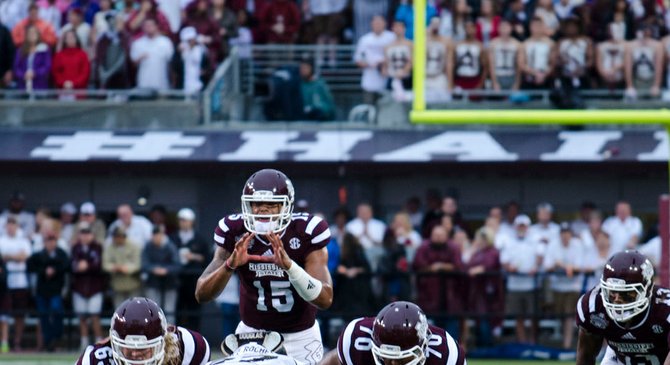 STARKVILLE, Miss. (AP) — Dak Prescott took the snap and saw nothing but empty field between him and the goal line. Instead of handing off the ball, the Mississippi State quarterback decided to take care of it himself, doing just a little bit of a high step as he went into the end zone.

With about 10 minutes left, it was over for Texas A&M.

The first of two on Saturday as No. 11 Mississippi followed with a 23-17 victory against No. 3 Alabama in Oxford.

The Bulldogs (5-0, 2-0 Southeastern Conference) jumped out to a 28-7 lead in the first half and never let Kenny Hill and the high-scoring Aggies (5-1, 2-1) get close enough to threaten the lead — or quiet the Bulldogs fans and their clanging cowbells at Davis Wade Stadium.

Hill threw for 365 yards and four touchdowns, but was picked off three times by linebacker Richie Brown, who matched a school record.

"They just beat us," Hill said. "They had a great game plan and just stomped us. Credit them."

Prescott first plowed into the end zone for two short TDs and pretty much sealed the deal with an 11-yard draw to make it 48-17 in the fourth quarter.

"Right there was kind of the nail in the coffin," Prescott said.

Prescott entered this season as a fringe Heisman Trophy candidate, but is way more than that now.

"He's going to get a lot more attention now with his performance," Bulldogs coach Dan Mullen said. "But as I've told everyone, that's what we expect from him."

Prescott wears the same No. 15 Tim Tebow did at Florida, runs the same offense and plays for the same coach — Mullen who was offensive coordinator for the Gators. Prescott even got to hang with Tebow some this weekend. The 2007 Heisman winner was in town with the SEC Network and interviewed Prescott.

"I asked for No. 15 when I first came to Mississippi State because of Tim Tebow," Prescott said. "Our games are kind of similar, but I'm a different player. I have my own type of game, but I want to mimic him in a way."

Mississippi State has only won the SEC West once and spent far more time near the bottom of the division than the top over the years, but Mullen has an experienced and talented team around a spectacular quarterback in his fifth season in Starkville.

The Bulldogs showed beating LSU for the first time in 15 years a couple weeks ago was no fluke. For the first time, Mississippi State has beaten two top-10 teams in the same season.

"Sweet!" Mullen said when he found out about that.

Hail State, indeed. When the new AP Top 25 comes out Sunday, Mississippi State will likely be in the top 10 for the first time since 1999.

A&M scored on its first offensive series, zipping down the field with ease to make it 7-0 on a 13-yard pass from Hill to Josh Reynolds.

Mississippi State's response was the game's next four touchdowns.

The clanging cowbells might have been loud enough to hear 90 miles up the road in Oxford, where Alabama and Ole Miss were the second game of the Magnolia State's monster twin bill.

It had been almost 28 years since Davis Wade Stadium in Starkville was the site of a top-15 matchup. That one didn't go too well for the Bulldogs (Auburn 35-6). This time the partying that started pre-dawn in "Starkvegas" because of the 11 a.m. local kickoff never stopped.

"We feed off that," said center Ben Beckwith, who moved over from his usual left guard spot to replace the suspended Dillon Day. "I know a bunch of them were probably a little woozy after last night."

Prescott's 2-yard bull rush in the third quarter made it 34-10. A&M blocked the point after kick and then responded with a touchdown by Speedy Noil to cut the lead to 34-17 with 3:33 left in the third.

Just when it looked as if A&M might have some life, Mississippi State unleashed another Dak attack.

Prescott zipped a deep out toward the sideline for Fred Brown, who slipped a tackler and went 51 yards for the score to make it 41-7.

There's half a season to play and a bunch of huge games still to play in the SEC West, starting next week when Auburn comes to Starkville.

But for now Mississippi State is a contender, Prescott is a Heisman candidate and the college football world is about to hear a lot more cowbell.