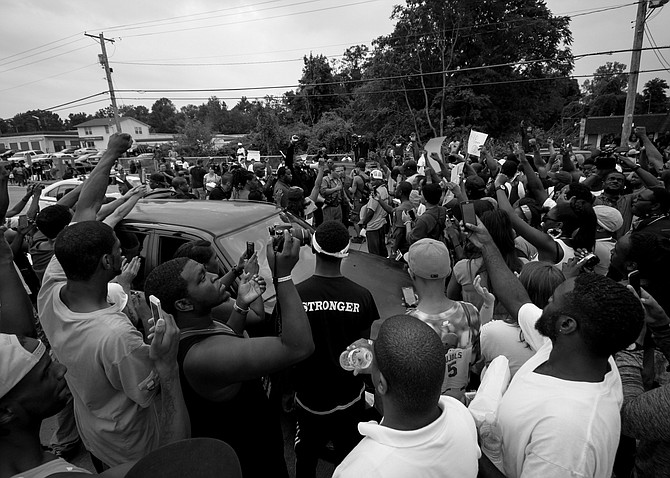 People protesting the Ferguson, Missouri, grand jury decision took to the streets in cities across the U.S. for a second day Tuesday, showing that the racially charged case has inflamed tensions thousands of miles from the predominantly black St. Louis suburb.

Brooks wrote on his Facebook page that he landed in New York on the night the grand jury's decision was announced "to the news of the civil unrest that was going on in our nation. To spend the day promoting our stuff like nothing was wrong seemed distasteful to me."

Singer Garth Brooks has canceled a Thanksgiving appearance on NBC's "Tonight" show because he said it "seemed distasteful" given the reaction to the decision not to prosecute Ferguson, Missouri, police officer Darren Wilson for the shooting of Michael Brown this summer.

NBC on Wednesday confirmed the postponement, saying Brooks was being replaced on the show by Whoopi Goldberg and Tom Colicchio.

Brooks wrote on his Facebook page that he landed in New York on the night the grand jury's decision was announced "to the news of the civil unrest that was going on in our nation. To spend the day promoting our stuff like nothing was wrong seemed distasteful to me."

He offered to reschedule. There was no immediate comment from his spokesperson about what other appearances were canceled.

Meanwhile, people protesting the Ferguson, Missouri, grand jury decision took to the streets in cities across the U.S. for a second day Tuesday, showing that the racially charged case has inflamed tensions thousands of miles from the predominantly black St. Louis suburb.

For many, the shooting of 18-year-old Michael Brown by Officer Darren Wilson recalled other troubling encounters with law enforcement. The refrain "hands up, don't shoot" became a rallying cry over police killings nationwide.

A look at some of Tuesday's demonstrations:

Thousands of people marched for a second night in Manhattan, gathering in Union Square before splitting into several smaller groups, chanting "No justice, No peace." Some held signs saying "Jail killer cops" and "Justice for Mike Brown."

One group marched uptown to Times Square, meandering between lanes of traffic as police followed. The protesters, who seemed to grow in number as the night wore on, disrupted traffic on the FDR Drive and congregated at the entrances to the Williamsburg and Manhattan bridges and the Queens Midtown Tunnel.

"As long as they remain nonviolent, and as long as they don't engage in issues that cause fear or create vandalism, we will work with them to allow them to demonstrate," he said.

Protesters flooded the U.S. 101 freeway Tuesday night, carrying barricades that they laid across lanes and bringing traffic to a halt.

Within a few minutes Highway Patrol and LAPD officers chased the few dozen protesters off the freeway and corralled them on an overpass, where one of the barricades was thrown on to the freeway below. There were no immediate reports of any arrests.

The protesters had broken away from a larger, primarily peaceful group of hundreds who had marched for miles through city streets since mid-afternoon, converging on police headquarters.

In Oakland, a group of protesters is vandalizing police cars and businesses in downtown Oakland, smashing windows at car dealerships, restaurants, and convenience stores on a second night of protests.

The crowd briefly shut down two major freeways, and set several trash bins on fire across a major street before police in riot helmets forced them to disperse.

A rally in Minneapolis turned scary when a car struck a protester and then burst through a pack of others who surrounded it. A woman suffered minor injuries.

Several hundred people had gathered Tuesday afternoon near the 3rd Precinct police outpost to show solidarity with Brown. The driver called police soon after to report the incident, and police spokesman John Elder said the incident was under investigation.

Several hundred people marched down a freeway ramp to block rush-hour traffic while protesting the Missouri developments and Saturday's fatal shooting by an officer of 12-year-old Tamir Rice of Cleveland, who had a pellet gun that looked like a real firearm.

"The system wasn't made to protect us," said one of the protesters, 17-year-old Naesha Pierce. "To get justice, the people themselves have to be justice."

Riot police arrested several demonstrators who sat in the middle of Interstate 44 near the Edward Jones Dome. They used pepper spray to disperse the crowd.

Demonstrators also swarmed the steps of the federal courthouse chanting, "You didn't indict! We shall fight!"

Several hundred people from historically black schools Morehouse College and Clark Atlanta University in Georgia held peaceful demonstrations. But as the night wore on, some groups split off and tried to block a freeway, and police said some windows were broken.

Police said 21 people were arrested, mostly for failure to disperse when asked, but one person faces a weapons charge.

In Portland, Oregon, a rally drew about 1,000 people who listened to speeches then marched through downtown. A splinter group of about 300 people kept going, marching across a Willamette River bridge. Bus and light rail traffic was disrupted, and police used pepper spray and made several arrests.