Analysis: Miss. Tax Cuts Could be Debated in 2015 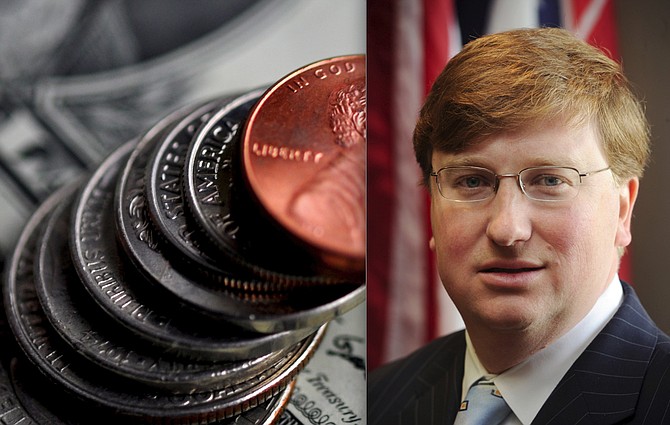 Lt. Gov. Tate Reeves, who is seeking a second term, has said for months that he might propose a tax cut in 2015, but he hasn't provided details.

JACKSON, Miss. (AP) — Mississippi has state elections in 2015, and it's a safe bet that lawmakers will try to endear themselves to voters by debating a tax cut.

Gov. Phil Bryant and Lt. Gov. Tate Reeves are both seeking re-election, and they're already reciting familiar Republican talking points by saying people should keep more of the money they earn.

Any proposal that could reduce revenue will, of course, be met with skepticism by people who say underfunded schools are hurting Mississippi's prospects of emerging from perpetual poverty.

It's too soon to know what kind of tax cuts legislators will consider. They could look at a business-focused break, or at a narrowly focused reduction of income taxes.

"We're looking very closely at the possibility of an income tax cut for working-class families. So we're looking at roughly about a $40,000 income and below," Bryant told reporters last week after Hobnob, a business gathering sponsored by the state chamber of commerce, the Mississippi Economic Council.

The governor, who is seeking a second term in 2015, said he asked the Department of Revenue to check how many people fall into that income bracket and how a tax reduction would affect the state budget.

"If there's a possibility of looking at a segment of the population and putting some money back into their hands, I would like to do that," Bryant said. "Now, people might say, 'Oh, that's only $100.' But when it costs you $50 to fill your pickup truck up, $100 is effective."

Reeves, who's also seeking a second term, has said for months that he might propose a tax cut in 2015, but he hasn't provided details.

Mississippi is spending just over $6 billion in the budget year that started July 1. Agency directors have requested about $1 billion more for the coming year.

"Career politicians say we can't afford a tax cut in the face of these new budget requests, but the mentality assumes we're going to grant these dramatic upticks in spending," Reeves said. "But remember what I told you when I ran for this office: I'm sticking with my conservative principles to get Mississippi's fiscal house in order, which means having the courage to say no."

Politicians of both parties campaign by saying education should be the state's priority, so it's guaranteed that any tax-cut debate will include questions about school funding.

The Mississippi Adequate Education Program, a complex funding formula designed to give schools enough money to meet midlevel academic standards, was put into law in 1997 but has been fully funded only twice — both times during election years.

During the current budget year, MAEP funding fell $257 million short of what the formula specifies. Full funding next year would require a $311.7 million increase. After Hobnob, reporters asked Bryant about the prospect of fully funding MAEP next year and he responded: "I just don't think we're going to be able to do it."

He said the state is putting millions of dollars into specific education programs, such as a two-year teacher pay raise plan and an effort to improve reading skills before children finish third grade.

"We're putting money into education," Bryant said, "but not some formula that not many people understand."

Who loves taxes? But I'm going to be perfectly honest - I do not have an issue with our state income tax rates as much as I do with our ad valorem taxes and our taxes on groceries. I wish we can go the way of Georgia (a Republican ran state) where they eliminated the annual ad valorem tax on vehicles and incorporated a one time title tax - where it comes out when you purchase the vehicle, plus owners have the option of incorporating those fees into the total cost of the car or pay it out of pocket themselves.

Florida has certain grocery items they do not tax - while other items are taxed.

If they want to provide relief in taxes - those are some serious possible alternatives to consider.

I agree with you, Duan. The taxes for a car tag in Jackson are ridiculous, so if more money is being given to education perhaps a larger legislative car tag credit can be given, thus reducing the total yearly price. I doubt that the Legislature would eliminate the sales tax on groceries because in many small communities over 80% of the town's budget comes from the taxes on one grocery store and the mayors would lobby against it. However, lowering the rate or eliminating the rate on certain items (perhaps milk and baby formula) would be appreciated.