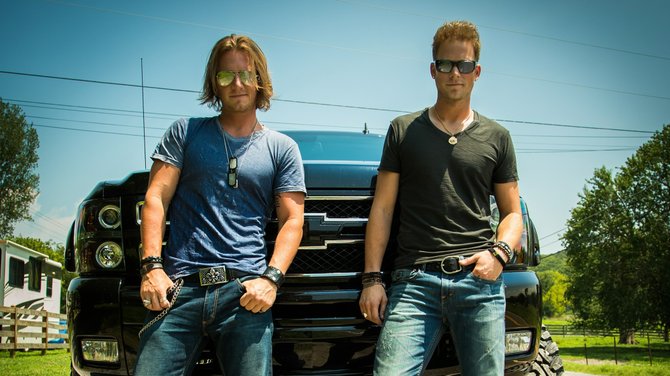 Country duo Florida Georgia Line has made a name for itself with its hip-hop-influenced take on the genre.

It's no secret that the influence of hip-hop—with its rhythmic spoken word vocals, its creative beats and its innovative production styles—is felt in many genres of contemporary music today. Even country music is getting into the act; country act Florida Georgia Line is pushing hip-hop even farther as a new influence.

The duo—Brian Kelley and Tyler Hubbard—fuses hip-hop into several songs on its debut full-length album, "Here's to the Good Times," and it isn't a gimmick.

"We both grew up listening to a lot of rap and hip-hop, and obviously country music, for sure, and rock," Kelley said in a phone interview. "You know, we just don't want to sound like anybody."

Creating a unique sound has been a priority since Kelley and Hubbard formed the duo four years ago after meeting as students at Belmont College in Nashville.

Whatever the duo is doing musically has obviously worked, as Florida Georgia Line is country's breakout act of the past year. But Kelley and Hubbard didn't just step off of the Belmont College campus and into the country-music spotlight.

The two stayed in Nashville, writing songs and playing acoustic duo shows to start before hiring a band. For more than two years, Kelley and Hubbard did a variety of day jobs—from installing bathroom stalls to mowing lawns—to pay the bills.

Slowly, but surely, the group's local audience grew. The duo put out a 2010 debut "Anything Like Me," which included a song, "Black Tears," that Jason Aldean later covered on his latest album, "Night Train." Now, Florida Georgia Line has released three EPs and one full-length album.

"Not much was happening for awhile," Kelley said, looking back on the duo's early struggles. "But you know, I think Tyler and I both knew deep down inside we had something special together that separate we wouldn't be able to do. We're both hard workers, and we said we're going to out-work everybody, and write when people are sleeping, and work when people are sleeping and do whatever it takes to make this thing run."

"The coolest thing about those awards is they are fan voted," Kelley said. "Just the loyalty of our fans and country music fans in general, just people voting day after day. They're committed to what we're doing, and they're committed to our sound. It's a humbling thing to have so many people believing in what Tyler and I are doing, and we owe everything to our fans."

Florida Georgia Line is giving back to fans by continuing to tour, and rocking tracks like "Cruise," "Tip It Back" and "Party People" get crowds fired up.

The energy of the live show is something the two musicians wanted to capture on "Here's to the Good Times." With the help of producer Joey Moi, Kelley feels he and Hubbard got that—and more—on the album.

"The energy is through the roof on our album, for sure," he said. "Everything's pretty rocking. Even if it's mid-tempo or somewhat of a ballad, it's still rocking, and it still sounds huge."

The This Is How We Roll Summer Series Tour comes to Mississippi May 31. Florida Georgia Line, Nelly and Chris Lane perform at 8 p.m. May 31 at Trustmark Park (1 Braves Way, Pearl). Gates open at 7 p.m. Tickets are $46.60 through Ticketmaster. VIP Packages are $199 and include access to a VIP viewing area, an autographed poster, an invitation to the pre-show VIP party and other goodies. Visit floridageorgialine.com.

Country music is like candy- you throw away the rappers

Country music is like candy- you throw away the rappers

As Waylon Jennings would say, " I don't think Hank did it this way".

Musicians must be willing to change with the generations no matter what genre you play. Look at Nelly. I'm sure he has hip hop fans wondering what he is doing getting involved with a country music duo.