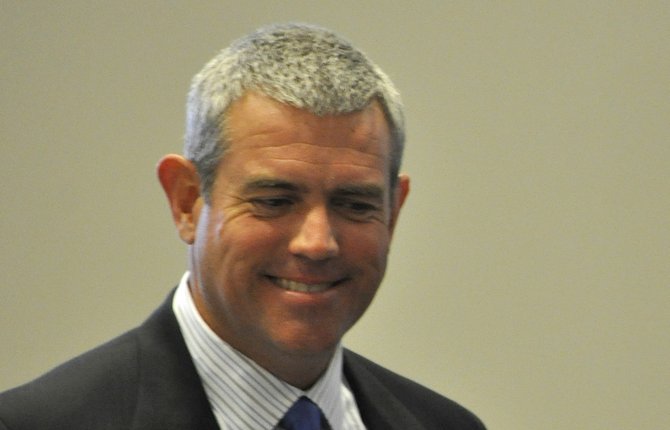 Mississippi politicians like House Speaker Philip Gunn, R-Clinton, have long campaigned by saying they believe marriage should only be between a man and a woman. Photo by Trip Burns.

HRC recently announced that it will spend $8.5 million for its "Project One America" in Mississippi, Alabama and Arkansas, which currently have no laws to prohibit people from being fired from jobs or evicted from housing based on their sexual orientation.

The group's president, Arkansas native Chad Griffin, said HRC is seeking equal rights, not special rights, in the three southern states. He said one goal is to show southerners that LGBT people are already part of their communities, as relatives, friends and co-workers.

"You're just as likely to be gay in Meridian as you are in Manhattan," Griffin said last week during a news conference in the Mississippi Capitol.

Mississippi has had high-profile legal battles in recent years over one school that banned a lesbian student from taking a female date to the prom and another that would not publish a yearbook photo of a lesbian student wearing a tuxedo.

The state has very few openly gay elected officials, and politicians of both major parties have long campaigned by saying they believe marriage should only be between a man and a woman. In 2004, Mississippi voters approved a state constitutional amendment that bans same-sex marriage. It was approved by 86 percent of people voting that day. There appears to be little sentiment among legislative leaders to repeal the amendment.

"I think people in the state have strongly spoken that they believe marriage is one man and one woman," House Speaker Philip Gunn, R-Clinton, said after the HRC news conference.

Mississippi enacted a hate-crimes law in the mid-1990s to allow judges to set enhanced penalties for crimes motivated by racial hatred. The law does not cover sexual orientation, and there has been no momentum to add it.

During their 2014 session, legislators passed and Republican Gov. Phil Bryant signed a bill called the Mississippi Religious Freedom Restoration Act, which becomes law July 1. It says government cannot put a substantial burden on religious practices, without a compelling reason. Although it does not mention gays or lesbians, critics fear it will provide justification for business owners who oppose homosexuality to refuse services to same-sex couples.

Among those pushing for the new law were leaders of the state's Pentecostals and Southern Baptists.

Christian Action Commission is the lobbying group for the Mississippi Baptist Convention, the state's largest denomination. The commission's website says marriage is a lifetime commitment between one man and one woman and "this Church, its pastors, staff and members will not participate in same-sex unions, same-sex 'marriages,' or domestic partnership ceremonies nor shall any of its property or resources be used for such purposes."

In the past few months, governing boards in six Mississippi cities have adopted HRC-backed resolutions that praise diversity and say all people are worthy of respect, including those who are lesbian, gay, bisexual or transgender. The cities are Bay St. Louis, Greenville, Hattiesburg, Magnolia, Oxford and Starkville.

While supporters say the resolutions are an important step to help all residents feel included, it's unclear whether the documents will have much effect on people's day-to-day lives. After the Bay St. Louis vote, City Council member Jeffrey Reed told WLOX-TV that if the resolution there were worded differently, it might not have been adopted unanimously by the seven-member council.

"It was a citizen issue, and based on our economics for the city, we support economics, so no one group stood out," said Reed, who is a minister of a nondenominational church.