Building Bike Commuters One Bike Lane at a Time 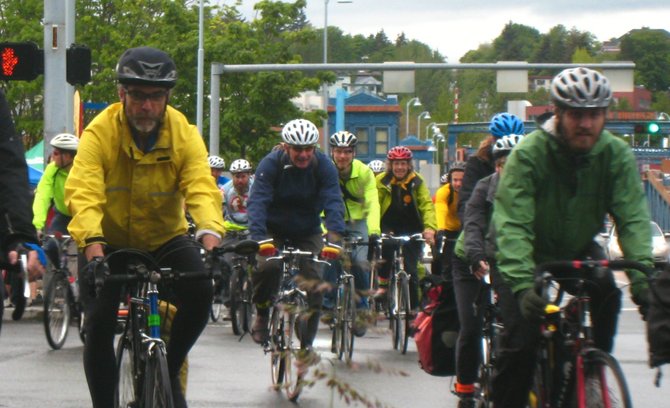 Bike-to-Work Day in Seattle. Washington is spending the most in the nation on projects that incorporate a bike- or pedestrian-friendly element, according to an assessment of state highway spending.

This story appeared on The Daily Climate.

It's that time of year: Bicyclists young and old are lubing chains and dusting off cheap supermarket bikes, top-of-the line Treks and everything in between.

A bike, of course, offers a way to get exercise, reduce your carbon footprint or just have fun. But biking activity, in large part, is driven by the pedaling opportunities available in your community. And just about no matter where you are in the United States, the opportunities available aren't going to change much in the near future, according to a cycling group's analysis.

"States are not planning to spend all that much on biking and walking over the next four years," said Ken McLeod, a legal specialist for Advocacy Advance, a partnership between the League of American Bicyclists and the Alliance for Biking & Walking.

The 112-page report, Lifting the Veil on Bicycle and Pedestrian Spending, also cast a wider net, looking at road projects that included a bike or pedestrian element, such as a bike lane.

Washington, Maryland, Alaska, Massachusetts and New Jersey lead the nation in that category. Washington tops the list, with 27.1 percent of all planned project spending offering something for bikers or pedestrians, according to the 112-page analysis by the cyclists' league.

Five states have earmarked 5 percent or less of their transportation cash for projects with a biking or walking component, with Oklahoma's 1.3 percent at the bottom, the analysis found.

Biking is not all about sunshine and tight shorts—it's increasingly a serious mode of transportation. The number of bike commuters has increased about 10 percent since 2011 and 60 percent since 2000, the U.S. Census estimates.

Does it make a difference? For your carbon footprint, yes. Total emissions to make and maintain a bike and fuel its rider is about 25 grams of carbon dioxide per mile, compared to 433 grams per mile to produce, maintain and drive a car, according to a 2011 report by the European Cyclists' Federation.

Healthier communities have more bike lanes and sidewalks. Researchers have found that cities and states with more bikers and walkers had less obesity and lower diabetes rates.

But drivers, at least in the United States, still get the bulk of transportation resources: For every $1 spent on transportation projects by states, about 2 cents goes toward biking and walking projects, according to an analysis by the Alliance for Biking & Walking.

"We need transportation choices and options in how we get out and about," said Christy Kwan, an outreach coordinator for Advocacy Advance. "It's important for our environment, health and economy."

I realize this is an article from the Associated Press but (and I don't mean this as criticism, simply observation), I just wish that there was a localized spin on this article as it relates to Jackson. The JFP has always done a great job at posting and promoting bicycle issues in Jackson and I know that bicyclists in the Metro are very grateful. So, (without being critical) but with local education in mind, I think its important for people who read this article to be made aware that this is not just an issue being tackled on the national level but that there are local (and very successful) efforts underway in Jackson to get more people biking along with statewide efforts in Mississippi that work toward increased spending for bike/ped projects, ridership and an effort to advocate for better street design.

Also, for anyone reading this article who might be wondering where Mississippi stands in the national scheme, the state was ranked this month as #31 in the national rankings as a Bicycle Friendly state - that is an increase of 5 spots from last year and up from a ranking of #47 in 2008. The progress that Mississippi has made to accept and advocate for building a better state for biking is phenomenal! That said, Mississippi is also one of the state's that spends the least amount of money on federal transportation related bicycle and pedestrian projects so thank you JFP for bringing attention to the need to invest in bike related spending as an environmental, health and economic development issue! Now, we just need more Mississippians to show the demand for a better and more inclusive transportation and to let our public officials and MDOT Commissioners know that we support investing in bike-ability and walkability as tools that can be used for increased access, connectivity and quality of life. If you want a better Mississippi, add your voice to the efforts for bicycle and pedestrian advocacy! Here is another link to a past JFP story for anyone interested in reading further as a local point of reference: www.jacksonfreepress.com/news/2013/se... Thanks again for bringing attention to this issue.

I biked about 10,000 miles around Jackson back in the 80s and 90s, mostly on back streets. My other hometown, Duluth Mn is just completing a citywide bike path system and even voted a tax increase to pay for it. We're a tourist town and this investment will soon be repaid by visitors from the Twin Cities.

The most popular trail is on north shore of Lake Superior. Another follows the Skyline Drive, which is 500-600 ft above the lake. Downhilling is available at the ski area Spirit Mountain.

Our late congressman James Oberstar was a tireless supporter of bike paths. One year he had the biggest "earmark" in all the land...and it was for bike paths all over the country.